Raging winds over the St. Lawrence have been stirring up waves there since August 25. Landbound observers scan the sea, sometimes managing to catch sight of a spout before it quickly dissipates in the stiff breeze. White wave crests can sometimes be mistaken for belugas, a phenomenon referred to in Tadoussac as “beluwaves” much more than “sheep”, as we call whitecaps in French. But prior to the windstorm, observations had been extraordinary…

North Atlantic right whales against the backdrop of Percé Rock

Off Bonaventure Islandin the Gaspé Peninsula, wind gusts catch the attention of a couple of pleasure boaters on August 17. They recognize blue whales, humpbacks, minke whales, and white-sided dolphins, but three black backs leave them puzzled. “I’m not sure what I’m looking at,” comments the captain. “The rostrum looks like a humpback, but not exactly. Their tails are not jagged, and are constantly being lifted out of the water. The fins are strangely squarish, never long and white.” Her crew mate posts a photo on the social networks. A friend identifies the species: North Atlantic right whale.

On the water, recognizing species is not always as straightforward as one might imagine. The North Atlantic right whale has dark skin like that of the humpback. Its smooth tail resembles that of a sperm whale. From a distance, its calluses may resemble the tubercles found on the rostrum of humpbacks. On the other hand, its very broad and squarish fins are particularly diagnostic. 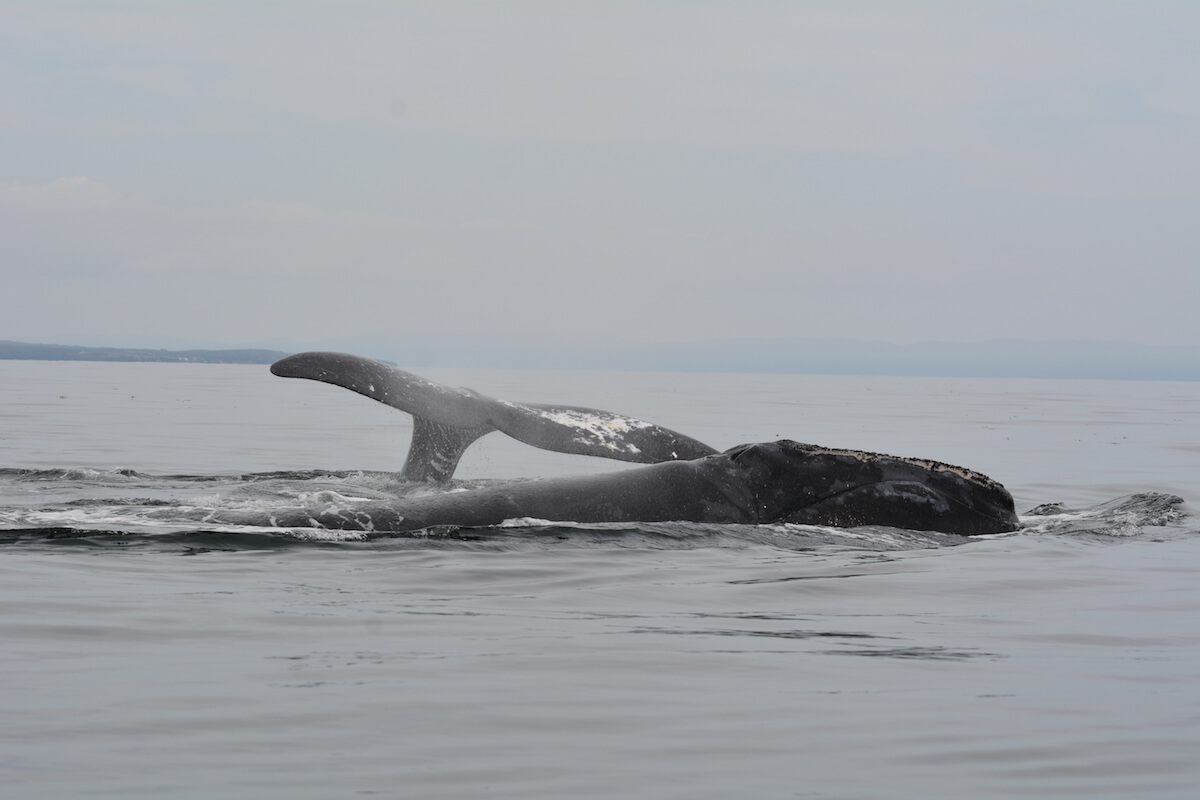 Smooth tail of a right whale, with the calluses on the head of another one. © Guylaine Marchand 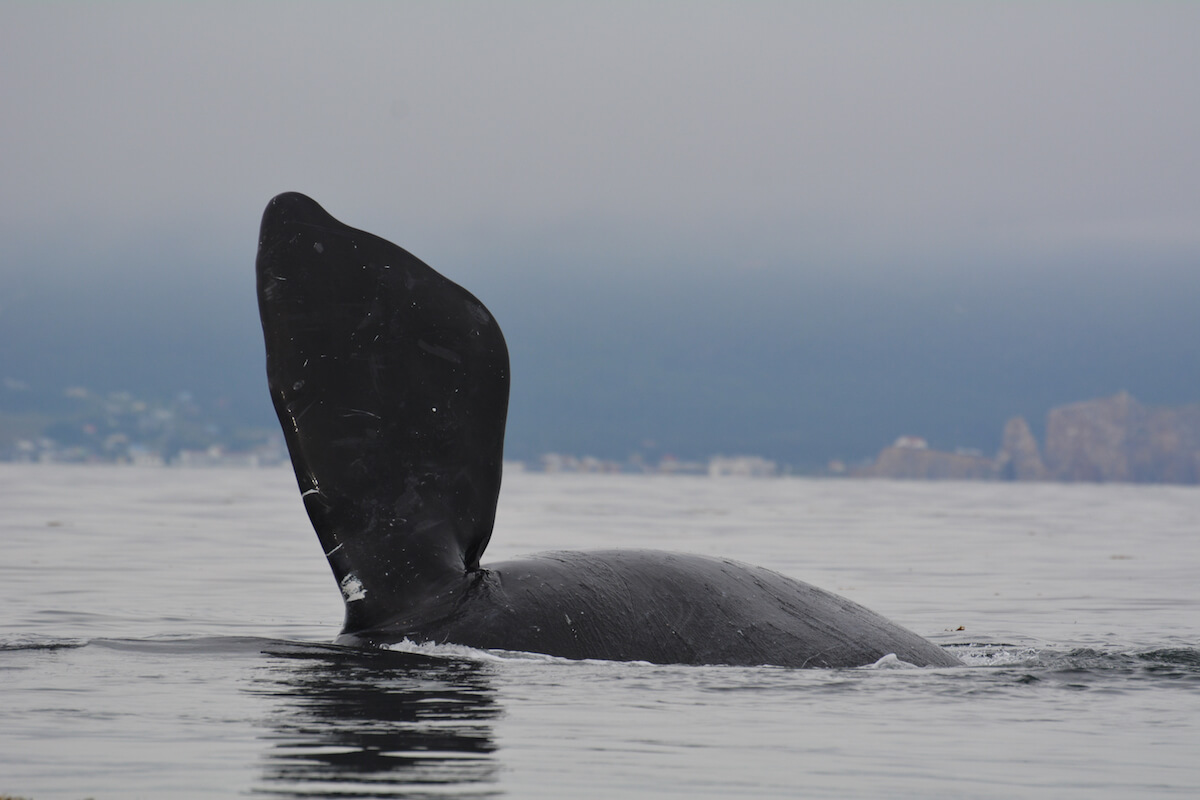 The North Atlantic right whale is endangered, with only about 400 individuals remaining. If you observe a right whale on the water, it is recommended to maintain a distance of 400 metres in order to give the animal plenty of room to carry out its essential activities. If you are interested in learning how to identify whales as well as best practices for navigating in their presence, a free-of-charge training is available online.

Abundance and diversity in the Saguenay-St. Lawrence Marine Park

A kayaker lets out a shriek of excitement on August 21. A tail as wide as a billboard has just emerged in front of him. No need to be so close to observe a whale this size! The tail is photographed by an observer from the Marine Environment Discovery Centre in Les Escoumins and forwarded to the Group for Research and Education on Marine Mammals. The individual is Jaw-Breaker, a female blue whale who is a regular in the Marine Park. In the St. Lawrence, a minority of blue whales (15 to 18%) lift their tail when they dive, and Jaw-Breaker is one of them. Another female is also identified: Crinkle. Crinkle doesn’t show her tail when she dives, but her wrinkly skin makes her easy to recognize. 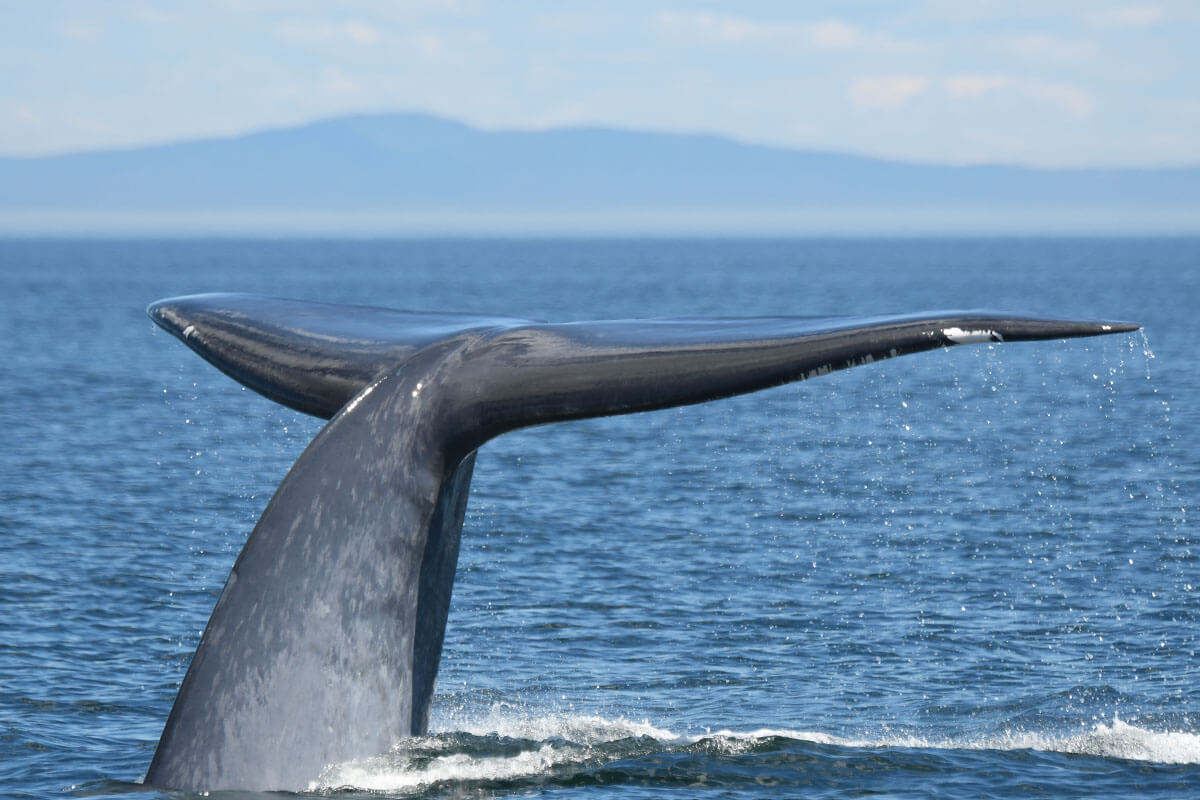 Jaw-Breaker dives in front of Les Escoumins on August 21. © GREMM

On August 23, a Marine Communications and Traffic Services worker in Les Escouminsmarvelled at the incredible variety of sightings she could make in a single day from her office window. She identifies one fin whale, nearly a dozen minke whales, twenty or so harbour porpoises and four herds of belugas totalling at least 75 individuals. If she hadn’t had to concentrate on her work, imagine how much more she might have seen!

On August 25, our collaborator Renaud Pintiaux is taken aback when he realizes what one grey seal has caught for its latest meal: a thorny skate. Seabirds also want in on the action. For several minutes, the photographer observes the squabbling between the birds and the seal, which devours its prey as quickly as possible.

That same day, opposite Cap de Bon-Désir in Les Bergeronnes, the narwhal is seen once again swimming with belugas. Then the wind picks up and smooths out their wake, leaving but a lasting memory of the observation for those who were lucky enough to be there. 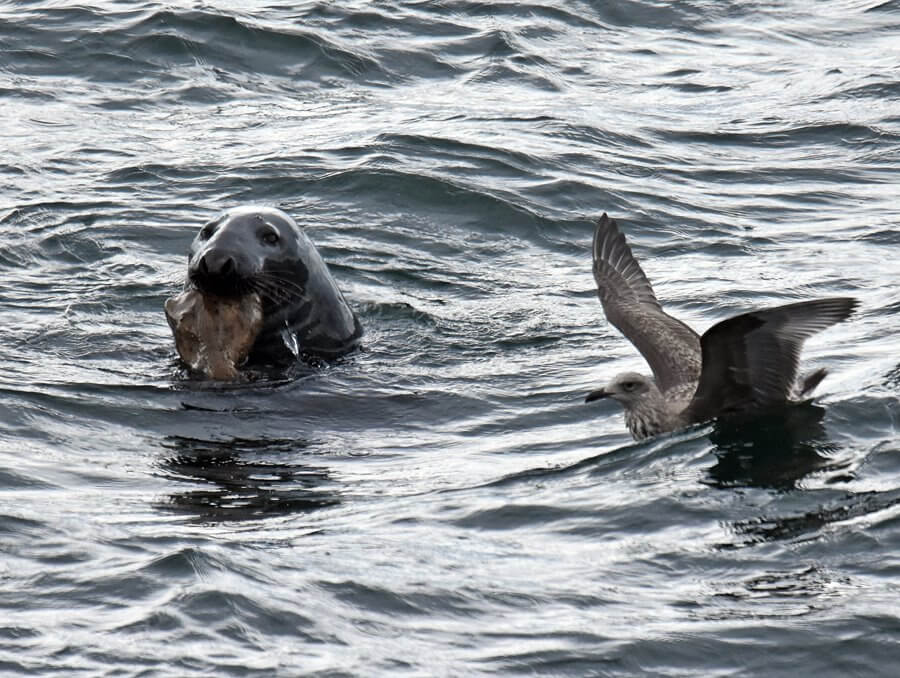