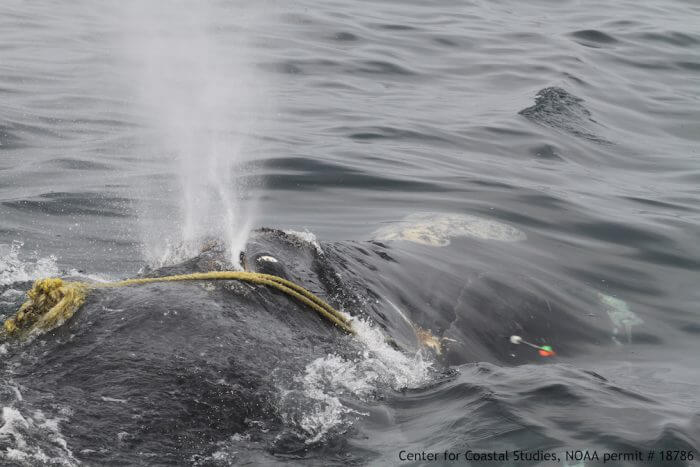 The right whale called Kleenex is taking a breath at the surface, just as the cutting arrow approaches the entangling rope around her upper jaw. © Center for Coastal Studies, NOAA permit #18786

Researchers call her Kleenex. Known since 1977, this right whale has been swimming with a rope wrapped around her head for 3 years now. On April 12, when she was seen by a team from the Center for Coastal Studies in Stellwagen Bank National Marine Sanctuary off the coast of Massachusetts, the rope was still present and the whale appeared to researchers to be weak and thin. An attempt was made to untangle the animal, and part of the rope was cut before the whale disappeared. Since then, weather conditions have not allowed researchers to return to sea to check up on Kleenex.

Kleenex represents a typical case of chronic entanglement; in fact, nearly 85% of right whales suffer a run-in with fishing gear at least once in their lifetimes. And while the snow crab and lobster season has been underway for a few weeks on the Canadian and US east coasts, protective measures have been put into place in both countries in an attempt to reduce the risk of mortality for these endangered whales. 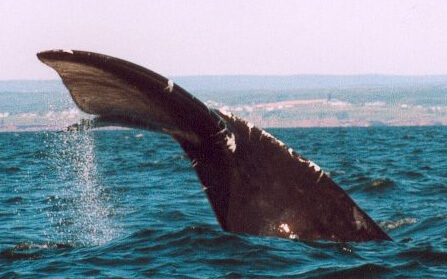 The right whale called Kleenex was photographed in 2002 in front of Gaspé, in the St. Lawrence gulf.

In Canada, Dominic LeBlanc, Canada’s Minister of Fisheries and Oceans, has announced that the ban on disentanglement operations would be lifted. A moratorium on this activity had been announced last July following the death of rescuer Joe Howlett.

One way to completely avoid entanglements (and ensuing rescue operations) would be to market rope-less fishing gear. “Two years ago, the researchers who came up with this brainstorm thought it was crazy. This year, prototypes are being tested by a few fishermen. Sometimes, solutions require one to think outside the box,” says Robert Michaud, scientific director of the Group for Research and Education on Marine Mammals and coordinator of the Quebec Marine Mammal Emergency Response Network.