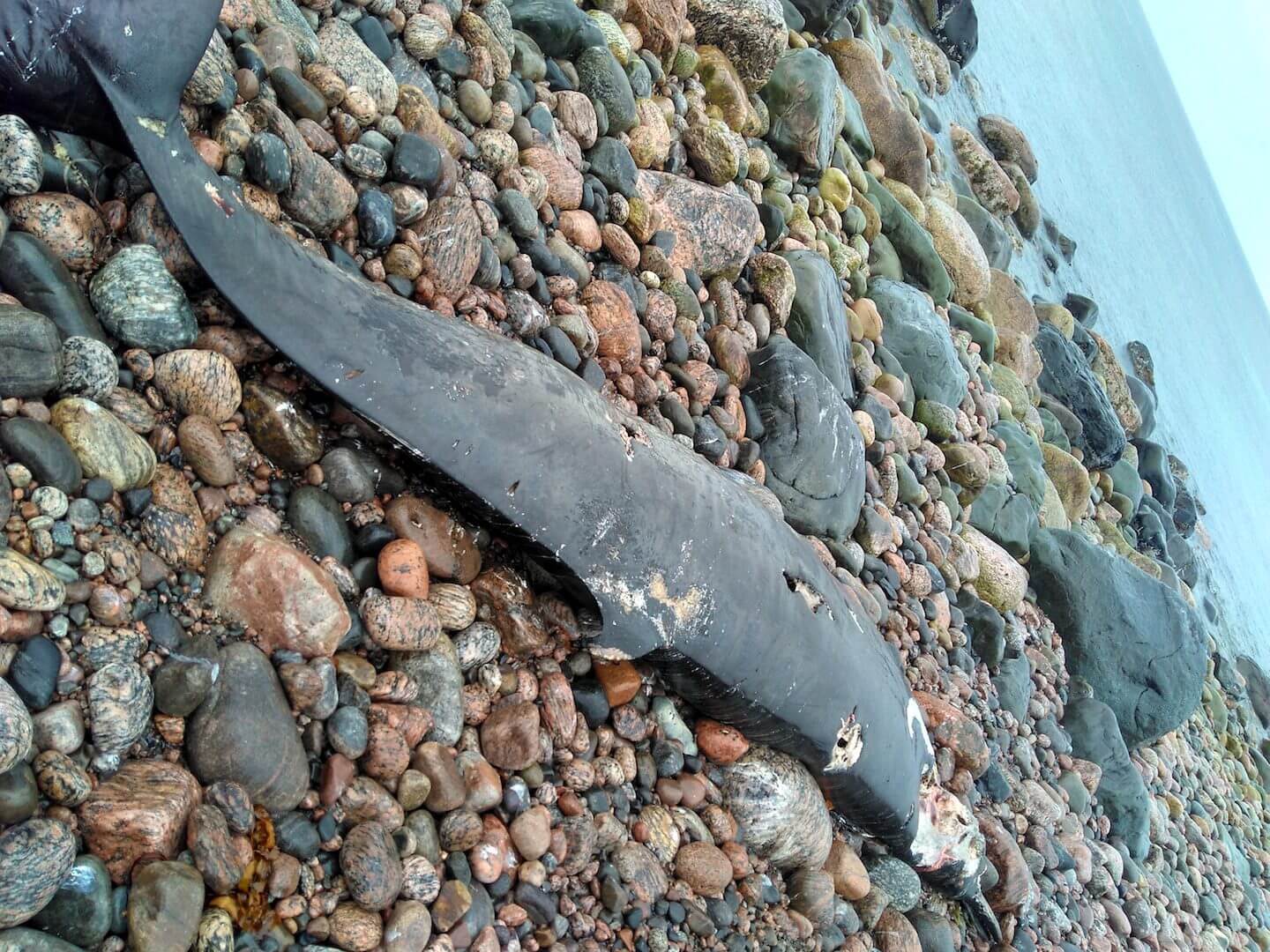 A beaked whale was discovered stranded in Rivière-au-Tonnerre on September 17. Initial photos of the carcass immediately intrigued the Quebec Marine Mammal Emergency Response Network. Traits that suggested that this case was special included the unusual colour pattern, the presence of what appeared to be a thin and elongated rostrum, and a lack of indentation in the tail. With the help of Smithsonian National Museum of Natural History (NMNH) and Dalhousie University, the carcass was identified as a Sowerby’s beaked whale, a rare species in these parts of ​​the St. Lawrence.

This incident kept the Network in suspense. The witness discovered the carcass during a stroll on the beach and promptly dialled 1-877-7baleine to report his find. Though intrigued, he wasn’t fully aware of what he was dealing with due to the appearance of the whale and its advanced state of decomposition. Upon viewing the first photos transmitted, it was clear that the carcass was not that of a porpoise or dolphin. We suspected that it was a beaked whale, but which species (there are 23 species of beaked whales)?

A volunteer was quickly dispatched to the scene. After several hours of searching in a difficult-to-access area with few inhabitants, the volunteer located the carcass again before it was washed out with the tide. The information collected (size, sex, photos) during the volunteer’s intervention was sent to several beaked whale specialists. NMNH’s Kerri J. Smith and Laura J. Feyrer of Dalhousie University lent a hand and confirmed that the recovered specimen was a Sowerby’s beaked whale. 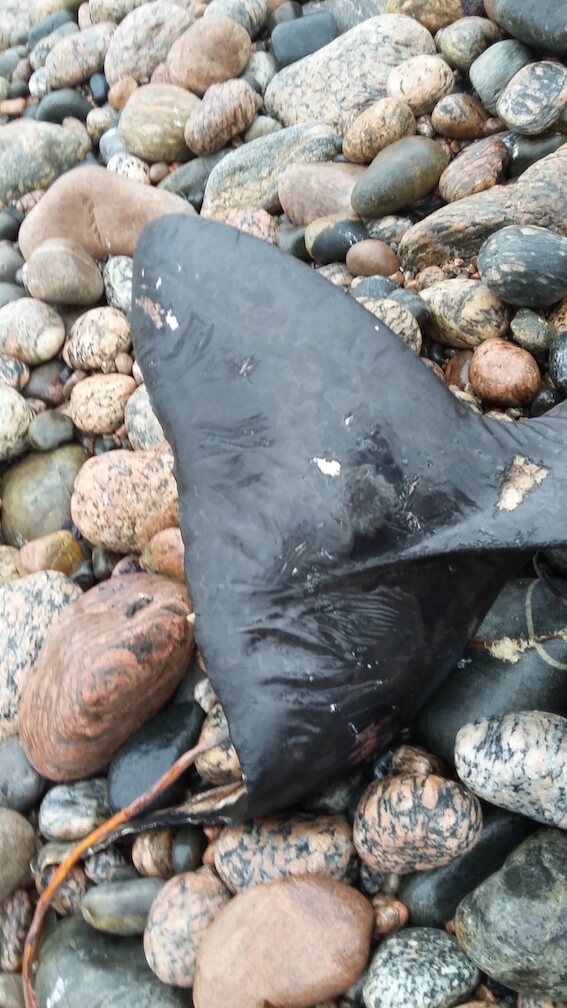 The lack of indentation in the tail helped identifying the species. © Stéphane Pagès

There is little information on the Sowerby’s beaked whale, and sightings of live specimens are rare. What is known about this whale is essentially due to stranded carcasses. Dead Sowerby’s beaked whales have been found in Quebec in the past: Forillon Park in 2006, Île aux Pommes (in French) in 2013 and in Escuminac in 2016. In Canada, it is thought that this species lives mainly in deep waters (500 m and more) along the continental slope of Nova Scotia, near the Northeast Channel, the Gully, Shortland Canyon and Haldimand Canyon, making these discoveries particularly valuable for studying their range. 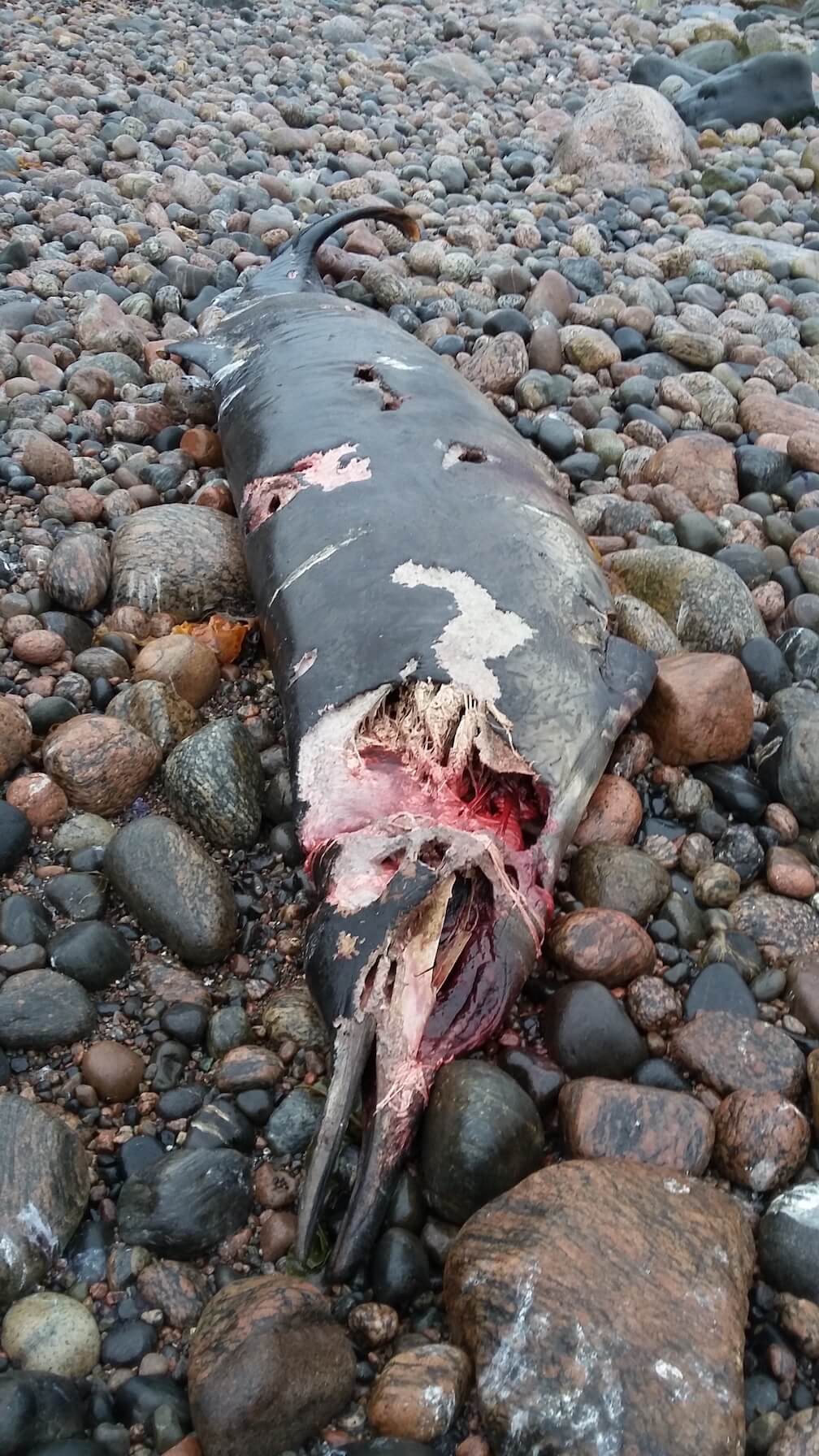 Samples of the Rivière-au-Tonnerre carcass were collected for genetic analysis. Skin, fat and muscle samples were taken and a second sampling is planned to recover the animal’s jaw. Samples collected from the carcass will be shared with NMNH and Dalhousie University. As it is a female, the single pair of teeth is not visible, as according to Laura J. Feyrer, the teeth in female beaked whales are smaller and do not erupt (Translator’s note: from the gums). If the pair of teeth is located in the front of the jaw, it is a True’s beaked whale and if it is in the middle of the jaw it is likely a Sowerby’s beaked whale.