November 20, Cap de Bon-Désir in Les Bergeronnes: our collaborator Renaud Pintiaux settles down to take a few pictures of local marine life. He is happily observing a minke whale when the powerful spout of a blue whale erupts from the surface. How does he know it’s not a fin whale? The bump surrounding its blowholes is more protruding. Its dorsal fin is generally smaller and more triangular as well. And, of course, the bluish-grey speckling is distinct from the dark grey colour of the fin whale.

The blue whale off Cap de Bon-Désir heads downstream, vigorously swimming away from the rocks. Renaud leaves the site to try a new spot about ten kilometres away, this time at the wharf in Les Escoumins. The blue whale reappears and continues its journey down the St. Lawrence. “It’s swimming fast! I don’t think we’ll see him again this year,” he exclaims. He manages to take a few snapshots that might allow St. Lawrence blue whale specialist Richard Sears to identify it. After the departure of the largest animal on the planet, Renaud spots a dozen or so brawny white belugas.

Off the dunes of Tadoussac, the migratory bird surveyor is recording less avifauna these days, which gives him a little more time to scan the waters offshore. Nearly every day, he is delighted to see the splashing manoeuvres of surface feeding minke whales. On November 19, two column-shaped spouts spurt up like geysers. A larger whale swims in front of a smaller-looking one. Even through the spotting scope, it’s impossible to confirm whether they are fin whales or blue whales.

Four days earlier, near the Prince Shoal Lighthouse opposite Tadoussac, a freighter captain crosses paths with two humpbacks. Surprised, he writes, “What are they still doing here?” Perhaps these two individuals are not breeders and are less in a hurry to join their peers in the warmer waters of the Caribbean. Or maybe they are enjoying the still ice-free waters to continue building their reserves for next season.

Near Baie-Comeau, a worker on the wharf is excited to see three minke whales feeding on the surface. For over an hour, he is able to observe their dynamic movements. Minke whales feed not only on small fish, but also on krill.

In Port-Cartier, a large blast is spotted offshore on November 16. Closer to shore, a minke whale has been feeding regularly. The occasional harbour seal also pops up its head.

Out in the Gaspé Peninsula, in Cap-des-Rosiers, whales have faded from the landscape, but a few harbour seals are observed near the beach. 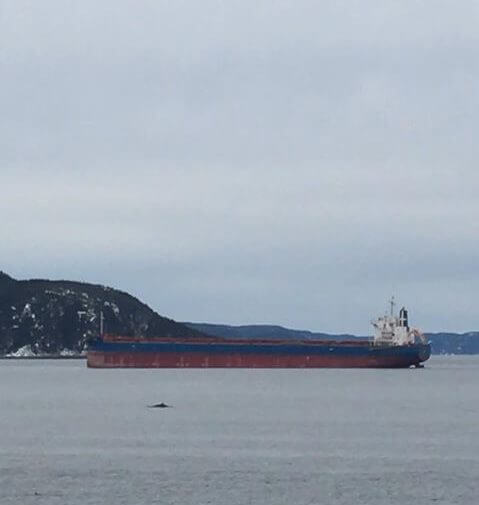 A minke whale is feeding near the wharf of Baie-Comeau. © Pascal Pitre
Observation of the Week - 21/11/2019