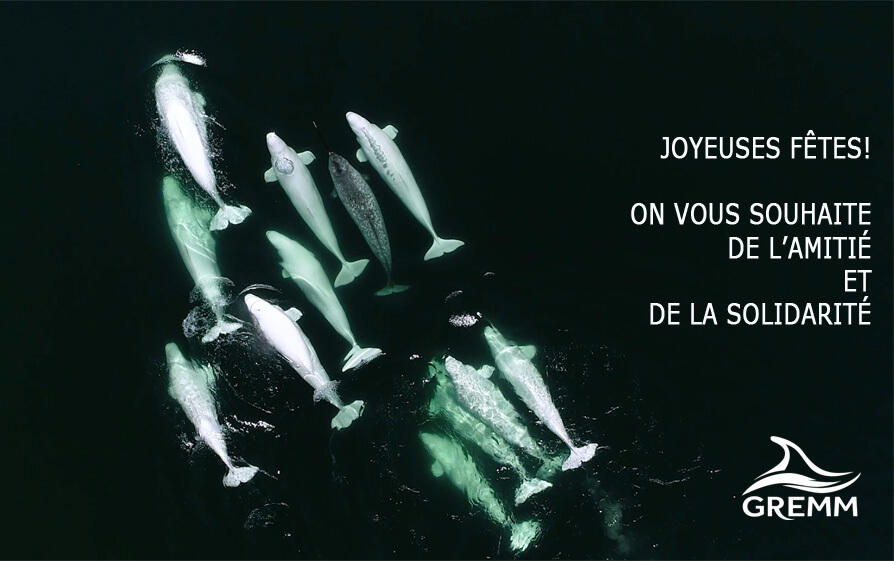 Cap-d’Espoir, December 15. The black backs of two humpback whales emerge from the dark water. Their rounded spouts and the appearance of their tails at the end of their breathing sequence make it possible to identify their species.

On December 16, three tall blasts glisten in the morning light off Sainte-Thérèse-de-Gaspé. Side by side, the three animals swim westward toward the heart of Chaleur Bay. These individuals are impossible to identify given the distance they are swimming from the coast. They are late in their migration; perhaps they are enjoying one last meal before embarking on the long journey to their wintering grounds, thousands of kilometres away. Depending on the species to which they belong, they will migrate somewhere farther south or to the middle of the Atlantic. Nevertheless, every year, whales are observed during the holiday season. Perhaps you will spot a giant on your next stroll along the beach or the next time you take a ferry.

That same day, a fin whale carcass is spotted at sea, not far from the large spouts of the three whales. The carcass keeps the Quebec Marine Mammal Emergency Response Network in suspense. Volunteers and local residents helped track the movements of the drifting animal, and when it finally washed ashore, samples were taken. Perhaps they will reveal what caused this fin whale to perish.

The Beauty of Pinnipeds

On December 14, our collaborator René Roy boards the F.A. Gauthier, which connects Matane to Godbout. The ferry works its way through the ice that carpets the river “from shore to shore”. On these floating chunks of ice, he observes nearly a thousand harp seals. At the Godbout ferry terminal, René Roy admires a few of his own photos that have been blown up and hung on the walls. The Matane terminal, on the other hand, features photos of birds courtesy ornithologist Christian Bélanger.

The video provides but a glimpse of the magic of the moment, according to dazzled observers posted at the Pointe-au-Père wharf near Rimouski on December 16. Thousands of harp seals are resting on ice near the coast, under a sky decorated in its finest pageantry. This sight is not so common: harp seals generally prefer offshore ice to nearshore ice. It’s no wonder that part of their Latin name, Pagophilus, translates as “ice-loving”!

On Ferguson beach in Sept-Îles, seals looking for a place to rest opt for sandy ground instead. Winter larids such as glaucous and Iceland gulls are also observed, as are common mergansers, also known by their nickname “sawbills”.

The chronicle of weekly observations will be on holiday through January 11, 2019. We would like to thank all our observers for having relayed their fabulous encounters with the marine mammals of the St. Lawrence.