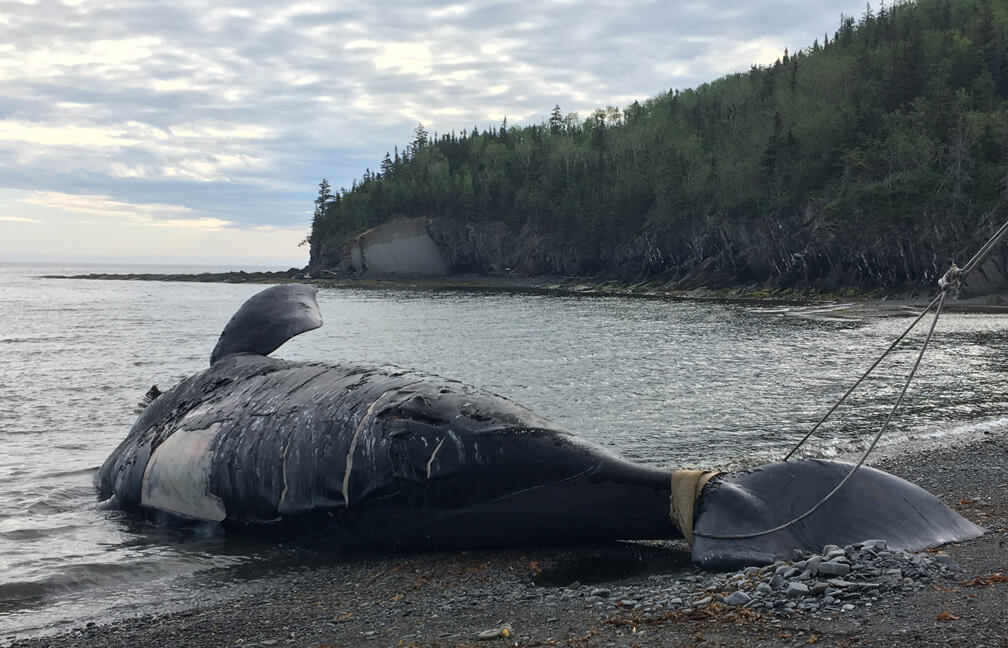 Preliminary results of the fourth North Atlantic right whale necropsy have just been announced by Fisheries and Oceans Canada. The whale known as Clipper probably died as a result of a ship strike. This result echoes that of two of the other three necropsies.

The necropsy was conducted on July 1 at the Grand-Étang rest stop near the town of Cloridorme in the Gaspé Peninsula. The work was a collaborative effort between teams of veterinarians from Université de Montréal and the Atlantic Veterinary College (University of Prince Edward Island), supported by US experts and volunteers from the Quebec Marine Mammal Emergency Response Network.

Clipper was first identified alive in the Gulf of St. Lawrence on June 4, 5 and 10. Then, on June 28, her carcass was spotted during aerial surveys conducted by Fisheries and Oceans Canada, approximately 100 km off the Gaspé Peninsula. This was the sixth carcass to have been found in Canadian waters in 2019.

On June 30, right whale #4400 was observed entangled in fishing gear off Miscou Island, New Brunswick. The juvenile right whale born in 2014 was in an area that had been closed off to fishing since April 28. The Campobello Whale Rescue Team, which specializes in disentangling whales, is waiting for better weather conditions before attempting an intervention. She has not been seen since.

June 4: Discovery of a right whale carcass, which was identified as Wolverine, a male born in 2010.

June 7: Necropsy of the right whale in Miscou, New Brunswick. Analyses failed to identify the exact cause of death.

June 26: Discovery of a fifth carcass on Anticosti Island, Quebec.

June 27: Discovery of a sixth carcass, that of Clipper, off the Gaspé Peninsula.

June 28: Necropsy of Comet in the town of Norway, Prince Edward Island.

July 1: Necropsy of Clipper in Grand-Étang, Quebec. Preliminary results of the necropsy show that the mortality was caused by a collision.

Snapshot of the six right whales

Special thanks goes out to the New England Aquarium’s Anderson Cabot Center for Ocean Life for the information contained in the North Atlantic right whale photo-ID catalogue. To read the complete portraits, click on the names of the whales.

Wolverine
Identification: #4023
Sex: Male
Parent: Female #3123
Year of birth: 2010
Life events: Collision at age 5 with an engine propeller, which left this individual with three large scars. During the first five years of his life, Wolverine was seen entangled three times, with two of these entanglements considered minor and one moderate, according to the standards developed by the New England Aquarium.
Cause of death: necropsy results inconclusive to identify the cause(s) of mortality.

Punctuation
Identification: #1281
Sex: Sex: Female
Age: approx. 40 years
Calves: at least 8, two of whom also had calves of their own
Life events: Struck by ships at least two other times. Entangled at least five times.
Cause of death: trauma corresponding to the after-effects of a ship strike.

Comet
Identification: #1514
Sex: Male
Year of birth: before 1989
Cause of death: trauma corresponding to the after-effects of a ship strike.

Unnamed whale
Identification: not known
Sex: female
Year of birth: before 2008
Cause of death: Due to the advanced state of decomposition, no necropsy will be performed. Sampling could be performed at sea. At the moment, no information on the cause of death.

Clipper
Identification: #3450
Sex: Female
Age: Unknown
Calves: 1, in 2016
Life events: Has experienced at least one other collision, during which much of her caudal fin was severed, hence her nickname “Clipper”. Also experienced two minor entanglements.
Cause of death: trauma corresponding to the after-effects of a ship strike