Protecting belugas from increasing shipping traffic in the arctic 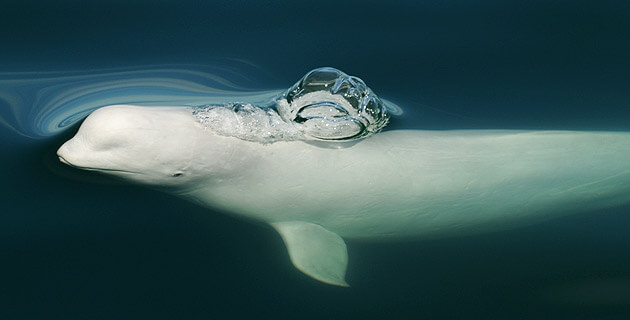 The increase of marine traffic will have an impact on beluga behavior and prey availability. © GREMM

The Arctic is undergoing a transformation. Melting pack ice is opening up new shipping routes and setting the stage for an uptick in human activities in the region. How can we minimize the impact on the belugas of western Hudson Bay, which gather to form the largest summer concentration of their species in the world? Researchers tracked nine belugas using satellite transmitters to visualize how their habitat overlaps with shipping routes.

According to the 2017 international report SWIPA – Snow, Water, Ice, and Permafrost in the Arctic, the Arctic Ocean will be largely ice-free in summer by 2030, if not even earlier. In Hudson Bay, the ice-free period has increased by an average of just over one day a year since the 1980s.

Thousands of belugas (approximately 50,000 according to the latest survey, conducted in 2015) spend the summer in western Hudson Bay, mainly in the estuaries of the Churchill, Nelson and Seal Rivers. This region has therefore been designated as an Ecologically and Biologically Significant Area (EBSA). Censuses suggest that the beluga population in western Hudson Bay is currently stable, but melting sea ice may affect this population by impacting the availability of prey and the intensity of shipping traffic. Studies have shown that belugas react to the presence of boats by altering their behaviour such as modifying their swimming trajectory or the sounds they emit. Noise pollution can reduce the amount of time animals spend feeding or how efficient they are in this vital activity, in addition to masking communication between individuals. Chronic exposure to anthropogenic sounds might even result in marine mammal populations abandoning certain habitats.

To identify and map the habitat used by belugas in this region, researchers from Washington State University and Fisheries and Oceans Canada attached satellite transmitters to nine belugas and tracked their movements between July and October 2015. They then took this map and superposed it on the map of shipping traffic for the same period.

The study demonstrates that the belugas in western Hudson Bay are at present exposed to relatively little shipping traffic, as the latter is still of low intensity. Such traffic is concentrated mainly along specific routes that converge on the ports of Churchill and Arviat. Areas where the risk of encounter between belugas and vessels is highest are currently around these two ports and along the corridor that connects them.

With the anticipated increase in marine traffic in the region, such areas of cohabitation between boats and belugas may soon become more intensely navigated. In the researchers’ view, “Targeted measures to reduce the risk of collision and behavioural disturbance in such areas should be put in place to minimize potential impacts on the population.” Multiple protective measures are possible: speed reductions for ships, voluntary suspension or prohibition of navigation in certain areas, rerouted shipping lanes, etc.

Simulation models have been developed in recent years to test the effects of various protection measures on the risks of ship strikes and disturbance to whales in the St. Lawrence. Could such models be used in the Arctic to gauge the impact of planned development projects and possible protection measures?