Porpoises are usually expected in these parts beginning in late June. But this year, at least two harbour porpoises have already been observed off the coast of Sept-Îles. A crew member on board the Bella-Desgagnés first spotted them on April 25 as the ship passed by the western tip of Anticosti Island. Another individual observed two harbour porpoises (maybe the same ones, maybe not) on April 28 in the same area.

The harbour porpoise is a seasonal visitor to the St. Lawrence, but an analysis of bycatch in the 1970s shows that some porpoises even overwintered in the St. Lawrence Estuary. Has the situation changed since then? Since the species is not endangered, the harbour porpoise is not a major focus of study, so we don’t have the answer to this question.

Roughly the size of a small human (around 1.6 m), the harbour porpoise can easily go unnoticed, which makes it all the more difficult to monitor. Even a newborn beluga is as big as an adult porpoise! Its small size also makes it prime prey for great white sharks and killer whales, in addition to being the target of attacks from dolphins and grey seals. Who ever said porpoises had an easy life!?

The following day, once again off the coast of Sept-Îles, two minke whales were sighted, one in the bay of Sept-Îles and the other opposite Ferguson beach. A harp seal is also observed in the area, as are many migratory seabirds.

No, it’s not the name of a robot, but rather the identification number of a fin whale in the St. Lawrence Estuary photo-identification catalogue. The letters B and p refer to the abbreviation of the species’ scientific name, Balaenoptera physalus. Bp2805 is photographed on April 24 opposite Les Bergeronnes. Known since 2017, this fin whale has been seen every year since then. During the summer of 2020, Bp2805 was observed in the Saguenay-St. Lawrence Marine Park from July to October. Will it stay that long again this year? In any case, it made a noteworthy arrival as a sort of pathfinder.

In the port of Matane, a white back appears. The observer is surprised to find a beluga all alone here. In spring, belugas leave the Gulf, where they spent the previous winter, and return to the Estuary. It happens that some belugas linger a little longer than others on the path of this short migration. Since then, the solitary beluga seems to have resumed its journey. 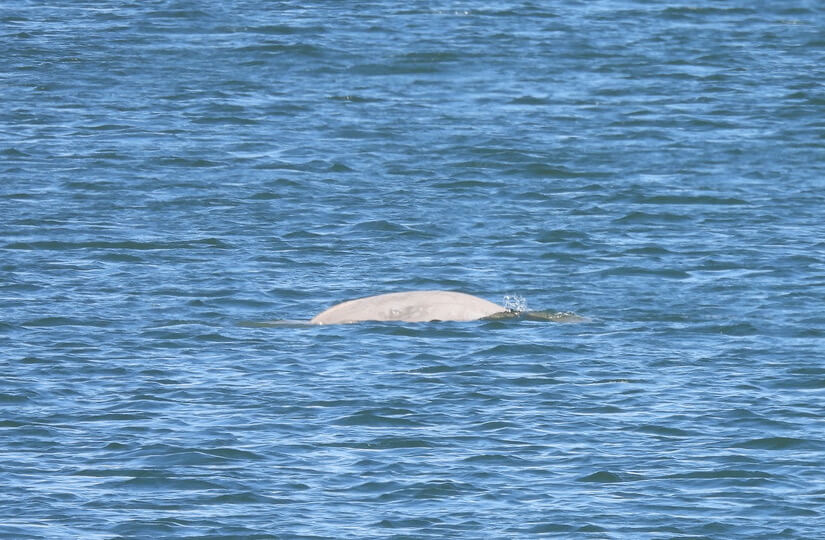 There are laggards… and then there are trailblazers! Transport Canada and Fisheries and Oceans Canada have resumed aerial surveillance of the Gulf for the presence of North Atlantic right whales, an endangered species that numbers only around 350 individuals. By its very presence, the first right whale observed on April 24 in the Cabot Strait, northeast of the Magdalen Islands, triggers the closure of a fishing area to prevent it from getting ensnared in fishing gear. Over 80% of North Atlantic right whales have gotten themselves entangled in fishing gear at least once in their lives, and bycatch is a leading cause of mortality. Last year, fishing area closures helped prevent such incidents, so much so that not a single entangled whale was detected in Canadian waters.

On April 20, a resident of Les Bergeronnes observes a group of… Hmm. She’s intrigued. The animals don’t look like the large herds of belugas that she’s accustomed to seeing, yet she does notice some white on their skin. She isn’t able to make out a dorsal fin, but the animals are very far from shore. Their swimming style reminds her of that of harbour porpoises. It is still early for a large herd of porpoises, but it is not impossible. Dolphins, perhaps? In spring and fall, Atlantic white-sided dolphins occasionally make brief incursions into the Estuary. Or was it a herd of harp seals – an animal similar in size to a porpoise and with a partially white coat – swimming in small leaps? That’s the way it goes when it comes to watching wildlife! Even if we are unable to confirm the species, encountering animals is always a moving experience.