How many belugas can you count? There is probably as many under the surface. © GREMM

In the course of our round of calls, most of our observers say they are delighted to be seeing migrating birds, but regret that they don’t have much in the way of whales to report. The ice on the St. Lawrence has broken up, however. It shouldn’t be much longer then, as whales usually become more numerous with the arrival of spring.

In the Port-Cartier area, after a few very calm days, large spouts erupt on the horizon on the morning of April 8. Two large rorquals are seen swimming south-southeast of Île Grosse Boule. The animals are swimming about two nautical miles from the coast. At this distance, it’s difficult to identify the species. Did these animals just arrive from their migration or did they spend the entire winter in the St. Lawrence? It’s impossible to know.

In Tadoussac, the seascape is regularly punctuated by the white backs of belugas. On April 7, a small group of six or seven belugas are swimming off Pointe-Noire. Some of them still have grey skin, an indication that they are rather young. Indeed, belugas turn completely white between 12 and 16 years old. The following day, they are closer to a dozen in number, once again including both white and grey individuals.

On April 6, in front of her home in Anse-au-Sac, near Saint-Irénée, an observer marks a paper with an X every time she spots a beluga. Over the next half hour, she accumulates twenty or so X’s. “Sometimes I would see three at a time, but I can’t say how many there were. They were easy to observe; the river was peaceful and dark blue in colour; it was a beautiful time of day, with a spectacular golden sun bringing out the dazzling whiteness of the belugas. But they are so difficult to count!”

Even for scientists, tallying belugas is no easy task. Their often tight swimming formations can lead to confusion when observed from the side. And even during an aerial survey, it is not so straightforward. It must be taken into account that belugas will be diving during the overflight and that certain areas will not be visible to observers or photographers. In summary, this is why the size of a whale population is usually an estimate rather than an exact figure.

Harbour seals, grey seals and harp seals are being observed these days. On April 3, in Tadoussac, Renaud Pintiaux managed to photograph a grey seal feasting on a lumpfish. This benthic fish usually lives in water depths of 50 to 300 metres. Even if it is not particularly appreciated by humans, it seemed to be a choice meal for this grey seal, and for a few birds who made short work of the scraps! Lumpfish, also known as lumpsucker, is farm raised for its roe. In fact, a company in the Gaspé Peninsula is working to develop this delicacy. It is easy to understand then why French speakers sometimes nickname this species “sea hen”! 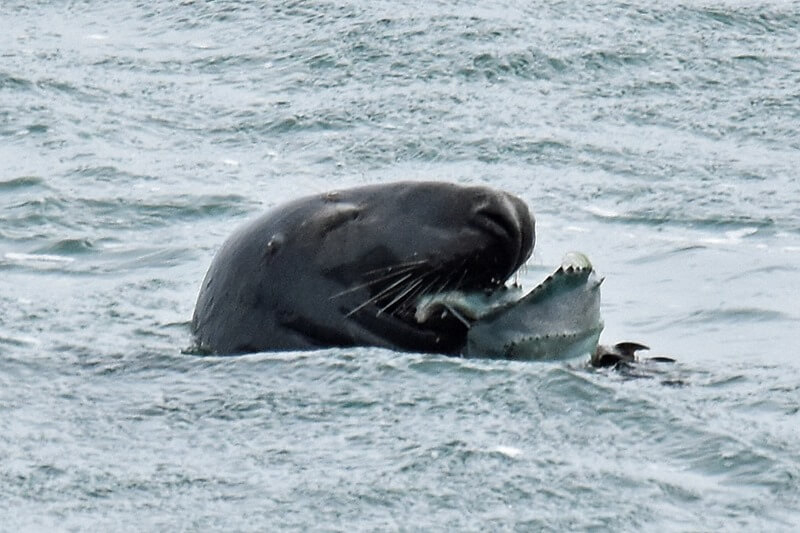 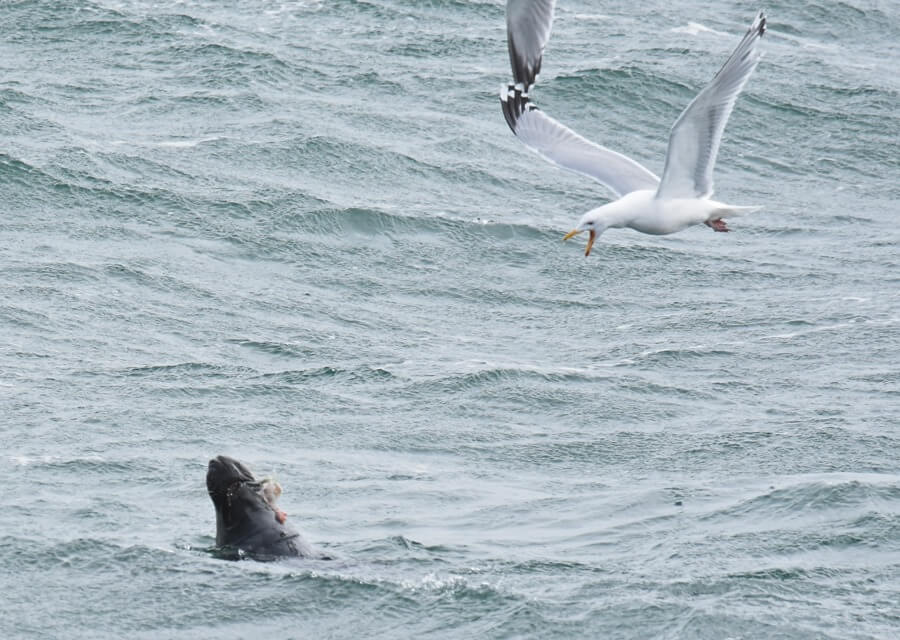