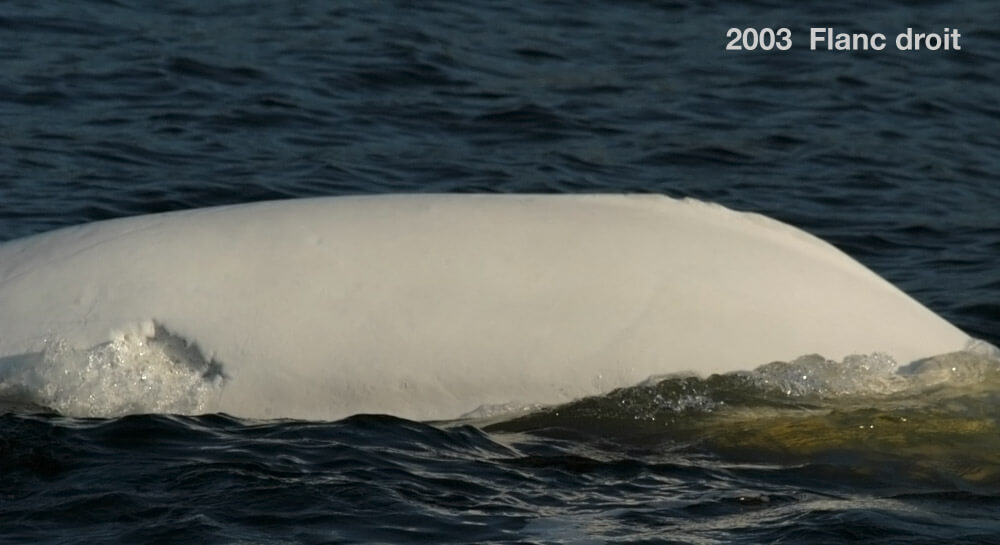 Adopted by The Minister of Sustainable Development, Environment and the Fight against Climate Change, David Heurtel

Écho differs from other belugas by the deep, broad and irregularly-shaped scar he shows on his right peduncle. He can also be recognized from both sides by the gashes in his dorsal crest. 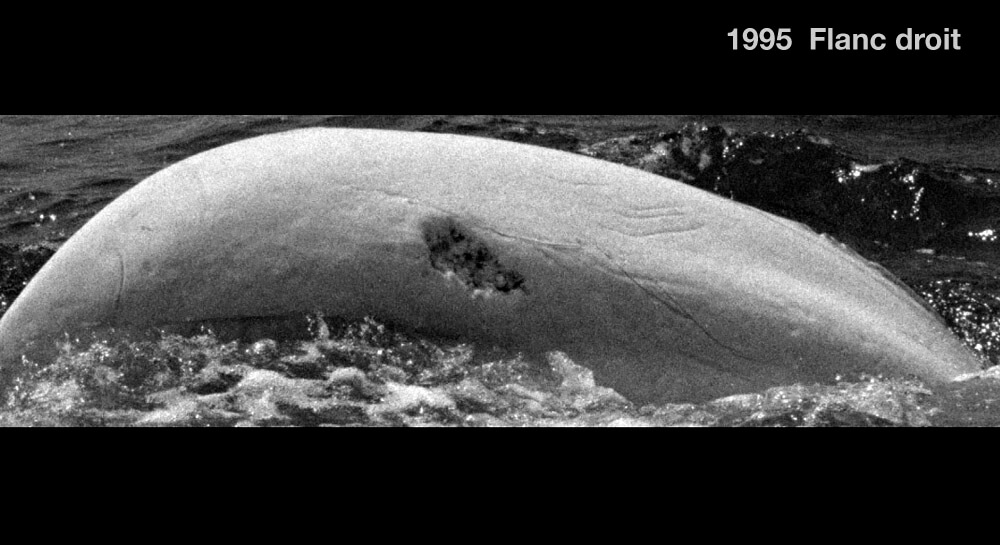 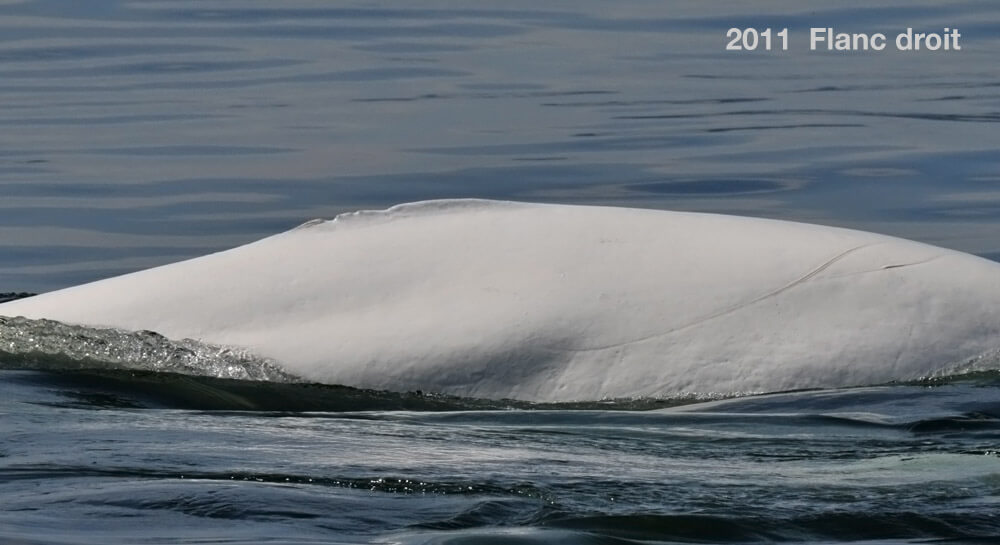 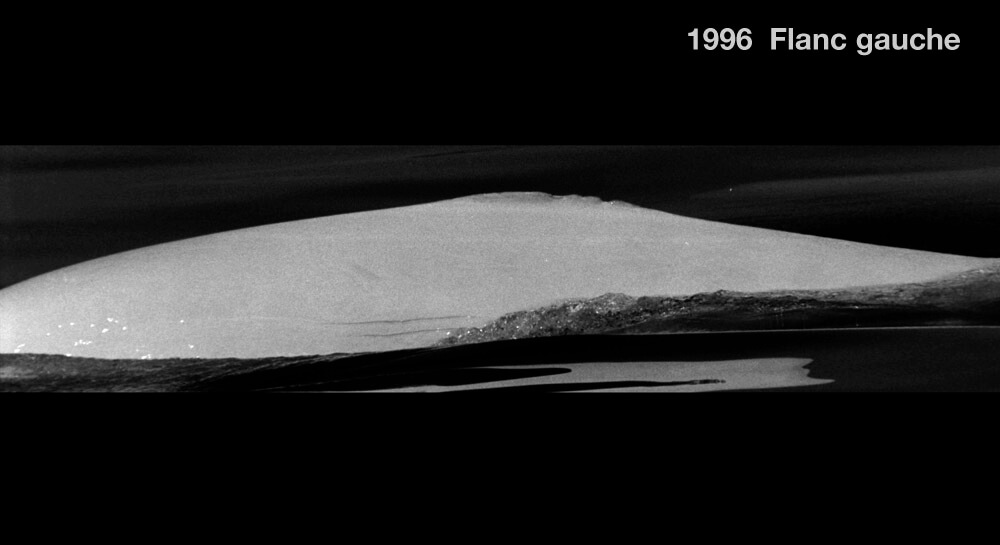 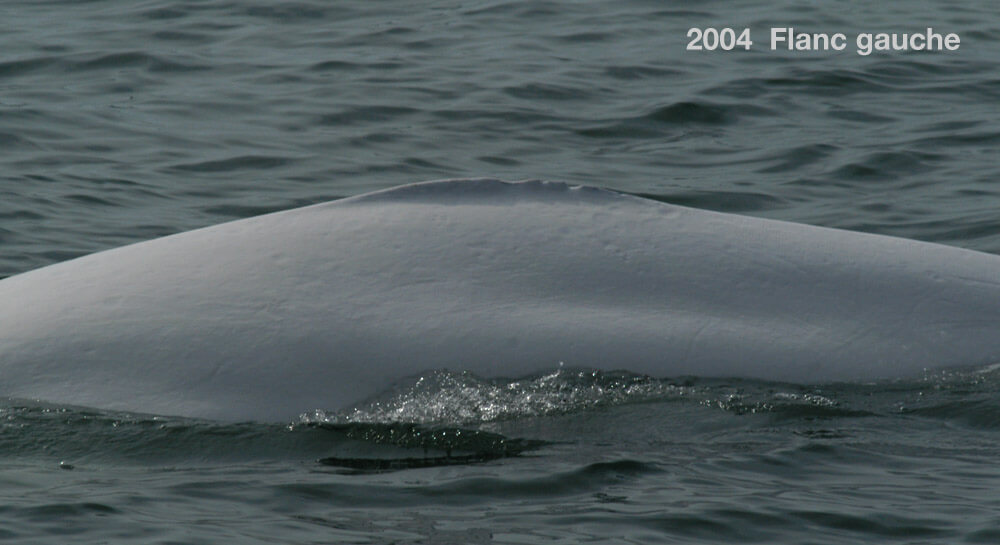 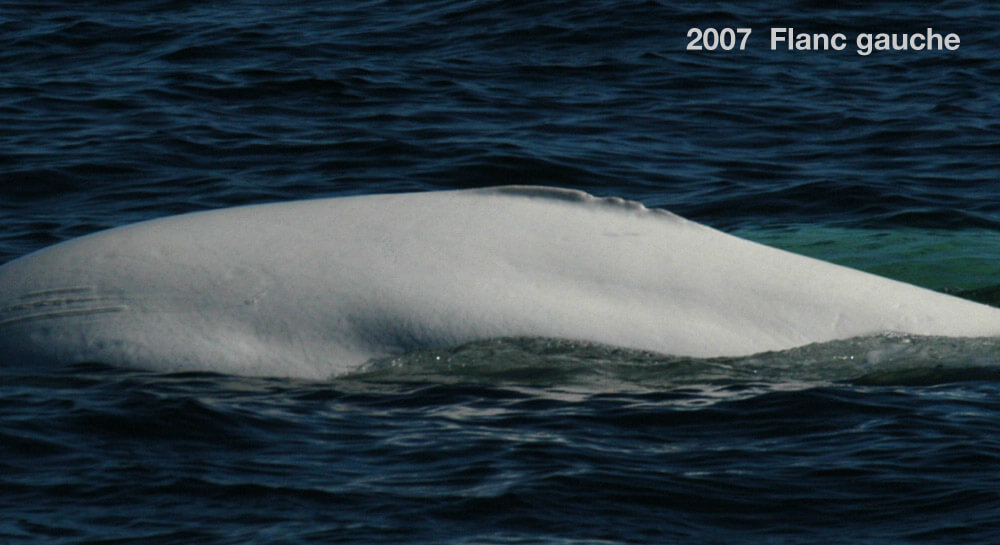 It was in 1991 that we encountered Écho for the first time. At the time, he was slightly gray, almost white. Beginning in 1993, he was always noted as being “white”. Belugas fade from gray to white in colour between the ages of 12 and 16. Écho would therefore have been born in the early 1980s.

His sex was confirmed by genetic analysis of a tiny piece of skin (biopsy) taken from his back in 1995: Écho is a male. He is affiliated with one of the two networks of males that ply the waters of the Saguenay Fjord and the head of the Laurentian Channel. A third network, the “Downstream Boys”, also uses the head of the Laurentian Channel and the downriver portion of the Estuary. Even if their territories overlap, individuals from one network seldom come into contact with males of other networks.

With the years, males have a tendency to form stable groups of companions. These associations are established gradually and may play a role in belugas’ reproductive lives. Écho’s usual companions include DL0492, DL0124 and DL0503.

How Écho’s story and those of his companions unfold will teach us volumes on the evolution of belugas’ social lives. By better understanding how belugas live, we will better be able to protect them.

We spotted Écho again near Les Bergeronnes and photographed him with a very large herd of belugas consisting of about one hundred white adults. We follow the herd south. At the end of the day, the belugas disperse and leave the sector.

We’re in the mouth of the Saguenay Fjord. We catch sight of Écho in a herd numbering about 150 belugas, adults and young alike. Within this herd, there are at least 30 groups of belugas. Simply amazing! The mouth of the Saguenay is a meeting place. Here, male belugas regularly cross paths with herds of females accompanied by young. Such large gatherings are typically brief, however, often just long enough to share a meal! The strong currents at the mouth of the Saguenay act as genuine barriers where food sources concentrate.

July 28, 2004: we observe Écho off of Île Blanche, in the Rivière-du-Loup sector. He is swimming in a herd of 40 belugas. Within the herd, we notice a few entirely white individuals, though 70% of them are gray or slightly gray. The herd is composed mostly of young belugas, grays and others that we refer to as “dirty white”, which are less than 20 years old. The animals are active and are milling, which consists of swimming in circles and diving and resurfacing multiple times at the same spot. This behaviour is often associated with feeding. We attempt to place a VHF radio tag on one of the individuals, but we miss our target! Toward the end of our encounter, the animals begin to head upstream.

The Bleuvet is positioned south of Île Blanche, which lies off Saint-Siméon. We’re observing a herd of about 80 individuals, comprising roughly equal numbers of adults and juveniles. The animals are relatively stationary, calming swimming and diving and returning to the same spot. We attempt a biopsy on one animal whose dorsal ridge shows several notches. Bull’s eye!

The herd splits into two: the white adults head toward Cacouna, while the gray youngsters continue swimming and diving where they are. Back in the lab, we meticulously examine the photos. We are able to identify Écho and many of his faithful companions: DL1229, DL2140, DL0492, DL0619 and DL0125.

The Minister of Sustainable Development, Environment and the Fight against Climate Change, David Heurtel, adopted DL0206 (2014).

As part of the contest initiated by the Minister last March, students from Louis-Joseph-Papineau high school in Montréal’s Saint-Michel neighbourhood submitted their brainstorms for names for DL0206.

Read more about this event here!