Observations Reduced to a Trickle 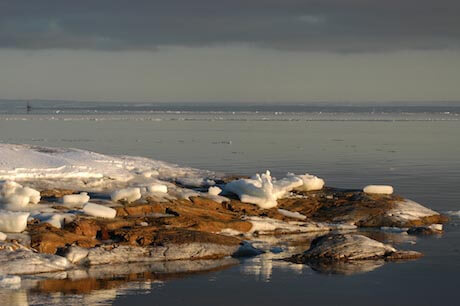 Don’t be surprised: February is a quiet period in terms of the presence of whales in the St. Lawrence. Nevertheless, three spouts were reported off Godbout on February 6, in addition to reports of seals present in the Gulf of St. Lawrence and the Saguenay Fjord.

Our diligent observer in Franquelin, in the Côte-Nord region, reported a few harp seals here and there in recent weeks, spotted amongst a raft of some twenty common goldeneye. This diving duck differs from its “cousin”, the Barrow’s goldeneye, by the greenish reflections on its head and the white on its flanks and wings. In addition, the common goldeneye has a round white spot below the eye, a long bill and a sloped forehead, while the Barrow’s goldeneye has a steep forehead, a short bill and more of a crescent-shaped white marking between the bill and eye. Also, the common goldeneye is more abundant than the Barrow’s, a species at risk; the wintering population of Barrow’s goldeneye in eastern North America is estimated at about 4,500 individuals, or 1,400 couples. Specific population trends are unknown, though it is believed that the eastern population of the species has declined during the 20th century and is perhaps still declining. In comparison, common goldeneye are found throughout most of Quebec and eastern Canada. They are believed to number at least 60,000 couples.

A navigator aboard the Coast Guard icebreaker Pierre Radisson contemplated a group of some twenty harp seals lying on the ice floes adjacent to Île Saint-Louis in the Saguenay Fjord. They can be identified most notably by the black saddle on their creamy-white back. “We observed them aboard our rescue boat during an exercise at sea; they didn’t seem the least bit bothered by our presence!”, he explained. Farther downstream, an ornithologist standing at Point de l’Islet at the mouth of the Fjord observed a lone harbour seal last week.