Observations by the Ton 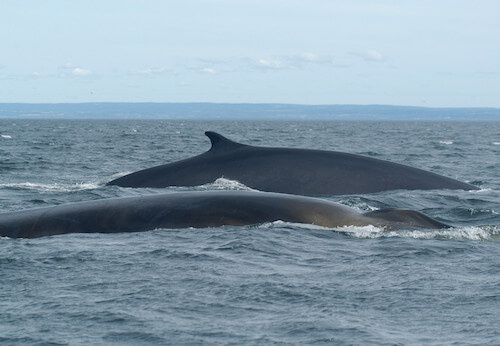 Observers at sea and on land are excited, and for good reason! The St. Lawrence River is teeming with life, whales are present throughout the St. Lawrence and the diversity of marine mammals is remarkable on this first official day of summer!

In the Saguenay-St. Lawrence Marine Park region, the area between Tadoussac and Les Bergeronnes is swarming with belugas. Captains must play it safe and lower their speeds in this vast sector. Saturday, June 18 was a memorable day for an experienced naturalist in the Tadoussac region who reported having observed a group of seven scattered fin whales amongst which was a single humpback whale. These whales were all swimming dynamically under a blazing sun! Gray and harp seals have been repeatedly observed among the groups of whales that come and go between Tadoussac and Les Escoumins.

Minke whales are also being spotted, with one minke recently providing thrills for whale-watchers on a cruise in the Rivière-du-Loup region, thrusting itself out of the water 45 times! Also on the south shore, a kayaker reported the presence of belugas hugging the coastline near the municipality of Cacouna.

Farther downstream, there’s also plenty of action associated with the recent capelin spawning. In Cap-Chat and Sainte-Anne-des-Monts, minke whales were reported surface feeding near the shore near the Exploramer museum and along Cartier beach. Adding to the excitement was a group of five fin whales that paraded along the coast on June 17.

In the Gaspé, there were reports of an impressive gam of large rorquals between Cap d’Espoir and Île Bonaventure. “There were between 12 and 15 individuals hunting their prey at high speed. We nickname them the ‘greyhounds of the seas’. Mixed in among them were a half dozen minke whales and two young humpbacks, one of which is the calf of the old Splish, born in 2015,” reported a frequent collaborator.

Lastly, our observer in Franquelin was eager to share her observation-rich week. Every day, minke whales and harbour porpoises would show up right in her backyard. And what a joy to have observed the first fin whales of the season in this region. Two individuals were seen on June 17 and 19 this year, never more than 1 km from the coast.

The St. Lawrence is one of the premier places in the world to observe a great diversity of marine mammals close to shore. The Saguenay-St. Lawrence Marine Park also marked the opening of its land-based observation sites on June 18.