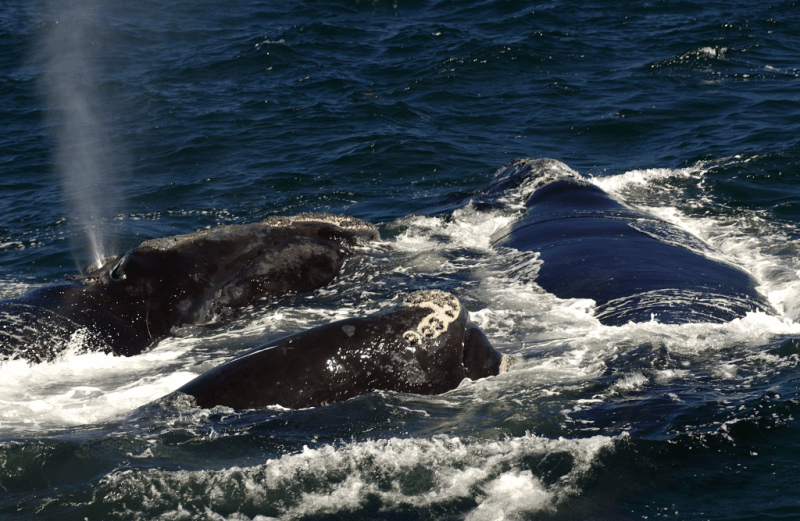 Thanks to a new statistical model, US government researchers and the New England Aquarium are able to more accurately estimate the North Atlantic right whale population and more quickly detect growth or declines. Their results are alarming: this population, which numbers less than 500 individuals, has been declining since 2010 and the proportion of females is also on the downswing.

How is a population estimated?

Despite whales’ imposing size, estimating their populations is not so straightforward. Whales often spend a great deal of time under water, out of sight in the immensity of the ocean. Right whales in particular are highly mobile and scattered over a vast area, from Florida to the Gulf of St. Lawrence and beyond, sometimes as far as northern Norway. Amongst their favourite “stomping grounds”, nowhere can one find all the right whales at the same time. However, their seasonal and regular use of well-known habitats in coastal waters (along Florida and Georgia in winter and in the Gulf of Maine year-round) has enabled researchers to create an almost complete photo catalogue of the population. Every year for over 30 years, researchers have been observing right whales, identifying them individually and monitoring the evolution of this small population.

To estimate the population, two methods have been used up until now. The first consists of calculating the minimum number of living individuals. An individual is calculated as living if it was observed that year or if it was observed in a previous year and a subsequent year. For example, a whale seen in 2011 and 2013 will be counted as living for the year 2012. This estimate is usually lower than the actual population – particularly for the most recent years – since it does not include living animals that have not yet been catalogued and animals that are still alive but have not been observed in recent years.

A second method is used every year by the North Atlantic Right Whale Consortium and differs from the previous method in that a catalogued whale is assumed to be alive until it is found dead or for up to six years after the most recent observation. This approach may therefore fail to detect a true population decline.

Need for a new method

In recent years, right whales appear to have altered their summer and winter grounds, and fewer resources have been allocated to photo-identification. As a result, the probability of finding and identifying each and every living whale is reduced, as is the reliability of previous estimation methods based primarily on censuses.

Has the population actually declined in recent years or have researchers simply been unable to observe a large proportion of living whales? To answer this question, researchers developed a statistical model to estimate the population. Compared to previous methods, this model is less affected by changes in the whales’ distribution, less dependent on the frequency of observations, and takes better account of individuals that are still living but rarely observed.

Following an average annual growth of 2.8% between 1990 and 2010 (from approximately 270 to 483 individuals), the population then fell to about 458 individuals in 2015, with the decline being particularly pronounced in adult females. The new model leaves no doubt: the probability that this population has been falling since 2010 is 99.99%.

Despite the constraints of recent years – both biological (changes in the geographic distribution of whales) and logistical (fewer resources available for photo-identification) – it is possible, thanks to this new statistical model as well as data collected over the past three decades, to detect this relatively recent decline in the trajectory of this population. To protect such a small population, it is essential to be able to quickly detect any increase or decrease in its size.