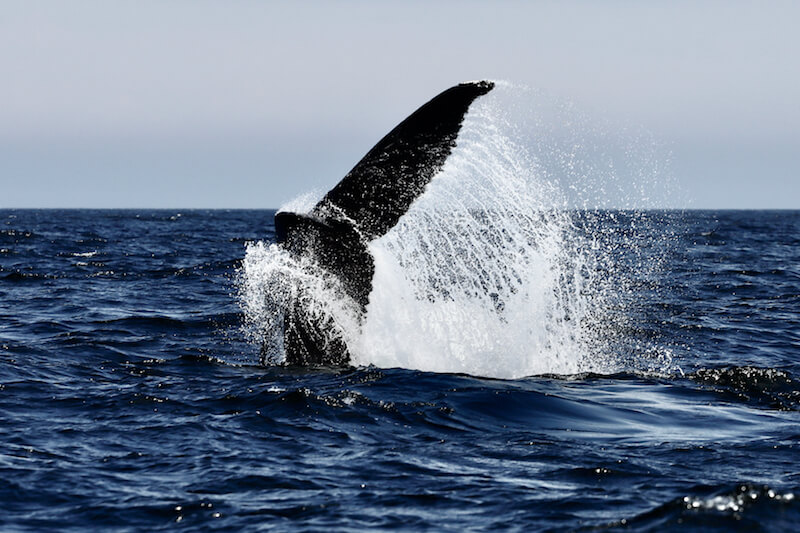 Migration is truly underway in the Gulf of St. Lawrence and is in full swing at the tip of the Gaspé. Humpbacks and fin whales have been plentiful, but blue whales seem to be dragging their caudal fins.

I have just returned from a five-day visit to Gaspésie with the objective of photo-ID’ing as many individuals as possible, and during which I was limited to about twenty hours on the water. The weather was not favourable, with strong winds and periodic rain.

My season began with four trips to the gateway to the Estuary between May 6 and June 6, and failed to produce a single large rorqual. This is an exceptional situation compared to all seasons past, when I normally see a few blues and fins in this area.

On June 15, I therefore decided to go patrol the tip of the Gaspé, since it is always around this time of year that the annual migration of large rorquals takes place. The end of this peninsula is a mandatory passageway for whales heading toward the Estuary and the northwestern reaches of the Gulf.

The abundance of capelin during this period attracts humpbacks and fin whales near the coast. The brownish colour observed when they defecate leaves no doubt that they have been feasting on fish of late. Rather reddish feces would indicate a more krill-oriented diet, but that’s not what I’ve been seeing.

In general, I notice that the populations of these two species of whales are increasingly composed of young, rather small, and unidentified animals. As a result, these individuals are much more playful. We have also been encountering more and more mothers with calf in tow. This is a trend I have been observing for the past 3 years, but it became even more obvious to me on this most recent outing. There appears to be considerable population turnover and a better fertility rate, particularly for humpbacks. 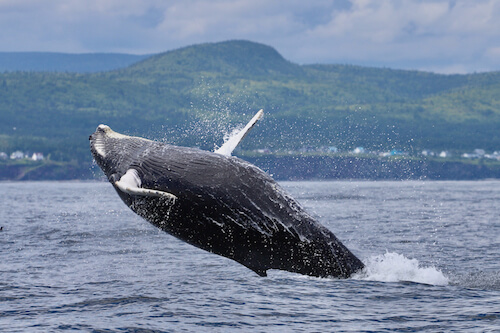 Humpback whales are quite exuberant these days! © René Roy 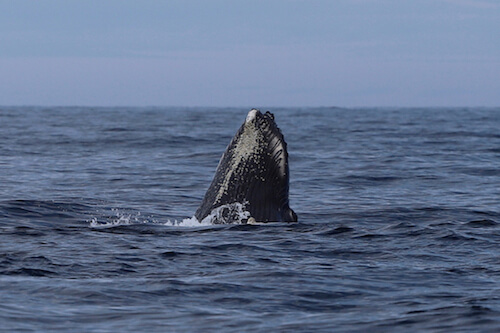 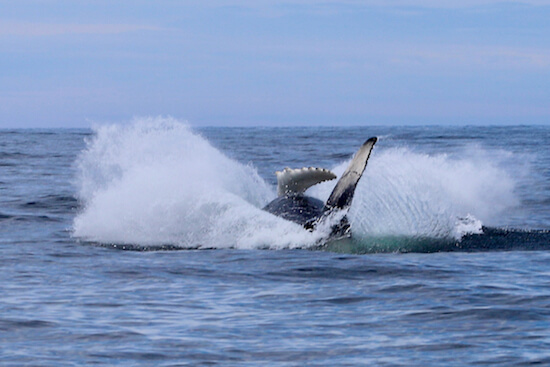 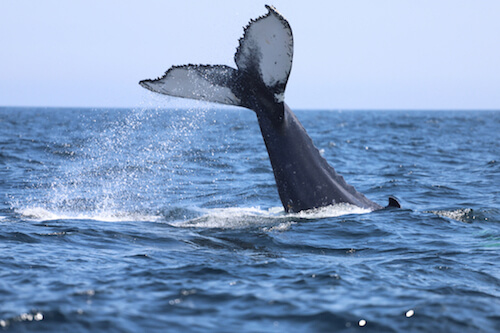 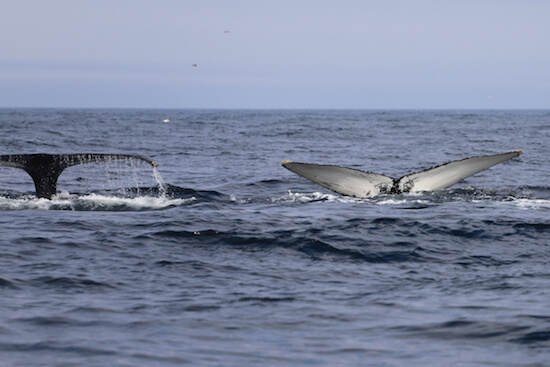 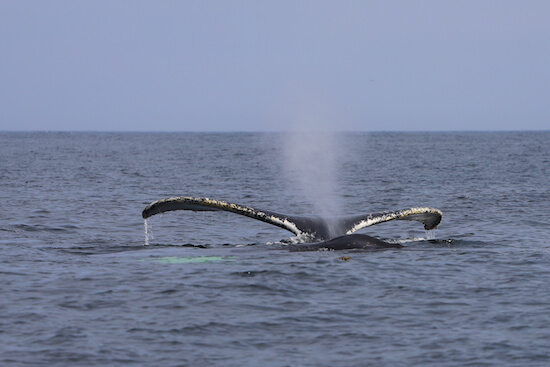 However, we cannot always determine if it is a mother-calf pair. © René Roy

I was therefore able to document about twenty humpbacks but only seven fin whales, despite the fact that the latter are much more abundant. Fin whales are more difficult to monitor given their speed and the difficulty of photographing their chevron, especially when the seas are rough. 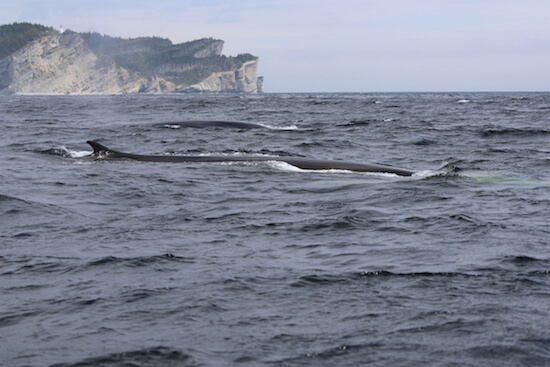 Fin whales near the tip of the Gaspé © René Roy

The most recent excursion at sea provided encounters with a few “Famous Ladies” or “Old Ladies”, as scientists call them, including corpulent old female humpbacks such as Bolt (H102), Fleuret (H009) and Irisept (H492). I am always quite happy to see them. They seemed enormous to me compared to the other migrating cetaceans. 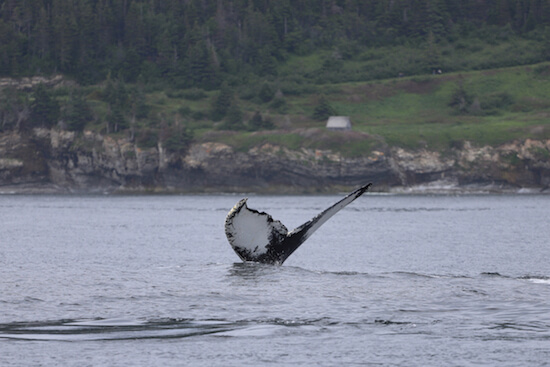 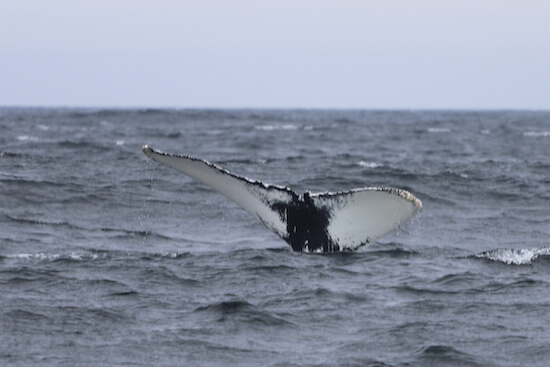 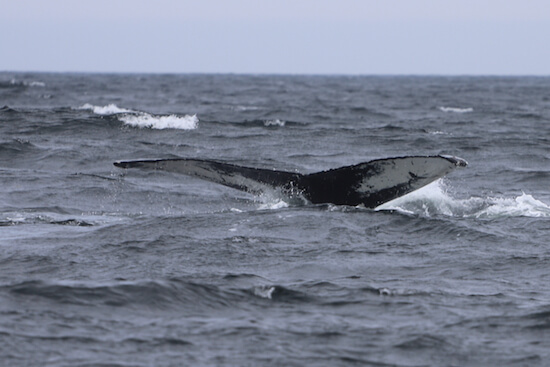 I also got to see H878, which is the calf born to Tracks (H109) in 2017. I had already observed her on July 1, 2018, when she was still a newborn. This year, this young female showed a large scar from an injury inflicted by a boat propeller. Seemingly in good health, she is now 4 years old and may therefore have reached sexual maturity. 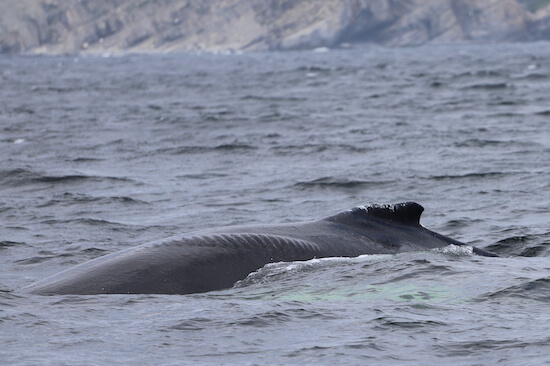 Blue whales are still conspicuously absent, possibly due to unfavourable currents for the krill on which they feed exclusively. We expect that they will be back very soon. Unlike other large rorquals, blue whales are more solitary and do not like to share their feeding grounds.

Until next time… hopefully very soon!

(All photos presented in these “Field Notes” were taken as part of a photo-identification mission under permit number QUE-LEP-004-2021.)