Marine mammals on the ice and humpbacks in the Caribbean 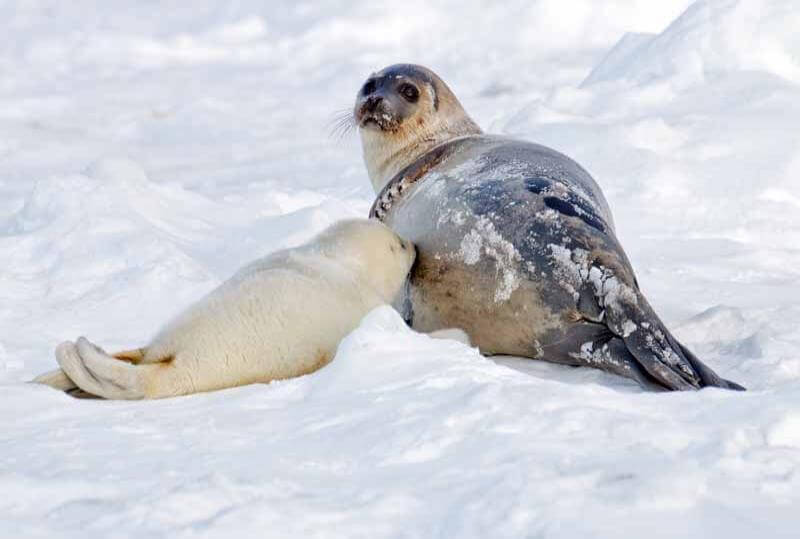 Off the Gaspé Peninsula town of Newport, 50 or so seals bask on the ice. To observe them, it’s best to have binoculars, as they are 4 or 5 km away. “I’d say they’re probably harp seals, but I’m not sure because of the distance,” says the observer. He also notes the presence of a few grey seals here and there since the beginning of the month.

The scientific name for the harp seal is Pagophilus groenlandicus, the first part of which translates as “ice-loving” in Latin. It is therefore not unusual to observe them on the ice floes.

Surprisingly, young harp seals nicknamed “whitecoats” are born without an insulating layer of fat. Their fur keeps them warm until they are 10 or 15 days old, by which time they are fattened up and weaned. At that point, the little ones are able to swim and are ready to feed on their own.

On ice hugging the shoreline, other mammals have been observed in recent days, both in the Bas-Saint-Laurent and Côte-Nord regions: coyotes and fox. But these mammals cannot be considered “marine” mammals. A number of definitions exist for marine mammals, but they can be summarized as follows: mammals adapted to aquatic life that depend on the marine environment to live. This is why polar bears are also considered marine mammals: good swimmers, polar bears split their time between water and the pack ice. The harp seal is also a marine mammal, though it spends more time on the ice than it does in the water.

News from down South

We also have some news regarding humpback whales from the Caribbean. In Guadeloupe, female-newborn humpback duos have been observed since early February. The Center for Coastal Studies in Provincetown, Rhode Island, received news from a transmitter placed on the back of the humpback named Bounce. This female received her tag in the fall of 2018 while feeding in the Gulf of Maine. She embarked on her migration on January 9. On January 25, researchers obtained a satellite position for her off the coast of the Dominican Republic, which corresponds to the species’ breeding grounds. In February, the tag transmitted positions from the vicinity of Samana Bay and Silver Bank. Also in Samana Bay, DogEar, a known humpback whale from the Gulf of St. Lawrence, was observed during the winter of 2018. Since February 11, researchers have not received any more positions from Bounce. Did the tag fall off during the whale’s mating activities? Or did it simply stop working? In any case, for the first time, thanks to the exceptional lifespan of the transmitter, data were collected from a humpback for the complete duration of its migration, from the Gulf of Maine to the Caribbean!