Little Hitchhikers on Big Travellers and a Horde of Dolphins 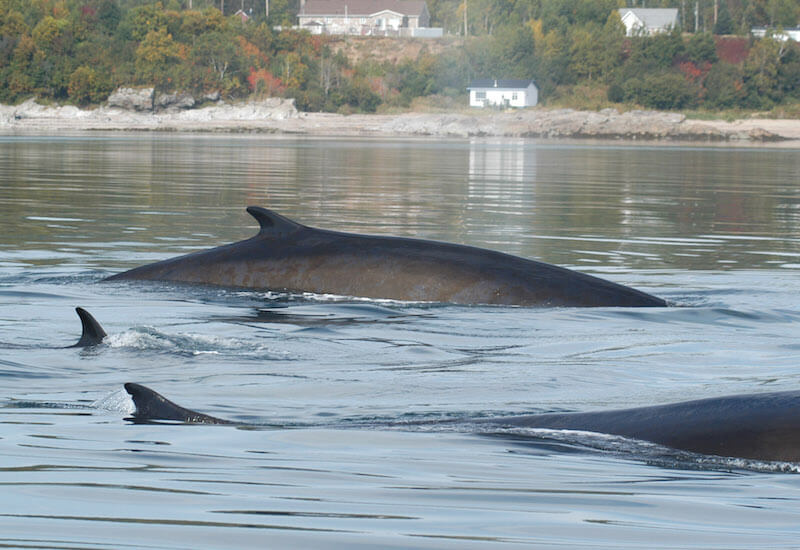 Whales lose and acquire new accumulations of diatoms over the course of their migration, as different species of algae live in warm, cold or temperate waters. © GREMM

Large golden-brown spots can be seen when a fin whale appears – for example, one of the eight individuals observed on October 22 by Jacques Gélineau, collaborator for the Nordic Institute for Environmental and Occupational Health Research (INREST) in Sept-Îles. They are colonies of diatoms. Each of these microscopic algae is composed of a single cell lined with a double shell of silica, a sort of “glass cage”, which explains why these colonies glimmer in the sun. They are also noted on the skin of the blue whale pair encountered this week in Sept-Îles

Also in Sept-Îles, the tips of the tails of two humpbacks are covered with small organisms. Barnacles are crustaceans that have a rather peculiar life cycle: in their final larval stage, they attach themselves to a surface such as a whale, pier or rock. Once attached, they secrete their shell made of calcium plates and metamorphose into an adult. To feed, they extend six pairs of feathery appendages out from their shell that sift the water to capture floating plankton. Like diatoms, there are different species associated with warm, cold and temperate waters. Barnacles cling to slow-moving whales such as humpbacks and right whales. A week earlier, another humpback noted in Sept-Îles sported a different “free-rider”: a goose barnacle, a marine crustacean that attaches itself by its peduncle.

Small crustaceans nicknamed “sea lice” (article in French) and lamprey (which are fish), also parasitize whales. Lice infest in particular those parts of the body that are protected from the turbulence of the water: eyes, lips, genital slits, ventral grooves, etc. Incapable of swimming, they are transmitted from one individual to another by direct contact. Lice feed on the whales’ skin. Lampreys, with their sharp teeth and their suction cup-like mouth, grind the skin of their host to extract blood and other bodily fluids. However, it is believed that they do not cause significant injury to whales. The latter are thought to breach in order to dislodge any lamprey that might be attached. Was that the goal of this minke whale seen hurling itself through the air in Franquelin on October 22, or of one of the three humpbacks seen leaping out of the water at L’Anse-Saint-Georges in the Gaspé on October 23? Maybe, but there are several hypotheses that attempt to explain these breaches. In addition, with the moult or renewal of cells, whales might be able to rid themselves of these organisms.

Lastly, in addition to the large rorquals, one minke whale and eight harbour porpoises noted in Sept-Îles, a hundred or so white-sided dolphins are also spotted! With the animals passing by so rapidly, the waters appear turbulent. This gives hope to cruise operators in the Marine Park that they might be able to end their season with a dolphin sighting if they extend their journey to the mouth of the Saguenay. A year earlier, a hundred white-sided dolphins were swimming off the shores of Tadoussac (article in French). For the moment, captains and naturalists cross paths with two blue whales, a humpback and a fin whale off Les Bergeronnes, as well as porpoises, belugas and minke whales off Tadoussac.