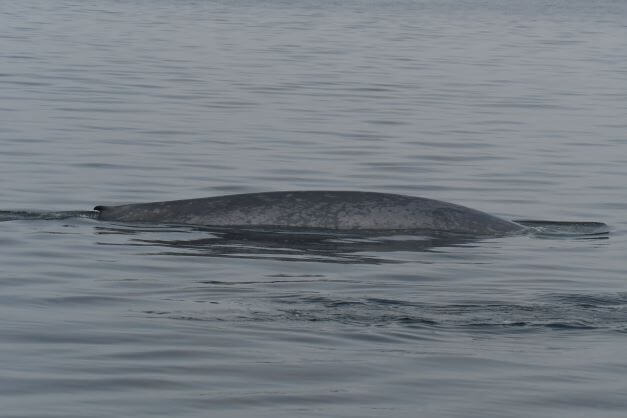 This week, we were able to admire the milky blue of a mist-laden sky, the dark bluish-black waters of the St. Lawrence, but above all, the characteristic mottled blue-grey of the giants: blue whales! Their name seems to be on the tip of everyone’s tongue since they first appeared in the Gulf and then in the Estuary.

Blue from Tadoussac to Gaspé

Blue whale observations in the Estuary have been coming in for about ten days now. Sometimes one, sometimes two, sometimes three… Blue whales were notably spotted opposite the Marine Environment Discovery Centre in Les Escoumins as well as from the ferry that runs between Les Escoumins and Trois-Pistoles. But until recently, no one had been able to send us any photos. That all changed on Wednesday morning, thanks to one of our research assistants on board a whale-watching cruise! The two giants emerged side by side, very close to the boat, while the latter was travelling between Tadoussac and Les Bergeronnes. It’s rare to find them so far up the Estuary, and rarer still to observe them at such close range. Our collaborator was able to seize the opportunity to provide photos that might help us identify these individuals.

Off the coast of Sept-Îles, official counts vary depending on the day, the observers and the area covered. Last Friday, one trip list revealed 3 blue whales, 10 fin whales and 3 humpbacks. On Saturday, a mariner identified a dozen or so blue whales (!), five humpbacks and at least fifteen fins… not to mention many minke whales and numerous large grey seals. Whatever the tally, it’s safe to say that these waters are teeming with life! 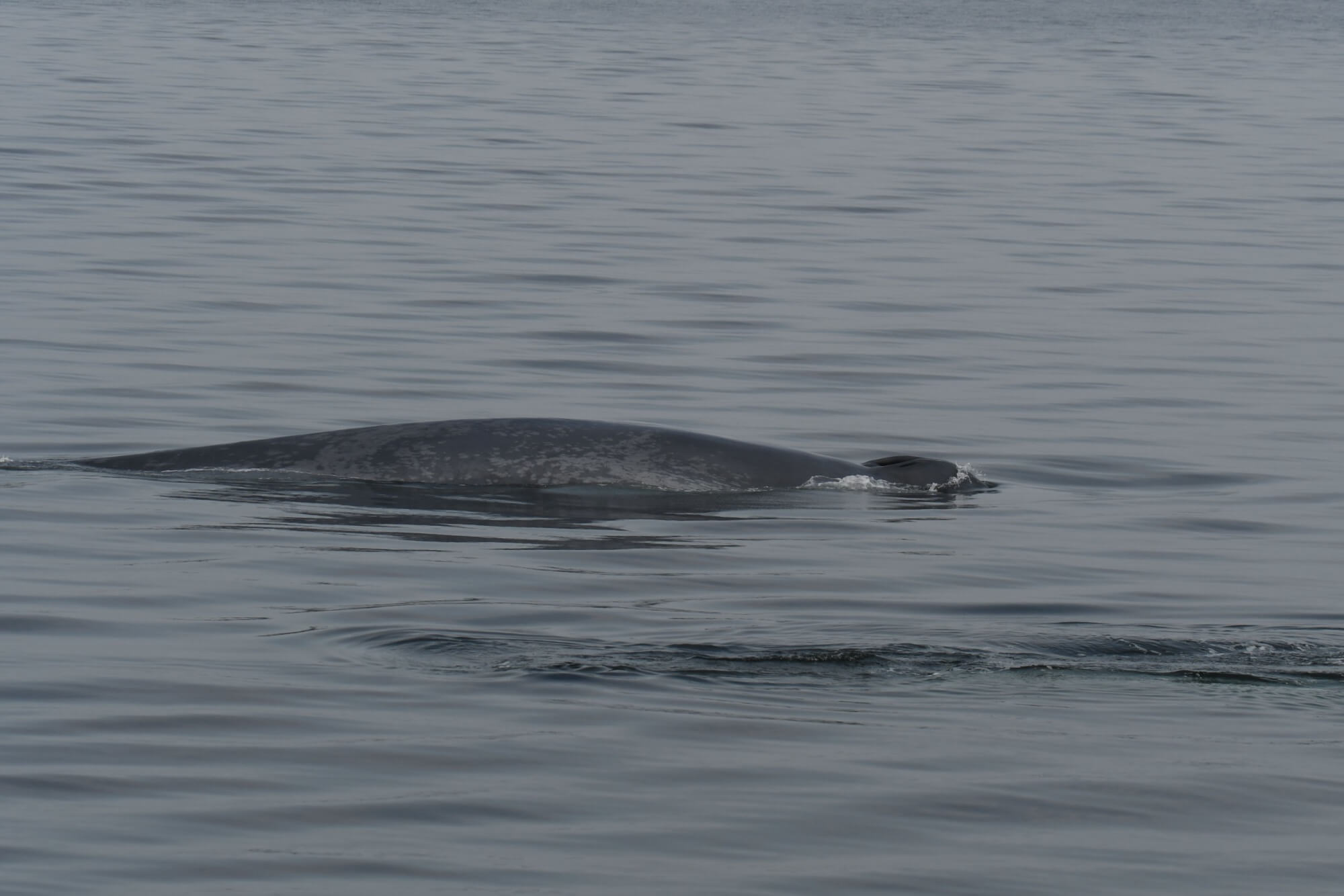 A blue whale and the "step" of a second giant at its side. © GREMM

Farther downstream, in the Mingan Archipelago, another report comes in of an encounter with… another blue whale! “It seemed to be moving west,” points out an employee from the Mingan Island Cetacean Study (MICS). It maintained a steady course and speed for the duration of our observation.” In the same sector, i.e. east of Anticosti Island, researchers encountered en route “many fin whales, multiple humpbacks including one individual that breached about ten times, throngs of porpoises, minke whales and a school of jumping tuna!” The team also observed a North Atlantic right whale off the coast of Havre-Saint-Pierre. This species is closely monitored because of how rare it is and how precarious its population is.

Near Cap Gaspé, humpback whales entertain cruise passengers, who have been able to witness gatherings of up to eight individuals at a time. Fin whales are becoming rare, but the huge column-shaped spout of a blue whale was seen on Monday the 23rd.

A photographer and pleasure boater from Percé shares her experience after a trip out to sea on August 19. “Conditions that day were perfect for long-distance sailing. We left Percé and were about a kilometre from Cap Gaspé when we started observing humpbacks. I was able to photograph 6 of them, 5 of which were different individuals from my outing on August 1 at the same location.” But she is quick to point out the absence of cetaceans in the Percé area. “In 68 hours on the water since July 10, I saw whales just once in Percé. A few animals are probably present, but it seems to me they are less plentiful than in years past. What might be the causes of this scarcity? Perhaps they will arrive later in the year?” 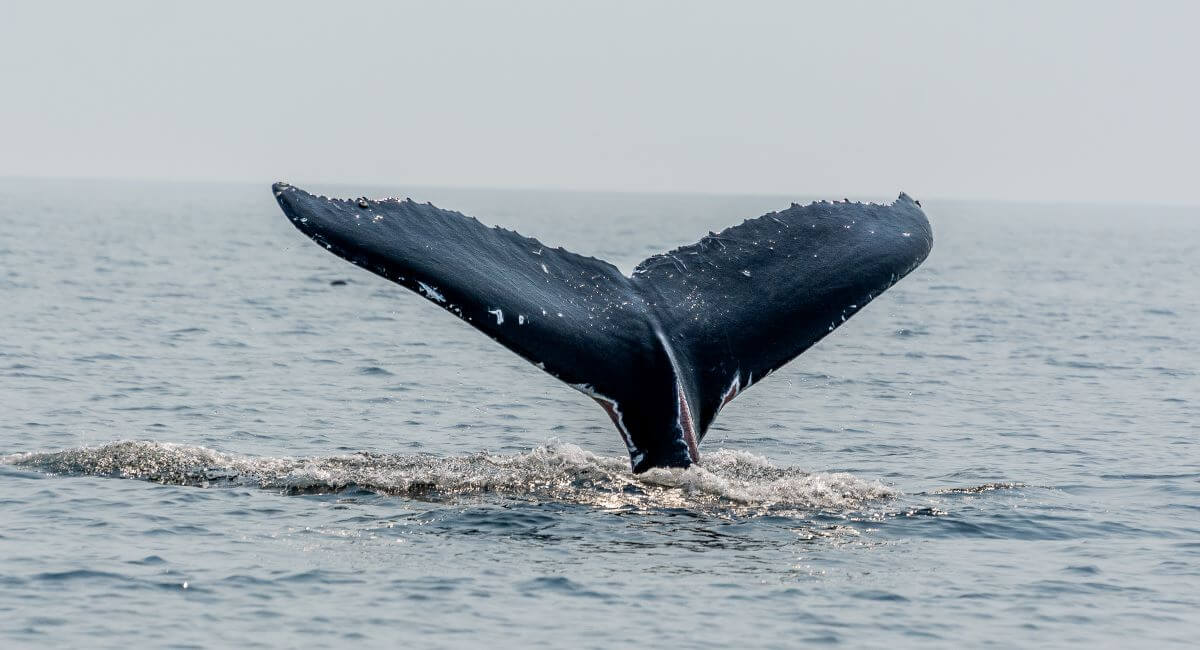 MICS employee René Roy, who crisscrosses the River at the mouth of the Estuary between Matane, Baie-Trinité and Baie-Comeau, wonders the same thing. “I ran into a few humpbacks here and there, a couple of fin whales, but ultimately very few large rorquals and not a single blue. In 20 years of boating in the area, this is the first time I’ve gone without seeing any. I’d really like to know what’s happening and what’s driving the changes in the distribution of the animals in the St. Lawrence!” 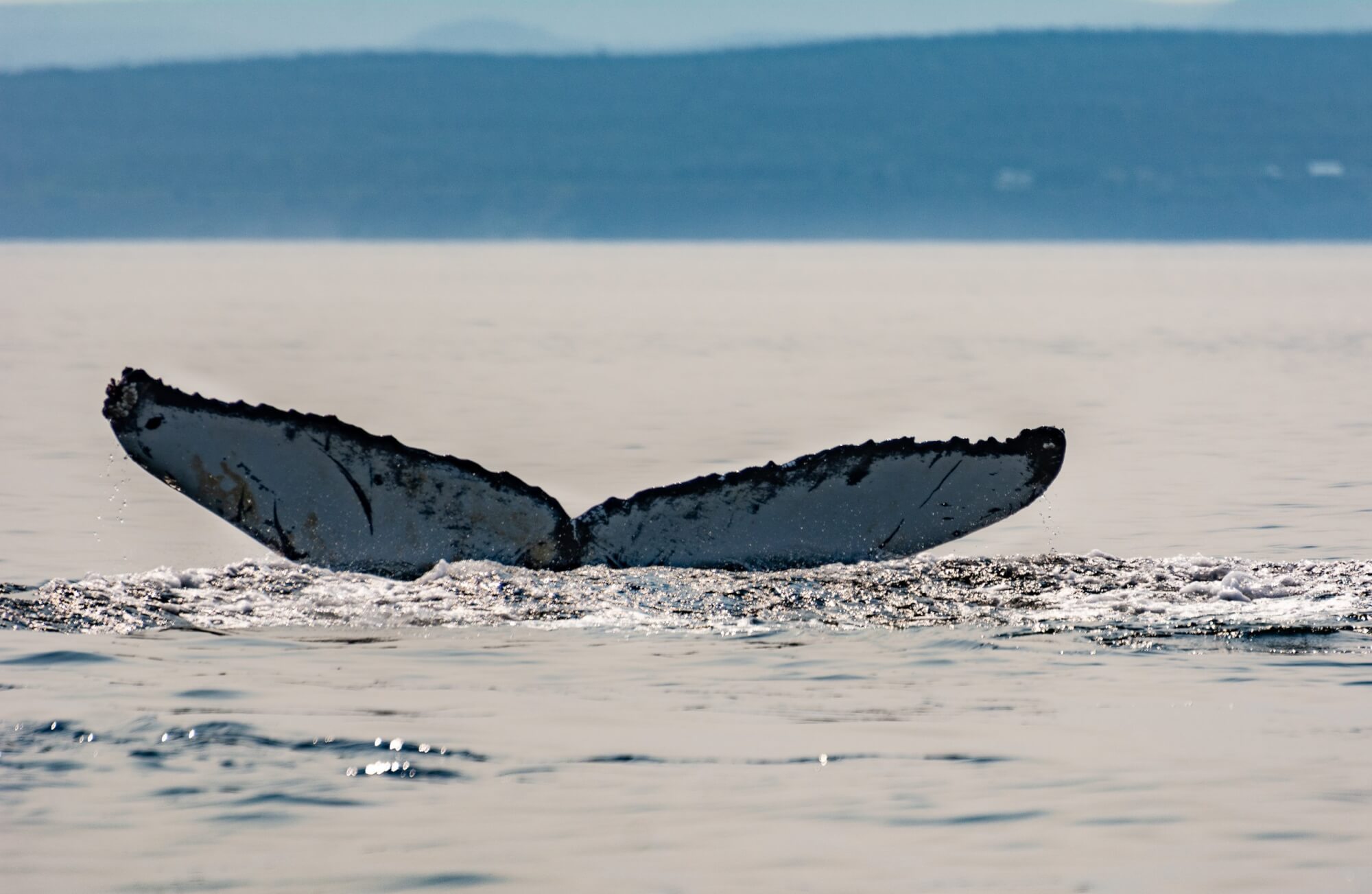 Humpback whale off the cap of Gaspé © Guylaine Marchand

Fortunately, those who wait are sometimes rewarded with pleasant surprises. A resident of Cloridorme, disappointed after having observed next to nothing for two months, finally made several sightings the same day she sent me her message: a dolphin, several seals, minke whales… and a fin whale opposite Baie de Saint-Yvon!

The magical spectacle of biodiversity

Perhaps the most fascinating thing about the St. Lawrence is the incredible diversity of species that live side by side. On an outing in the Saguenay-St. Lawrence Marine Park, one might cross paths with huge herds of belugas moving with the tides, droves of speedy little harbour porpoises, minke whales and large rorquals by the dozen, or even a narwhal! The narwhal has been spotted several times in recent weeks together with a large group of belugas. On August 19, he was spotted with “his gang” near the Baie Sainte-Catherine ferry, heading up the Saguenay toward Baie Sainte-Marguerite.

Of course, it is often humpbacks – which are particularly abundant this year – that take centre stage. “Last Friday, two humpbacks were seen breaching off Franquelin. We also had good numbers of minke whales and harbour porpoises,” says an observer in Baie-Comeau. Land-based observations are both numerous and spectacular in Les Bergeronnes. On Saturday, a trio of humpbacks (Cédille, her calf and a third individual) launched into a ballet of caudal and pectoral fins a few hundred metres from shore. The day before, visitors based in Essipit were also treated to a show. “Around 7:30 in the morning, 2 fin whales and 5 minke whales were patrolling in front of our condos about 150 metres from shore and numerous belugas were swimming farther offshore when all of a sudden, 3 humpbacks – 2 adults and a calf – appeared in the bay about 60 metres from shore. One of them made 3 quick dives and to our surprise, when it reappeared, it performed a sort of breach with a twist and then repeated this stunt 2 more times. They lingered in the area until late afternoon, after which we lost sight of them.” 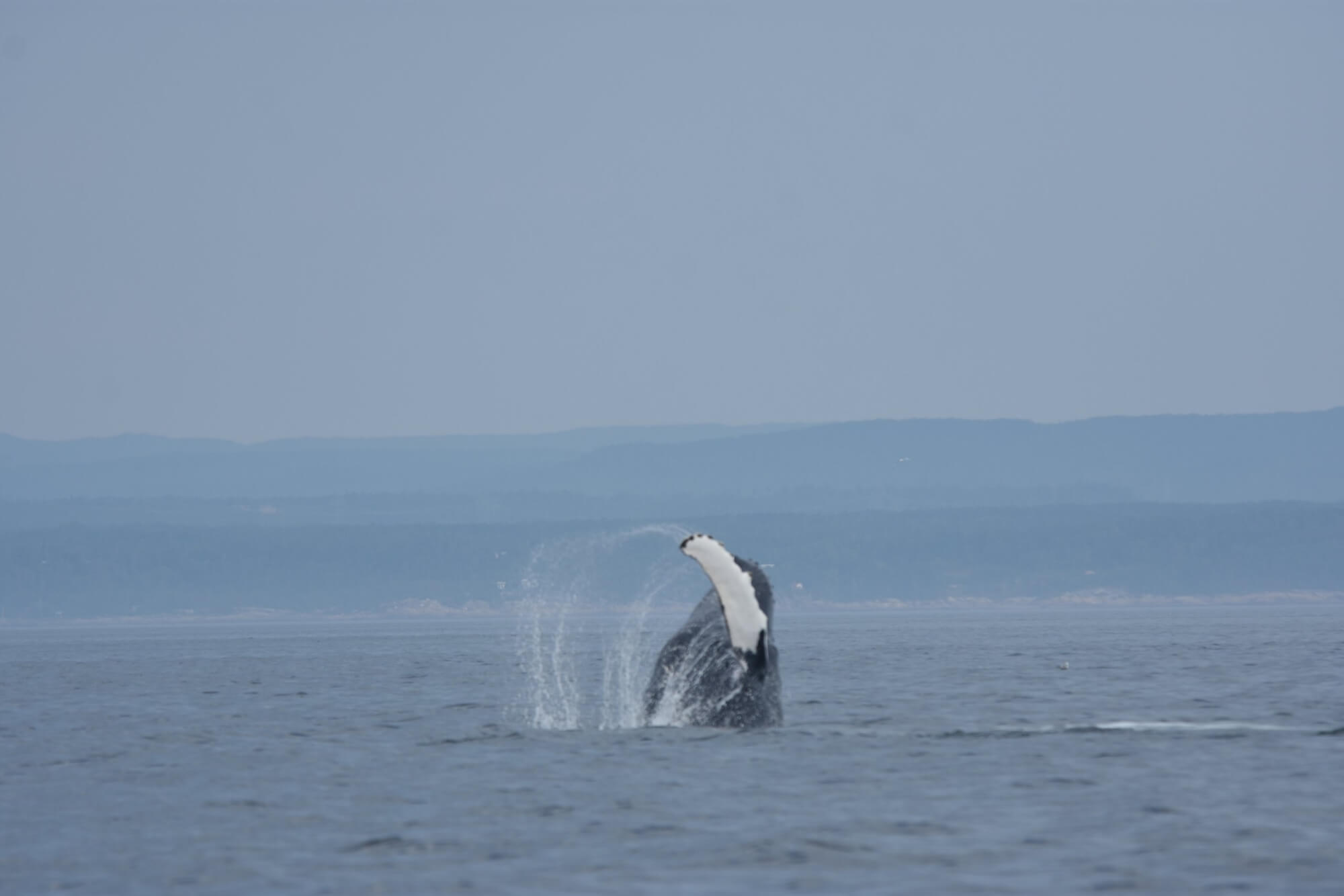 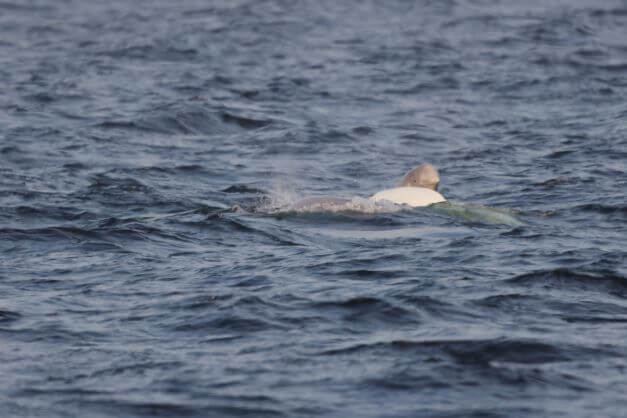 For technical reasons, we were unable to produce the sightings map this week. We apologize to our devoted readers, but we promise that it will be back next week!