Whales in the Storm 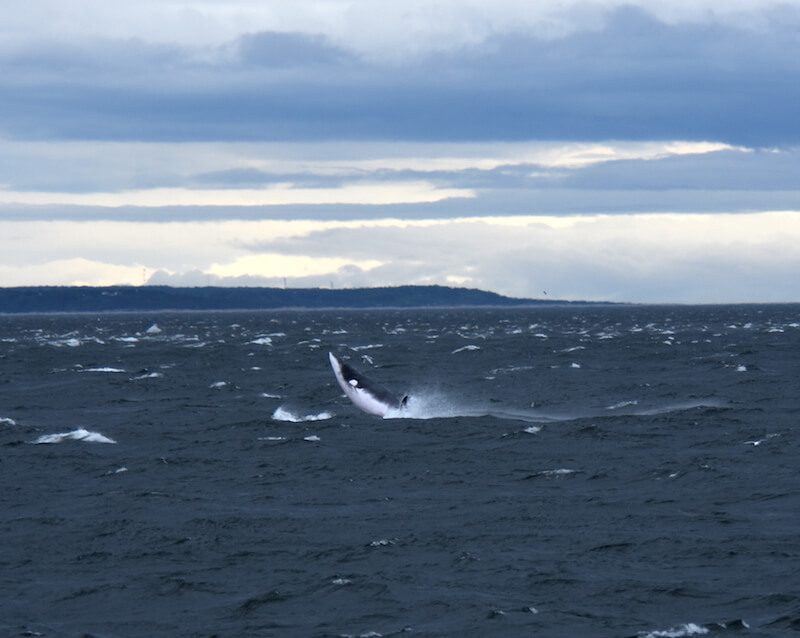 The sighting map appears a little sparse this week. Have all the whales left? Not necessarily. Weather conditions prevented many boats from setting sail, including those of the Mingan Island Cetacean Study. Strong winds grounded surveillance aircraft operated by Fisheries and Oceans Canada and Transport Canada. Huge waves, pounding rain, and howling winds also kept even the most hardcore observers on shore. For some, it represented an opportunity to return to their winter quarters. But how did the whales weather the storm?

Regardless of whether it is windy or raining, whales must come to the surface to breathe. In the span of about one second, they expel the air from their lungs and replenish them through their blowhole(s). Some species have two, others just one. The muscles of the blowhole are strong and connected to fibrous plugs that prevent water from entering when the animals are not breathing. Whales voluntarily contract these muscles to open the blowhole and exhale when they arrive at the surface. Regardless of how turbulent the water is, whales should be able to breathe without water entering into their respiratory system. And, when the waves are rough, they seem to lift their bodies out of the water more, which probably allows them to raise their blowhole above the chop to breathe.

Occasionally, a powerful storm might disorient a whale and cause navigational errors. Gusts can also change the trajectory of prey, and consequently, the distribution of whales in the days that follow.

Some areas such as the Estuary were not affected by the storm. Is that why we find so many individuals here? Observers were delighted to see twenty or so humpback whales and about fifteen fin whales. From the docks in Les Escoumins, a whale enthusiast spots a couple of blue whales swimming in tandem. “Two of them even showed their tails when they dove,” she exclaims, watching them through her binoculars.

She also notes the presence of grey seals, mother-calf pairs of harbour porpoises, and minke whales.

From Portneuf-sur-Mer, the Mériscope team takes a trip out to sea on September 10. “There are still a lot of young minke whales. They are autonomous of their mothers, as they should be this time of the year, but some of this year’s youngsters are sticking rather close to adults. It’s interesting to observe,” says researcher Dany Zbinden.

Surprise in Saint-Fulgence! For the second time this summer, two belugas are seen swimming opposite the neighbouring village of Chicoutimi. Usually, belugas do not venture up the Saguenay any farther than Baie Sainte-Marguerite. 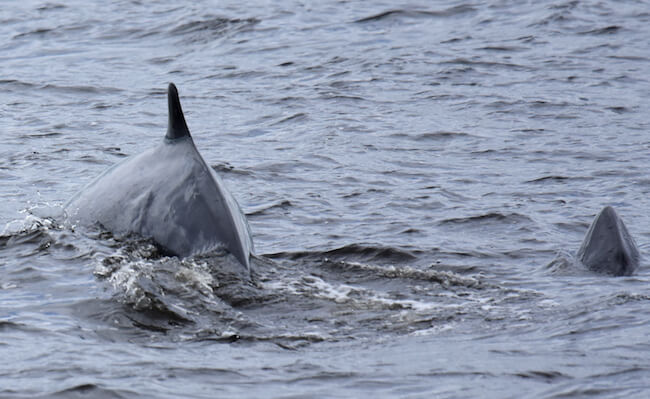 A minke whale swims with a calf. © Renaud Pintiaux (archives)

“Where are all the blue whales?” asks Richard Sears, an expert in this species and founder of the Mingan Island Cetacean Study. The previous two weeks, he had seen a large number of blue whales along the Gaspé Peninsula, but they seem to have left the area. At least one is observed near Cap Gaspé on August 9. The following day, the captain of a whale-watching cruise spots a dozen or so large spouts while out at sea. The strong waves prevent him from going too far offshore in his search for whales, but he nevertheless sees two minke whales, one humpback, one fin whale and even an Atlantic bluefin tuna leaping out of the water!

In Bonaventure Island, the gusts of Hurricane Dorian have dealt a blow to the island’s northern gannet colony. One naturalist notes the loss of some chicks, which will certainly not help the species’ already paltry breeding success this year. Researchers from the Université du Québec à Rimouski found that only 25% of gannet chicks successfully fledged. Unable to find nutrient-rich mackerel, gannets have resorted to eating sand lance, which might provide less energy. Sand lance are also consumed by several species of whales. On August 10, one observer notes two fin whales, a blue whale and a harbour porpoise near the island.