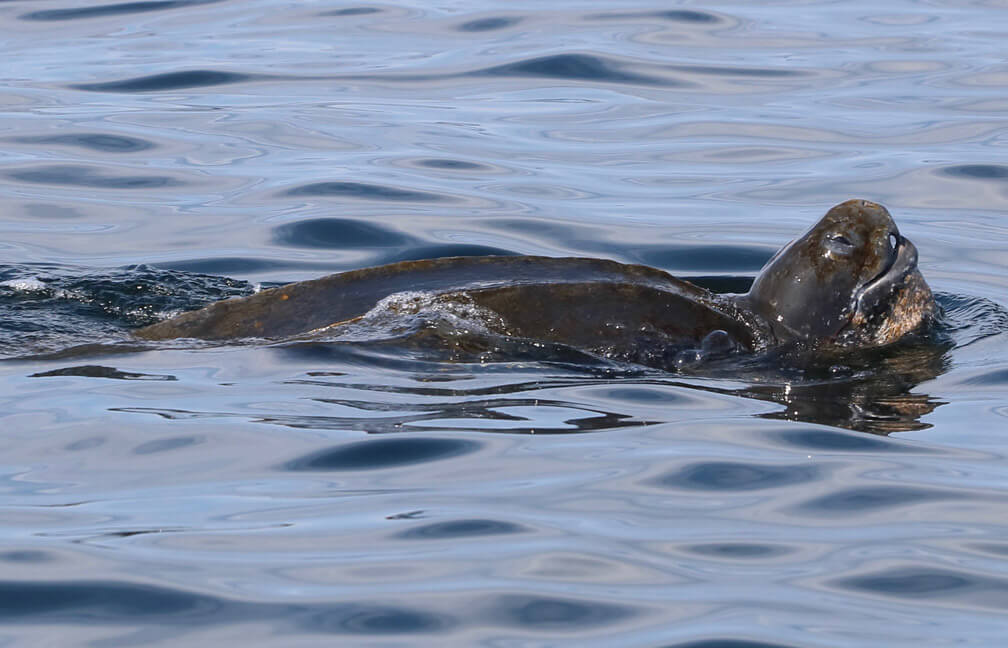 Leatherback turtles are well adapted to the cold waters of the St. Lawrence. © René Roy

In late April, a local resident discovers a very decomposed carcass on Haldimand Beach in Gaspé. All that remains are the bones and pieces of thick, leathery skin. Several experts examine the photos sent in by the witness before ultimately determining that it is the carcass of a leatherback turtle. 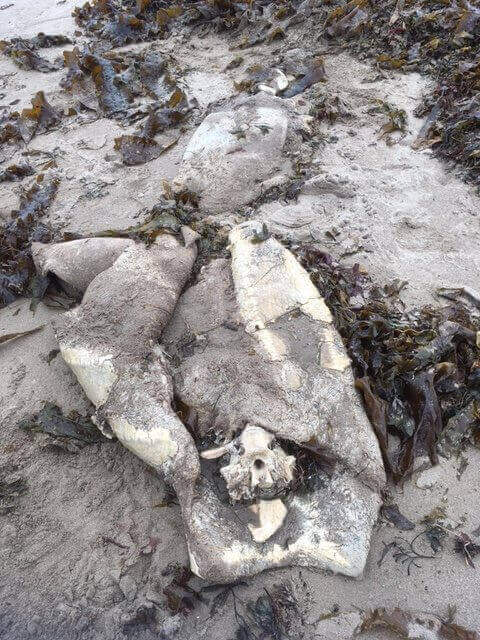 Some carcasses are particularly difficult to identify due to their state of decomposition. © Francine Henry 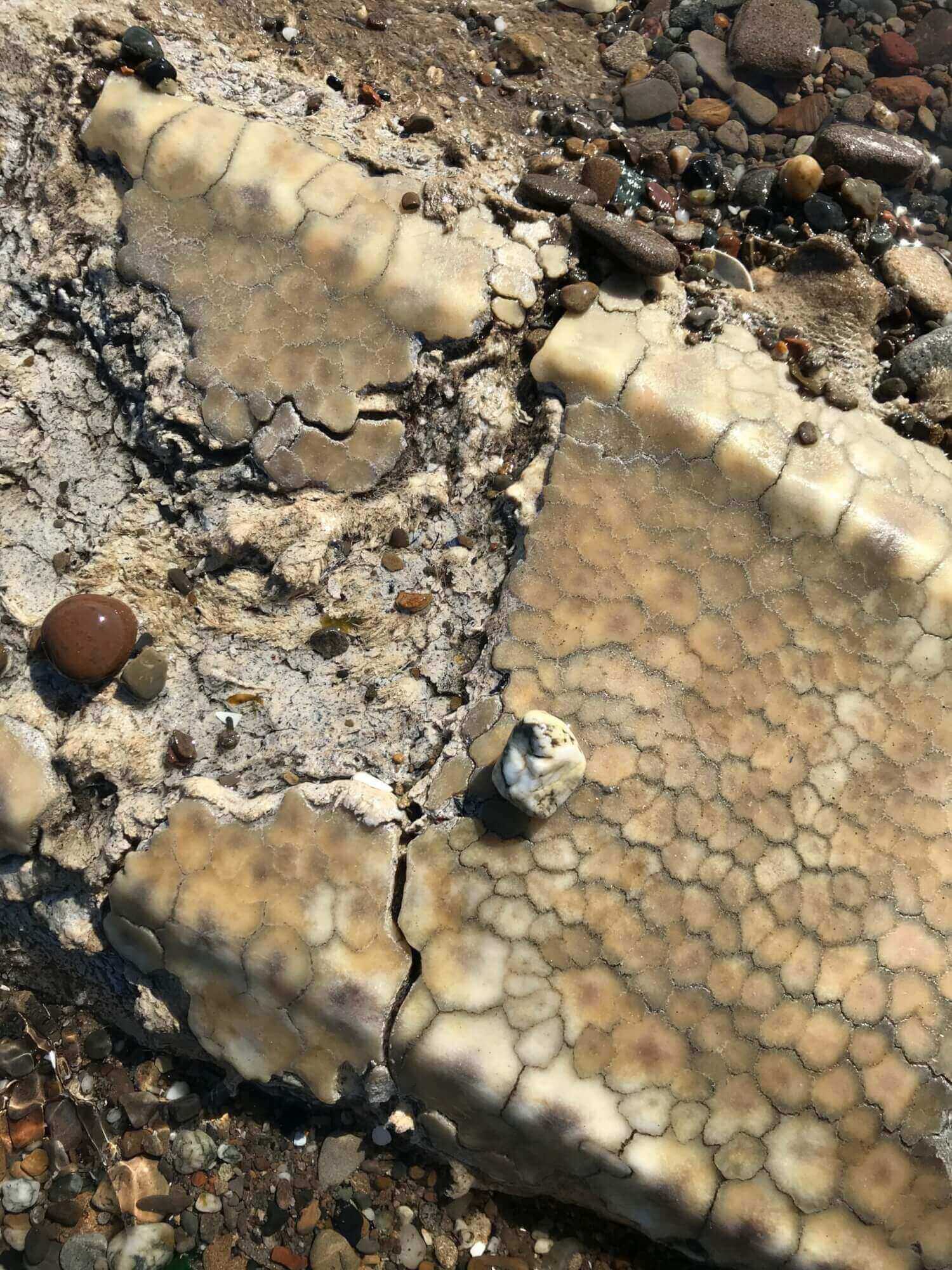 The characteristic pattern of the leatherback turtle shell allowed us to recognize the species. © Rachel Arseneau

Indeed, when the call centre of the Quebec Marine Mammal Emergency Response Network (QMMERN) receives the images, it initially thinks it is dealing with a cetacean carcass, but the advanced state of decomposition makes identifying the species complicated. A Network employee recognizes certain details in the carcass that remind him of the back of a leatherback turtle. This sea turtle is the only one to have an armoured back rather than a shell made of scales. The Network then forwards the photos to its partner organization Amphibia-Nature, which specializes in reptiles and amphibians. The organization’s veterinarian confirms that the carcass is that of a leatherback turtle, the largest turtle species in the world.

What are leatherbacks doing in the St. Lawrence? 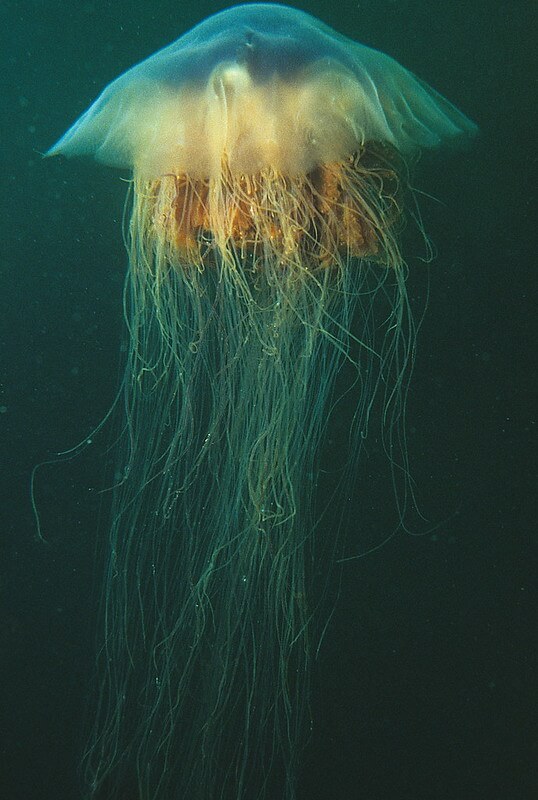 The lion’s mane jellyfish is one of the largest species of jellyfish. © Derek Keats

The mission of the Quebec Marine Mammal Emergency Response Network is to promote the recovery of endangered marine mammal populations by collecting scientific data on whale and seal carcasses or animals in difficulty. Although the leatherback turtle is not a marine mammal, the Network nevertheless collects reports on the species due to its endangered status. The information is then passed on to two Network partners that have an interest in leatherbacks: the research group Amphibia-Nature and Fisheries and Oceans Canada. The latter is responsible for the conservation of this population, which was added to the endangered species list in 2003. Amphibia-Nature collects data on the presence of leatherback turtles in Quebec and Labrador. Share your observations with them and help make a contribution to scientific research!

If you observe an injured leatherback turtle or find a carcass, contact Marine Mammal Emergencies at 1-877-722-5346. The call centre agent will ask you about the location and condition of the animal. One of the Network’s volunteers can then be dispatched to the scene to better document the situation. Data collected by the Network and its partners provide a better understanding of leatherback turtles in the Atlantic and the threats they face.

A turtle with much in common with whales

In the eyes of humans, both whales and sea turtles lead mysterious lives. Indeed, they spend most of their time under water and only come to the surface to breathe, which greatly complicates the work of any scientists who try to study them. In the case of leatherbacks, only females ever venture onto land, and that is to lay their eggs in their breeding grounds in the South. That’s why any sighting of a leatherback turtle is invaluable. If you cross paths with a leatherback, you can report it to Amphibia-Nature by calling 1-877-UneLuth (1-877-863-5884), emailing [email protected] or filling out a form online (in French).

Additionally, leatherback turtles face many of the same challenges as whales. Indeed, they are vulnerable to entanglements in fishing gear, ship strikes, plastic pollution as well as noise disturbance. In this regard, all whale conservation efforts benefit turtles and vice versa!