Does cat poop pose a problem for belugas? 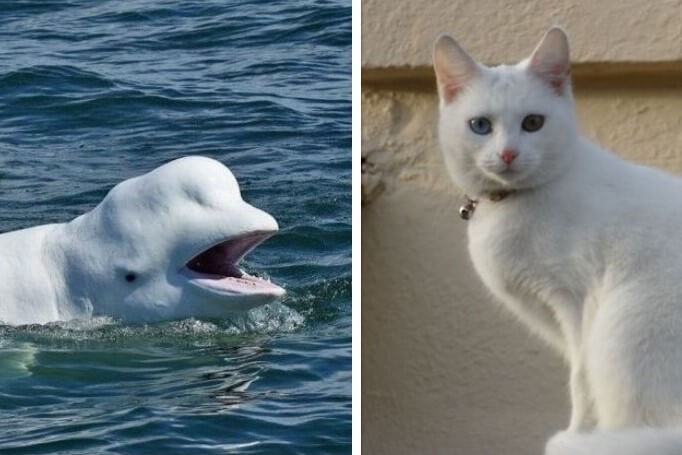 A parasite that infests cats is also found in the St. Lawrence belugas. © GREMM

On cat litter bags is a warning for pregnant women concerning a parasite found in cat feces. What is even more surprising is that this same parasite can also attack belugas. Close to half of all St. Lawrence Estuary belugas that died between 2009 and 2012 were infected with this parasite. Analysis of these carcasses reveals a high prevalence of the parasite, i.e. 44% of all individuals.

The parasite Toxoplasma gondii is smaller than the mites that hide in your pillow. To be precise, it is about the size of the excrement of mites! However, despite its small size, this parasite can wreak havoc in any warm-blooded vertebrate. More specifically, it is the parasite’s oocysts (eggs protected by an ultra resistant shell) that are to be feared. If one of these eggs finds its way into a beluga, it can trigger an inflammation called toxoplasmosis.

Despite its prevalence, the parasite is not always easy to detect. Stéphane Lair, professor at the Faculty of Veterinary Medicine at Université de Montréal, explains: “Very often, the parasite goes unnoticed since it encysts in the animal’s tissues and does not cause an inflammatory reaction.” Thus, since 1983, the veterinarian has been able to determine that just seven belugas have died of toxoplasmosis, but this figure might actually be higher.

The parasite could have indirect, much more subtle effects on its hosts, including belugas. Although the presence of an oocyst is not necessarily fatal, it can nevertheless create neurological deficits such as cognitive difficulties or behavioural changes. Toxoplasma gondii may therefore indirectly make belugas more likely to become entangled in fishing gear or collide with ships.

Jacques Brodeur, biology professor at Université de Montréal, has studied the effect of this parasite in humans. He adds that its effects are not limited to belugas: “Behavioural changes have also been demonstrated in rodents, particularly in relation to risk taking and suicide. Toxoplasma gondii thus encourages rodents to be eaten by cats. This is how it changes host.” When the parasite is inside a beluga, it is out of its usual element and has nowhere to go.

What do cats have to do with all this?

From house cats to lynx, felines are immune to the effects of Toxoplasma gondii. They are therefore simply a means of spreading the parasite via their feces. Contaminated with ultra-resistant eggs, feces are spread by means of runoff in the watershed or through storm sewers. In this way, a parasite from a lynx or your house cat can reach the belugas of the St. Lawrence Estuary.

Close to half of all St. Lawrence Estuary belugas that died between 2009 and 2012 were infected with the parasite, Toxoplasma gondii. © GREMM

How can we limit toxoplasmosis in belugas? For Stéphane Lair, the answer may be purring next to you: “The best way to mitigate the problem is to prevent cats from being able to roam out-of-doors, as this is how they come into contact with parasite-carrying rodents. Preventing contaminated excrement from entering sewage systems could also reduce the presence of the parasite in the aquatic environment since our wastewater treatment techniques are not able to get rid of oocysts.”

For his part, Jacques Brodeur goes on to defend felines: “Cats play an important role in the life cycle of Toxoplasma gondii, but let us not forget that any warm-blooded animal can carry the parasite. Migratory birds have transported the parasite to Antarctica and, globally, between 55% and 60% of the human population lives with encysted oocysts. Think about it: we also send parasite eggs through the sewers and into the river to the belugas!”

To read the study :