At the end of December, seals invaded the ice of Gaspé Bay. ©Laetitia Desbordes

“Cré-moé, cré-moé pas, quelque part en Alaska, y a un phoque qui s’ennuie en maudit” (Believe it or not, somewhere in Alaska, there’s a seal that’s bored out of its mind)… These past few days, while compiling the week’s observations, I can’t stop thinking about these lyrics to a well-known tune by Beau Dommage. It should be pointed out that seals have been omnipresent along the shores of the St. Lawrence and in the reports of our observers.

In the last few days of December, many seals were visible from downtown Gaspé, lazing on the ice of the York River. A couple of handfuls of harbour seals were also present in Pointe-Saint-Pierre. Observers also report a few pinnipeds in Anse aux Cousins, at the Petit-Gaspé haulout and on the rocks of Anse Pleureuse. Two humpback whales visited Gaspé Bay, with reports coming in on December 27 and 31. 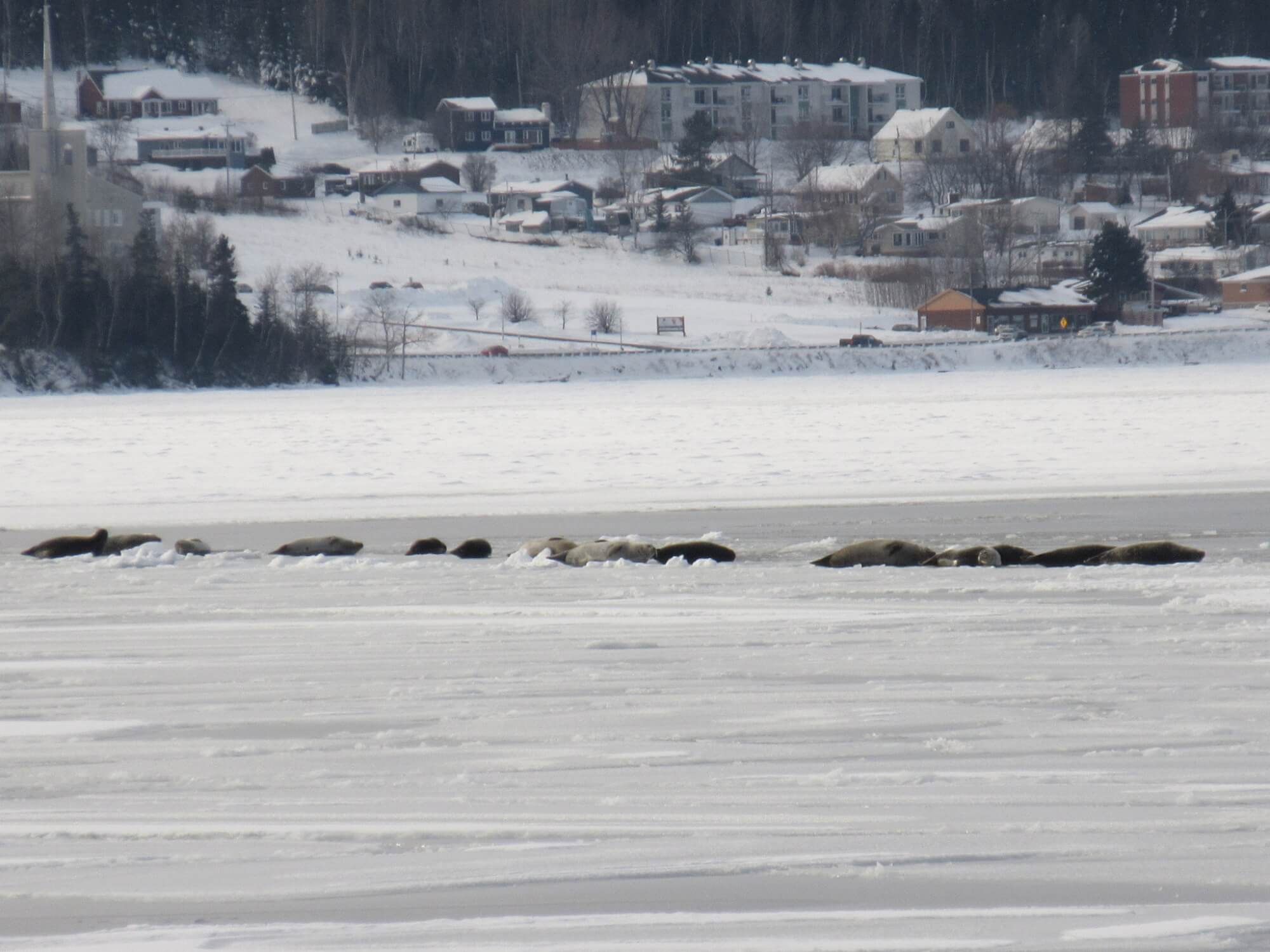 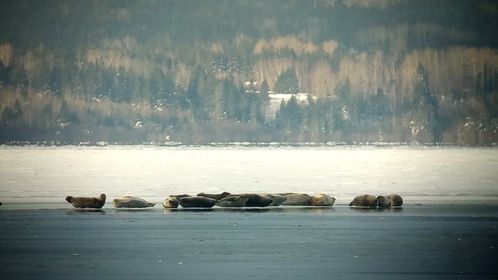 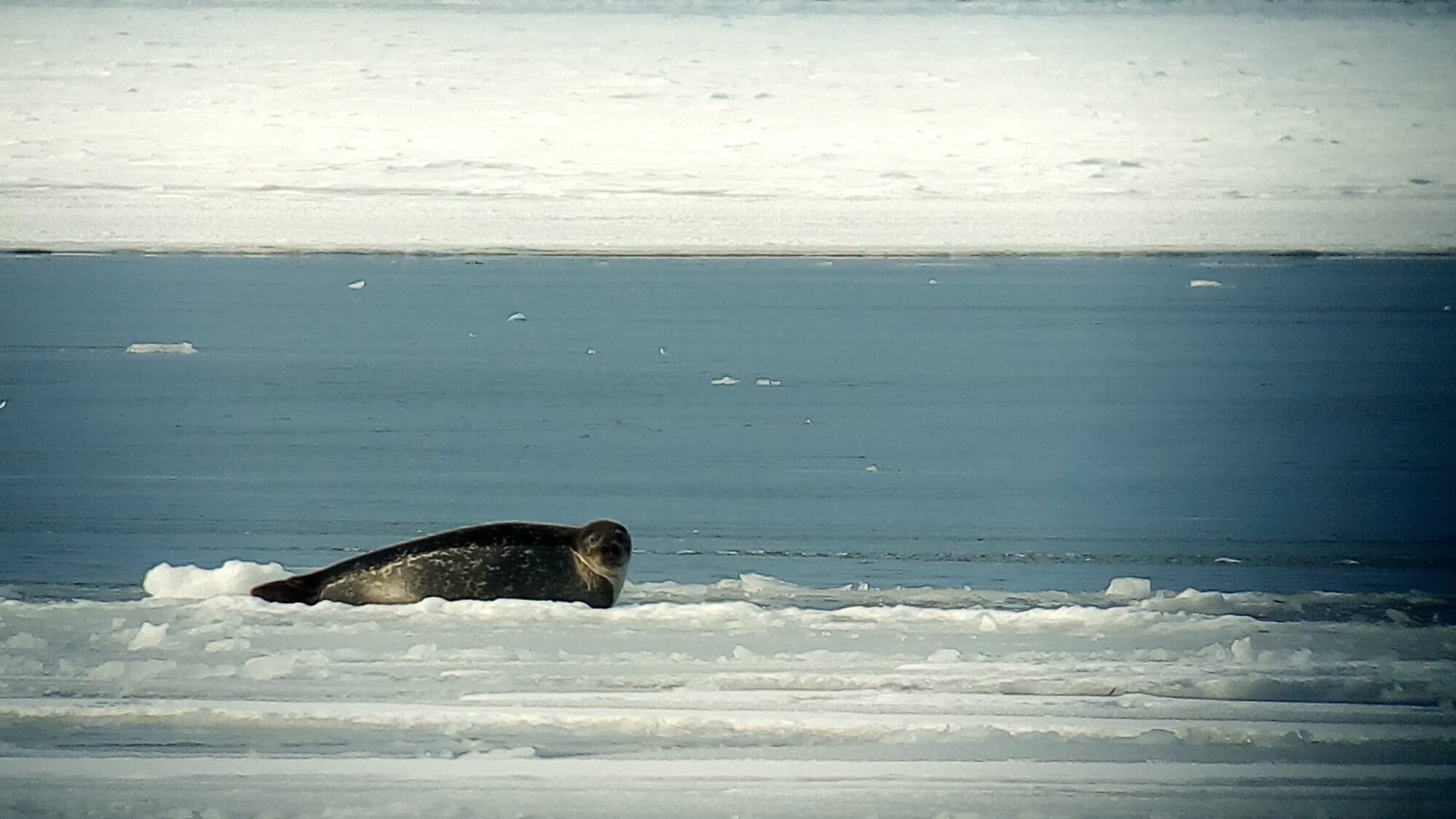 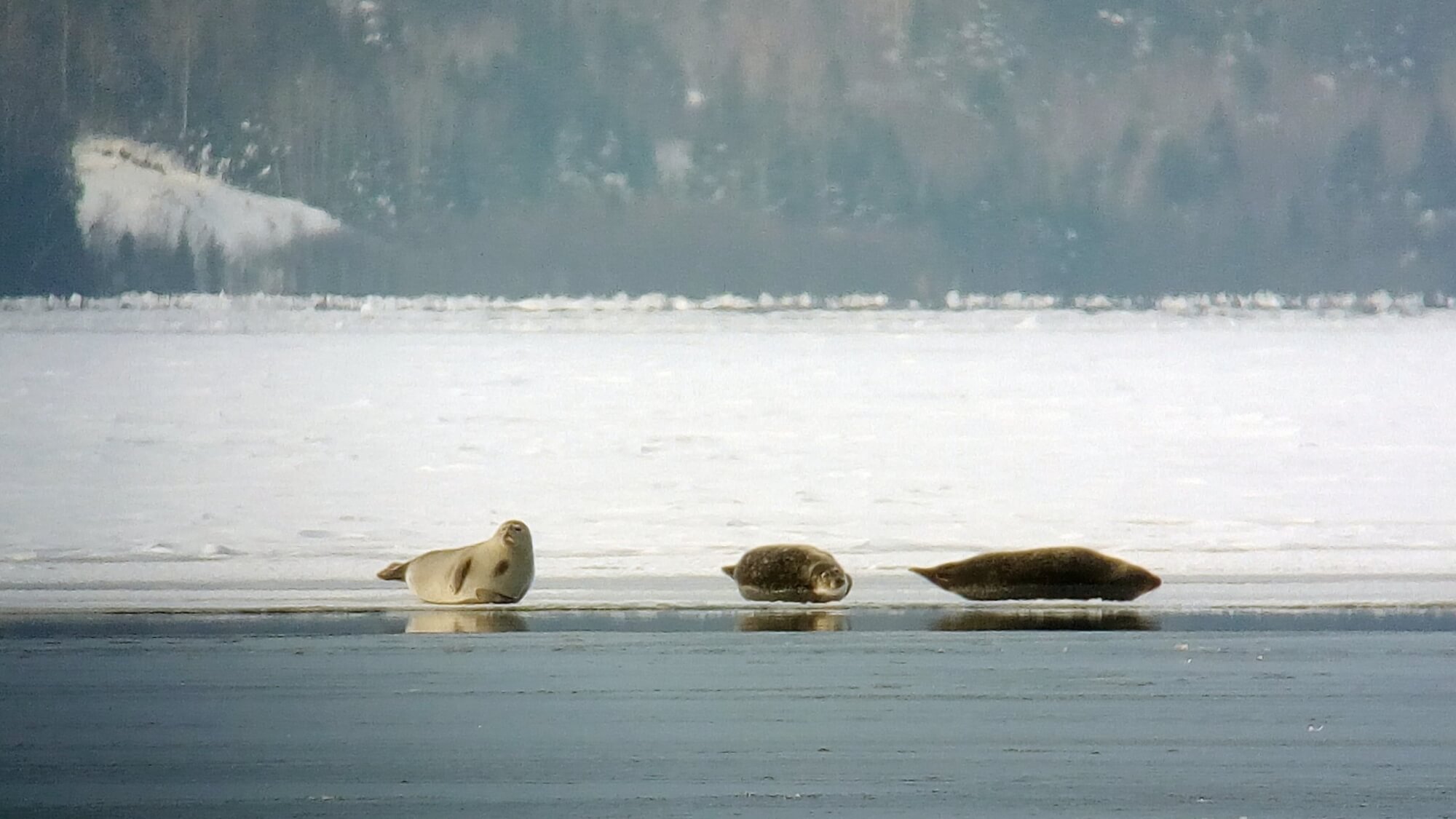 A balloon on the nose

Strange encounter the day after Christmas in Pointe-aux-Outardes: a massive hooded seal resting on the beach. Hooded seals can reach two metres long and weigh between 150 and 300 kg. Suffice to say that their presence does not usually go unnoticed. This species, which is less common in the region than the grey seal, harbour seal or harp seal, is nevertheless a regular visitor to the St. Lawrence Estuary. The hooded seal owes its name to the air sac on top of its head, which males can inflate to form a sort of large balloon as big as their head. 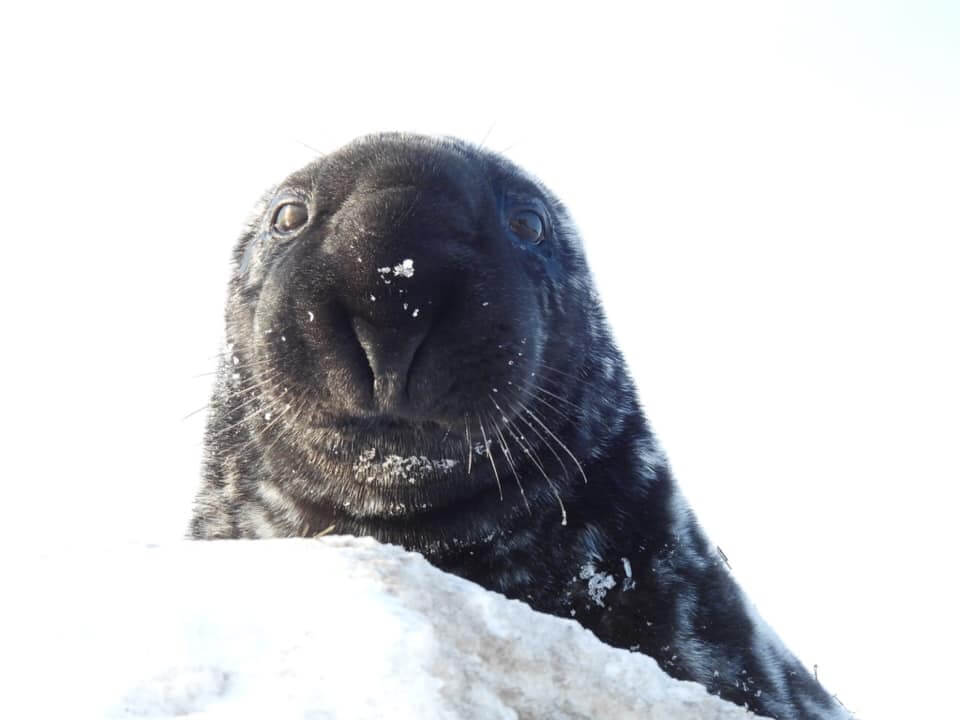 Also in the Pointe-aux-Outardes sector, many harp seals and a few harbour seals have been enjoying the calm shores in recent weeks. Remember that it is normal for seals to spend time on land and that it is important to give them plenty of space to rest without being disturbed.

Let’s take this opportunity to show the difference in morphology and coloration between these three species: 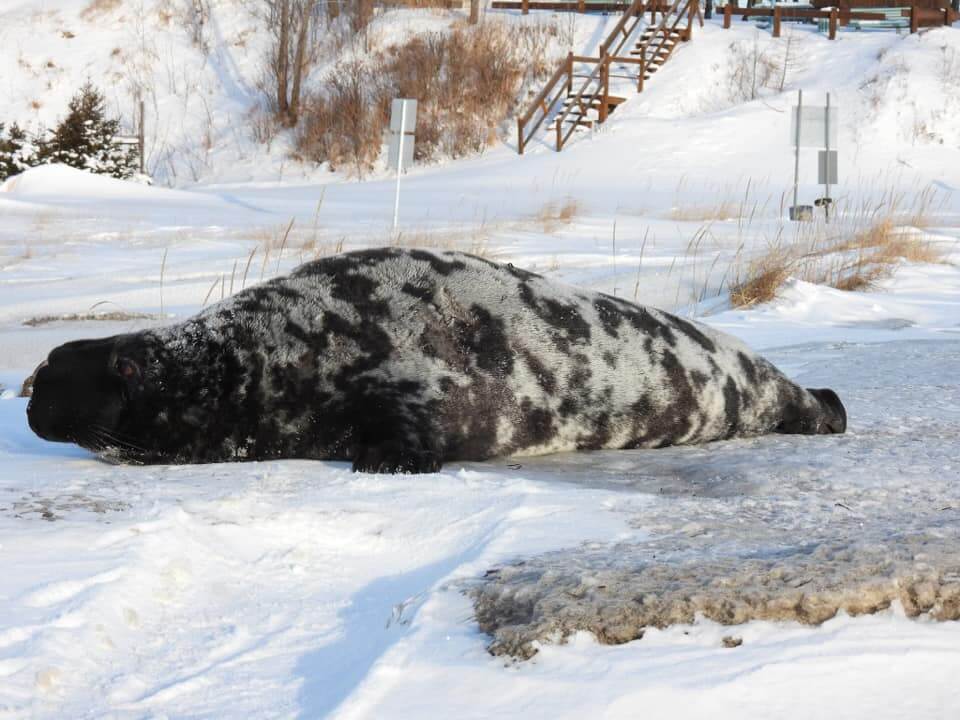 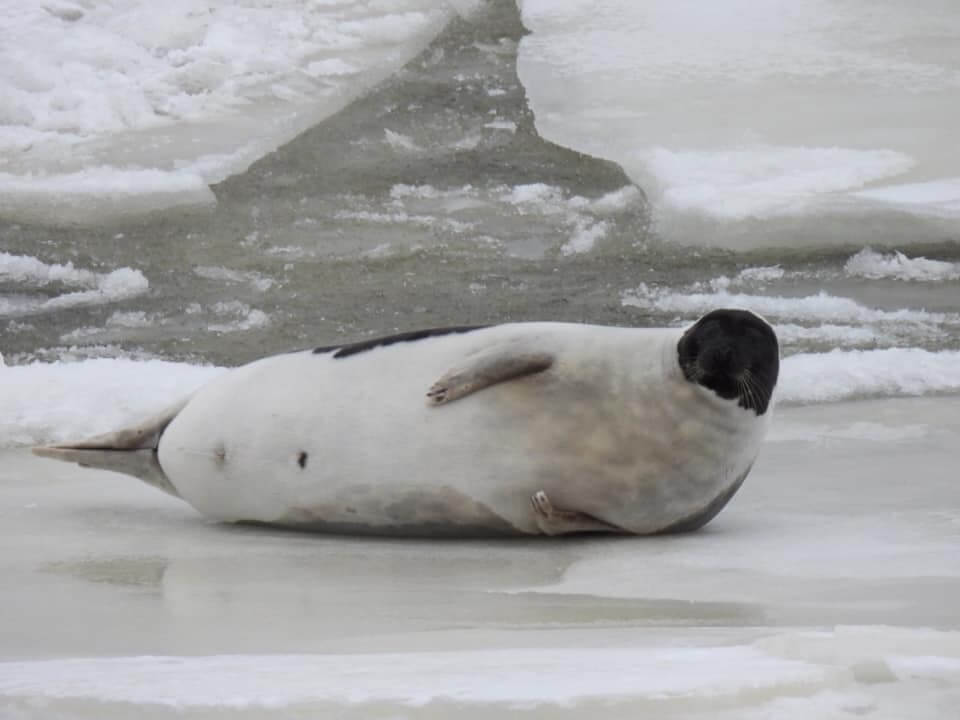 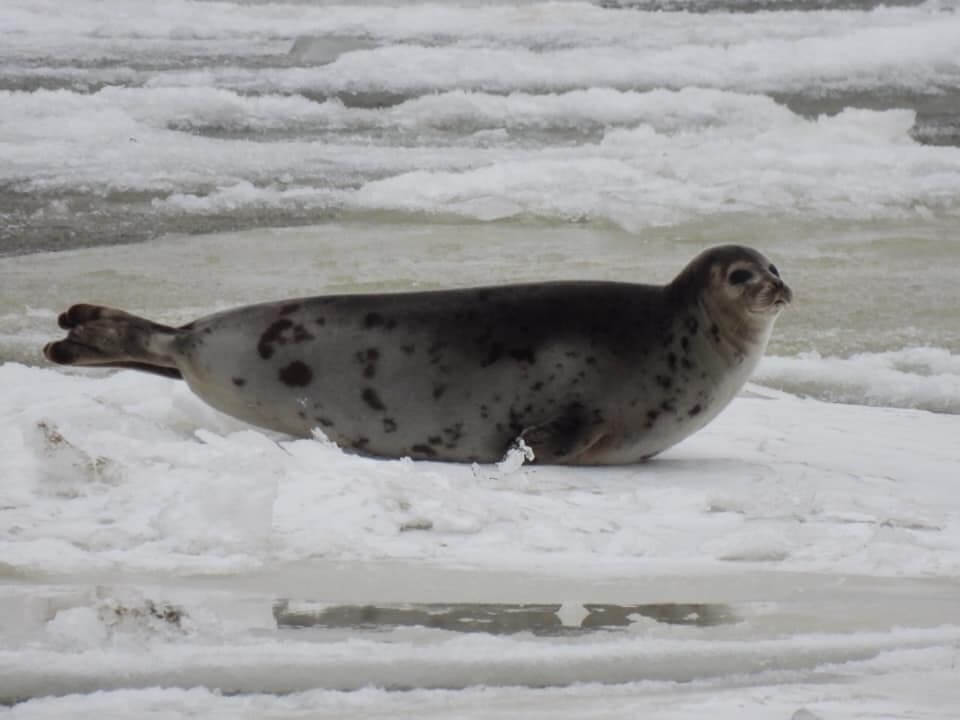 Despite the gradual appearance of a layer of ice in the St. Lawrence Estuary, a few humpback whales are still lingering there, offering a spectacle to the few residents who keep their eyes on the water. On Christmas Day, one observer is in awe: “Near the pilot station in Les Escoumins, a humpback whale breached twice before disappearing below the surface. I saw her three more times… It was as if she was wishing us a Merry Christmas in her own special way!” A few days later, on December 27 and then again on December 29, two humpbacks appeared in the early morning light off the coast of Les Bergeronnes.

In the waters off Franquelin, it’s a veritable parade! A few large spouts were spotted on Christmas Day. “After a few days of good winds and big waves, we were wondering whether we were going to see any whales again. And we did!” exclaims one observer. Two days later, this individual had yet another reason to be excited: “Again this morning, just in front of our house, two beautiful large humpbacks were plying the waters, probably because there was something of interest to them there.” On Tuesday, January 4, we even got a report of about ten humpbacks in the area, not to mention three minke whales.

“There are still several minke whales patrolling the coasts,” points out one observer that saw them opposite Rivière-au-Tonnerre and Longue-Pointe-de-Mingan.

Surprise, surprise! It seems that even white-sided dolphins are still present in the St. Lawrence. They were reportedly seen by several individuals between Christmas and New Year’s, swimming downstream in Franquelin and Godbout. “The River is calm this morning, with no whitecaps on the horizon, says our observer. And suddenly a phenomenon appears before us. We think it’s a pod of dolphins: they were porpoising at full tilt, but never leaped out of the water.” A rare sight this time of the year, but cetaceans have a knack for constantly surprising us!

Lastly, on behalf of the entire Whales Online team, I wish you a very happy 2022! Once again this year, we will strive to tell you every week what’s happening in the waters of the St. Lawrence. We thank our observers for their dedication and you, our readers, for your loyalty! 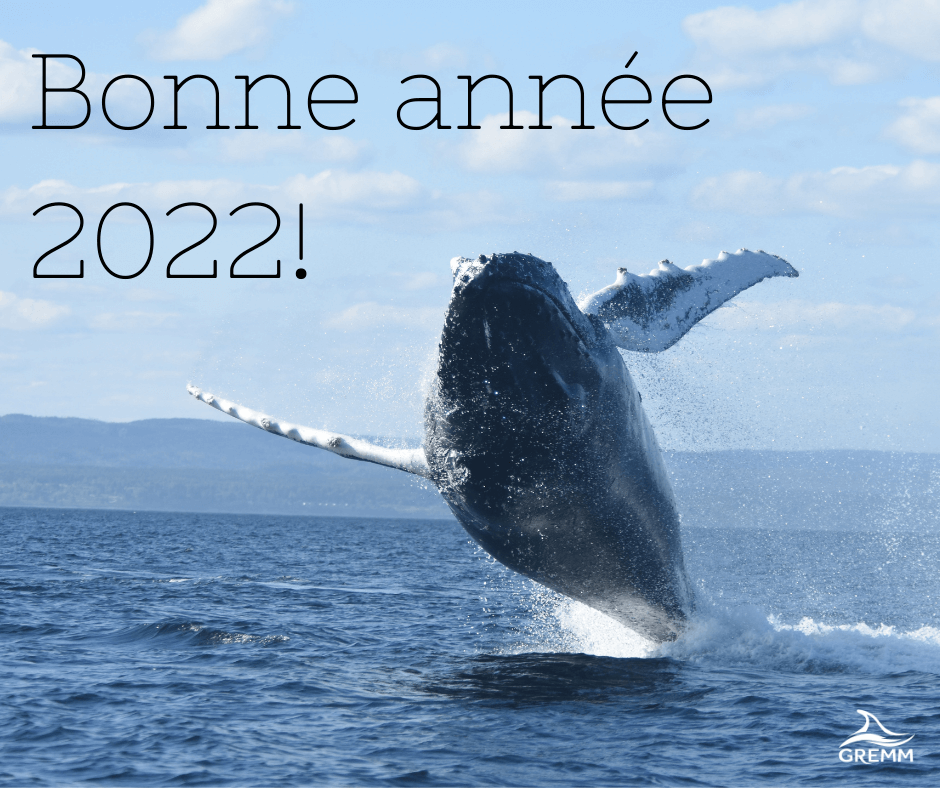 Do you enjoy scanning the waters every chance you get? Become an observer for Whales Online!

In order to continue to feed our “Observations of the Week” column, we need to recruit new volunteer observers who can relay to us their weekly encounters with marine mammals. More precisely, we are looking for people based in the Bas-Saint-Laurent region and downstream of Sept-Îles. Interested? Drop us a line at [email protected].