“Now the season can start!” 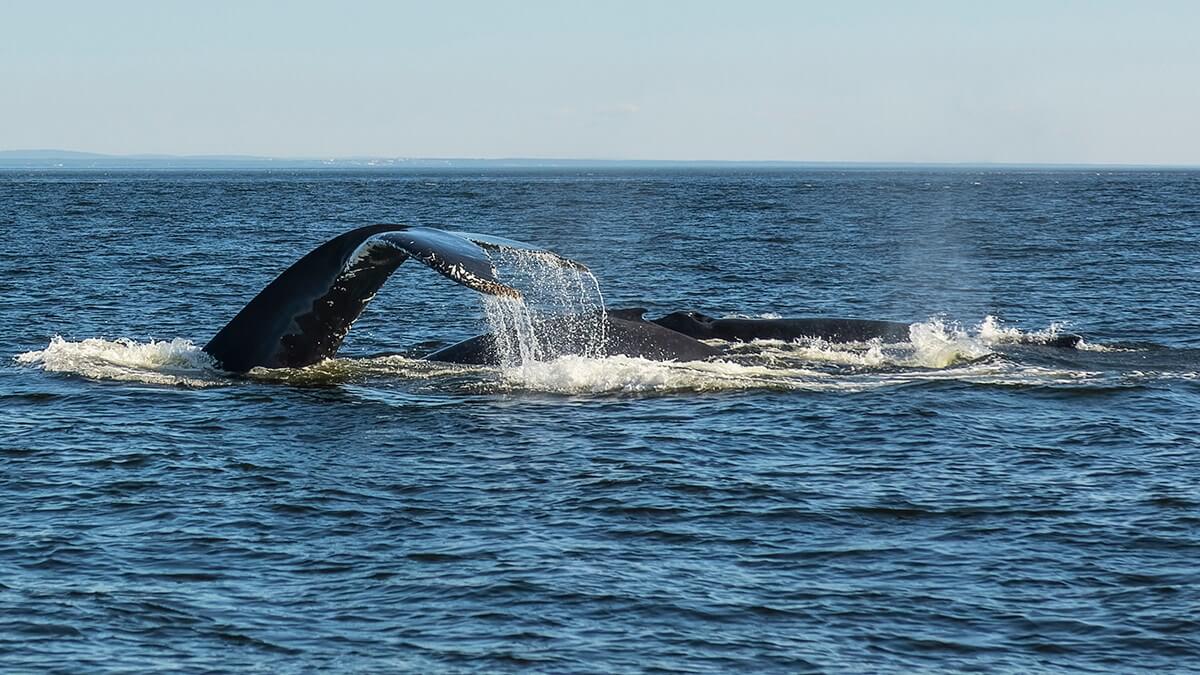 On June 28, Tic Tac Toe was observed with a young individual and her calf from last year (H8014). © Valérie Thériault-Deschênes

A certain enchantment can sometimes develop between whales and the naturalists who observe them. For naturalist and wildlife photographer Renaud Pintiaux, it was his encounter with Tic Tac Toe that made a particular impression on him, and this animal once again inspires awe when the two cross paths on Tuesday afternoon: “Tic Tac Toe was the first humpback whale I ever saw,” he writes. “It was 1999, well off the coast of Tadoussac, near Île Rouge. She was tiny… about two years old. Since then, she has returned almost every year, and always around the same date, which happens to coincide with my birthday!. Now, at 25 years old, here she is again. The greatest joy possible… Tic Tac Toe is back. Now the season can officially start.”

This famous humpback seems to have her own habits: “She is often seen in early June for a few days, after which she leaves and comes back again in July for a longer period.” In the course of his observations on June 28, Renaud Pintiaux also noticed other humpbacks in the area: “They were surface feeding. There were plenty of gulls around and they were probably eating krill. Earlier in the season I saw them mostly feeding on small sand lance and capelin. This is the first time this year I’ve seen krill, which might also explain the return of several large whales.”

Elsewhere in the region

Other whales were also observed in the Saguenay-St. Lawrence Marine Park over the past week: the backs of 3 or 4 fin whales, the spouts of 5 humpbacks, the dorsals of several minke whales, not to mention the heads of a number of harp and grey seals. In Les Bergeronnes, between 6 and 8 harbour porpoises were reported on the evening of June 28. 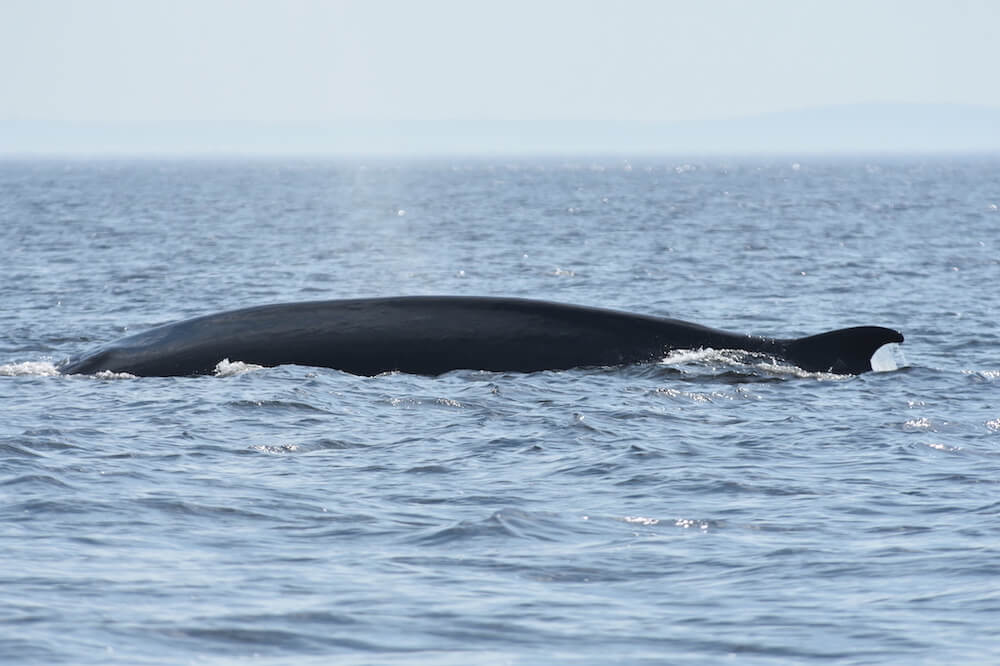 Fin whale BP059, a.k.a. Trou, was observed this past week in the Marine Park. © GREMM 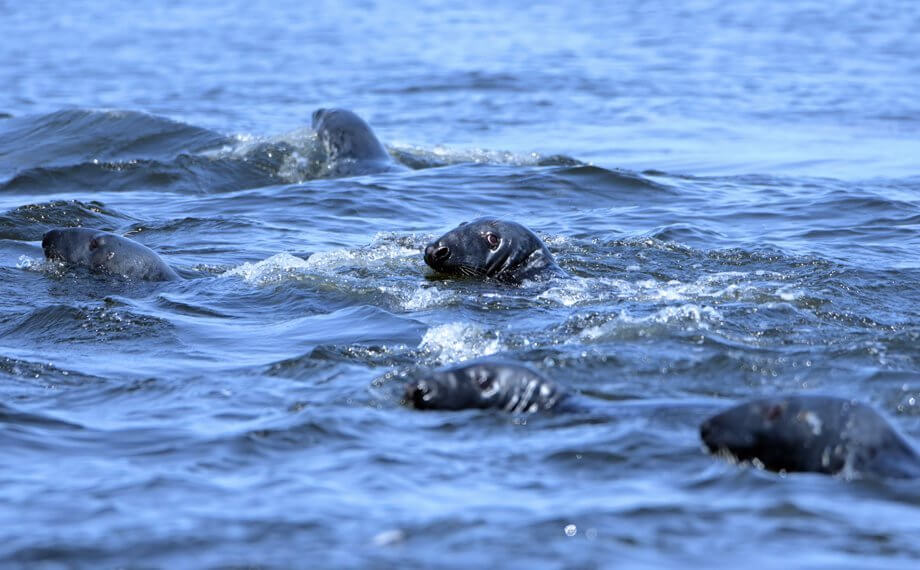 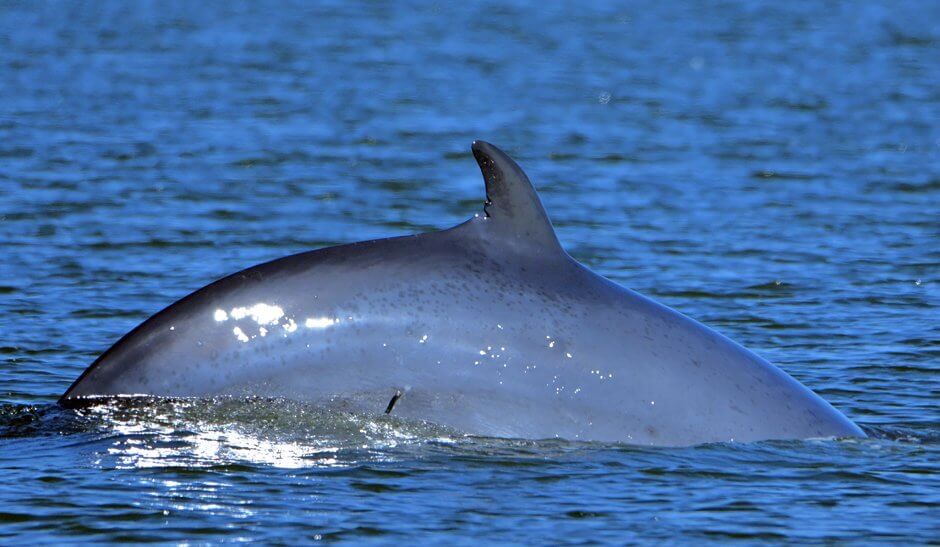 Minke whales can sometimes be parasitized by lamprey. © Renaud Pintiaux

A few belugas have been swimming in Baie Sainte-Marguerite and near Les Escoumins, while about forty white backs have been regularly spotted from the Pointe-Noire Interpretation and Observation Centre in Baie Sainte-Catherine going up and down the Saguenay. On the south shore of the St. Lawrence, near Saint-Félicité, between 15 and 20 belugas, including two young individuals, were seen swimming about 2 km from the shoreline.

In La Malbaie, a spout was seen off the Cap-à-l’Aigle sector, probably that of a minke whale that has been hanging around the area for a few weeks. Another mammal is also spotted in the water near Port de Refuge, though it is neither a cetacean nor a pinniped, but rather an American mink. “We’ve been seeing it since the start of the season. It scurries along the shoreline and has been feeding on ducklings. Every morning we count the little ones, and sometimes one is missing. At first there were about ten, but now there are only five left.” 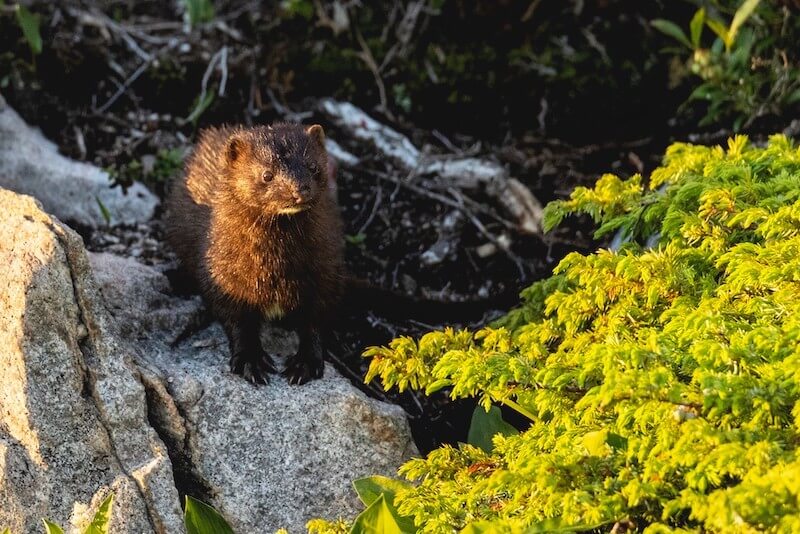 Mink can hunt fish at the water’s edge. © Valérie Thériault-Deschênes

Necessity or all for show?

In Gaspésie, marine mammals have been abundant. One whale enthusiast shares her tally: “A dozen humpbacks in Gaspé Bay, several minke whales, a fin whale that was also present two days ago, and a few porpoises. Regarding humpbacks, there was a very active youngster who gave us quite a show yesterday and today: breaching, pectoral slapping, caudal fins in the air…” Even if these behaviours are always quite awesome to observe, the whales are probably not merely seeking to impress their spectators. They may be feeding or even socializing.

From the Mingan Archipelago to Pointe-aux-Outardes, the stories being told by whale enthusiasts reflect the presence of several species along the north shore of the St. Lawrence. Approximately one hundred grey seals, sixty or so harp seals and 5 or 6 minke whales were seen in the vicinity of the Mingan Archipelago. A harbour seal was observed in the Bay of Sept-Îles. In Godbout and Franquelin, humpbacks, minke whales and a dozen or so fin whales have been present, while a large blast was spotted off the coast of Pointe-aux-Outardes.

Where are the whales this week? Map of the observations

A tightly knit network of experienced observers who live according to the rhythm of the St. Lawrence throughout the year. On the waves or on shore, they scan the horizon with passion and patience, watching for the slightest spout. It is thanks to their sharp eyes and living words that we are able to write Observations of the week week in and week out. A big thank you to all of our precious collaborators!