Is ice a significant natural threat to blue whales in the Gulf?

Revisiting the photos I took this past summer, I pondered some of the specific markings I had observed on blue whales.

On June 1, 2014, I photographed off the Forillon cliffs the individual known as B298 in the blue whale photo-ID catalogue maintained by the Mingan Island Cetacean Study (MICS). It had a fresh and rather large wound on the left side of its peduncle, as well as scratches on its blowhole and back. 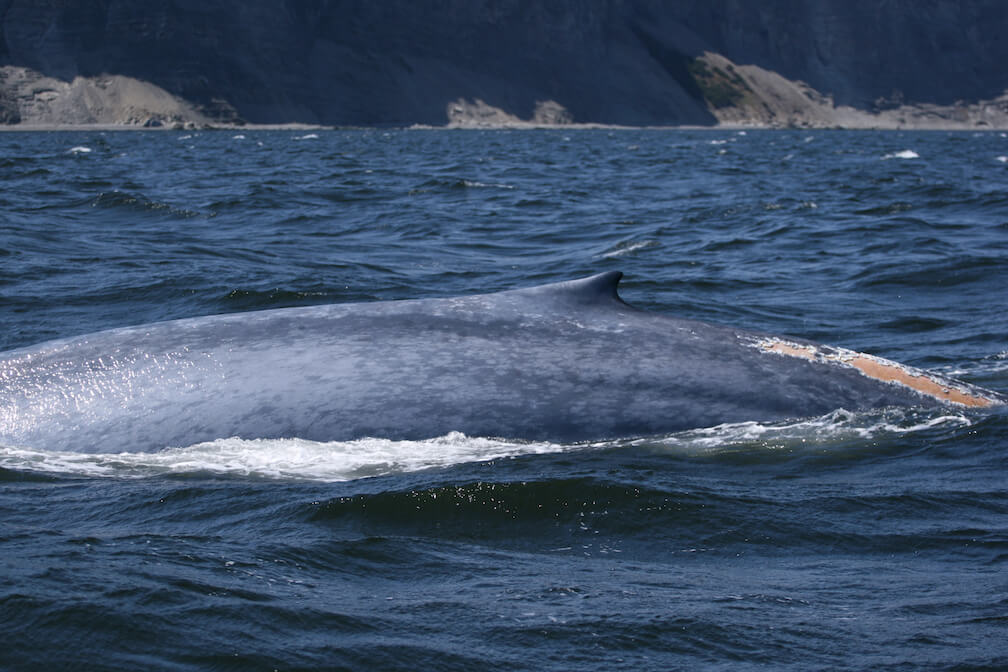 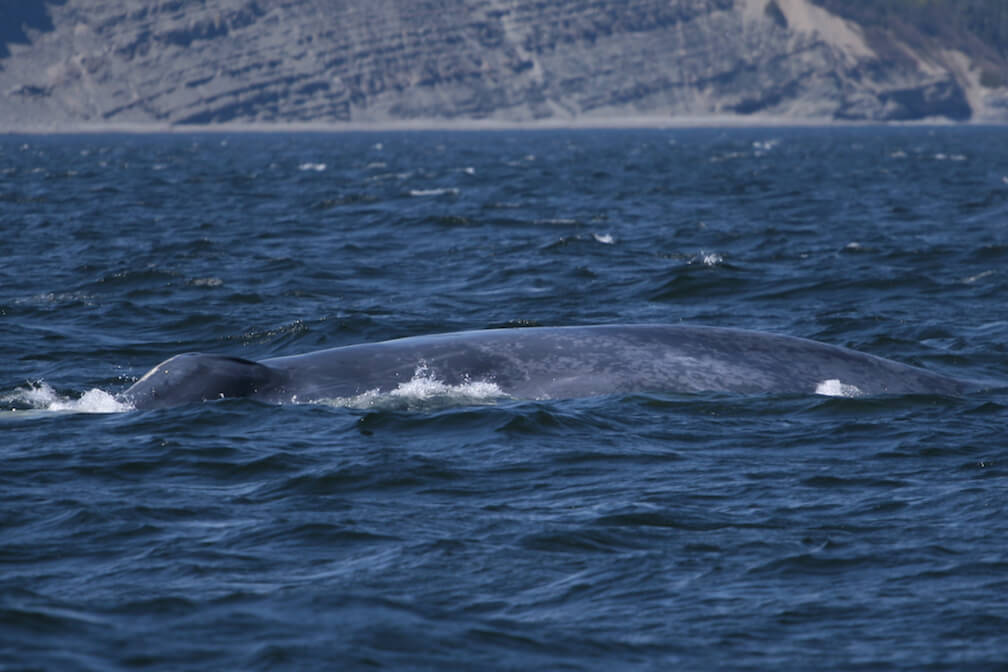 Five years later, on August 26, I saw this individual again off Sainte-Félicité near Matane. The wound on the peduncle seemed to have healed well and left traces of scarring. This injury may appear superficial and relatively minor compared to the size of this giant, but, as MICS biologist and director Richard Sears points out, it opens the door to possible infection and long-term adverse effects on its health. 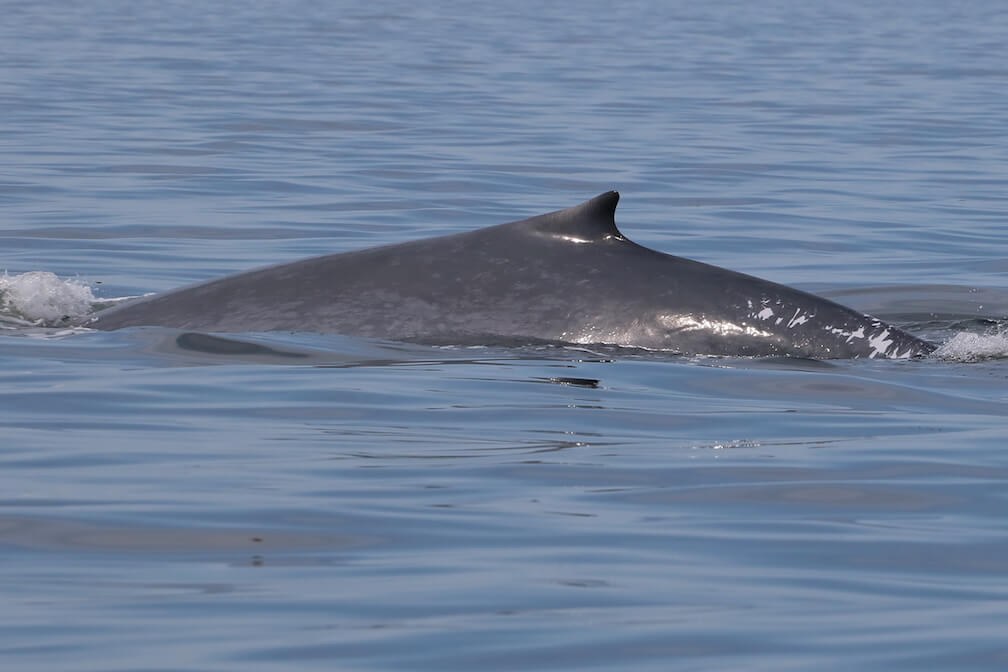 Was the injury caused by rubbing under the 2014 ice cover? Perhaps. Blue whales are known to occur throughout the winter in the Gulf of St. Lawrence. That same year (2014), nine blue whale carcasses were found off the southwestern coast of Newfoundland, trapped in wind-blown ice.

Last season, I photographed other blue whales with the same type of injury. Large and rather deep wounds spanning nearly the entire length of the animal’s upper parts, probably the result of severe rubbing.

Early in the season, I observed in Gaspé Bay the male B397, a.k.a. Doru, which bore similar wounds that stretched from the rostrum to the middle of the back, including the blowhole. 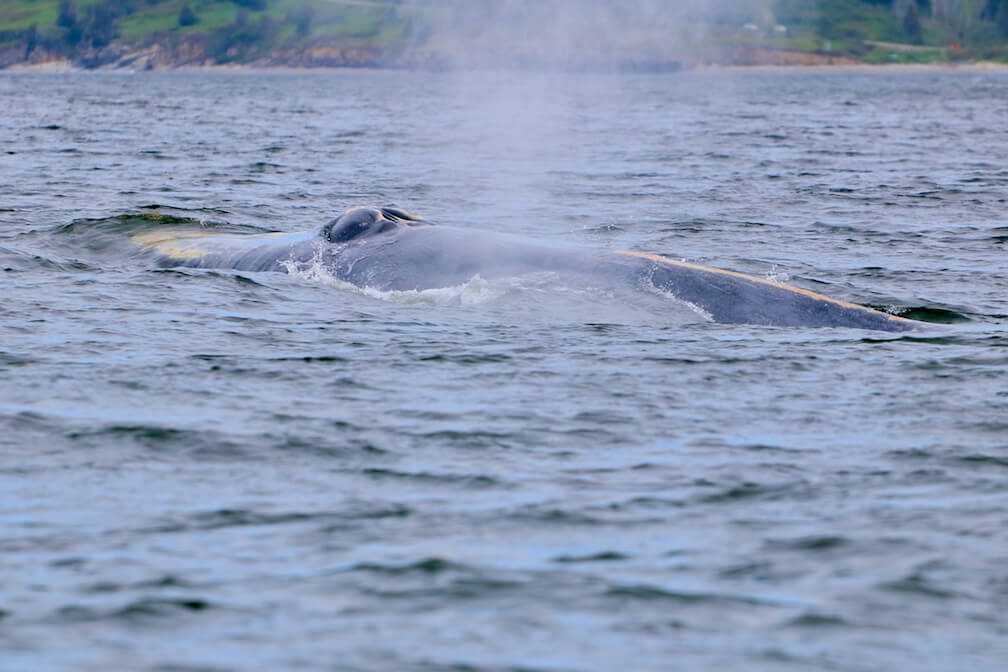 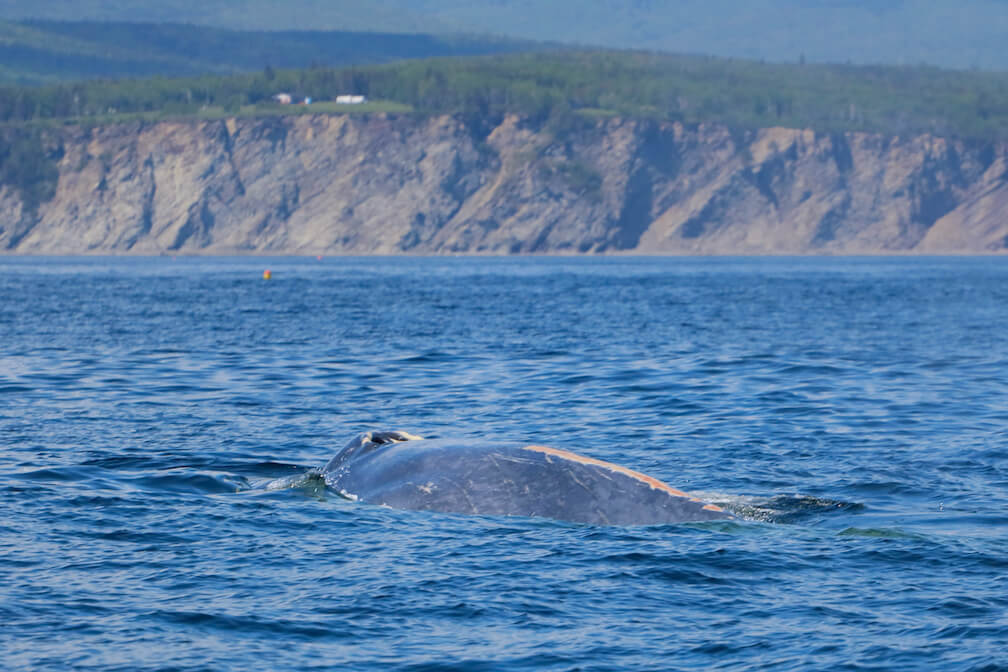 At the end of August, off Matane, I encountered B093, an old male and regular visitor to the Estuary. It also showed the same kind of injury in the middle of its back. 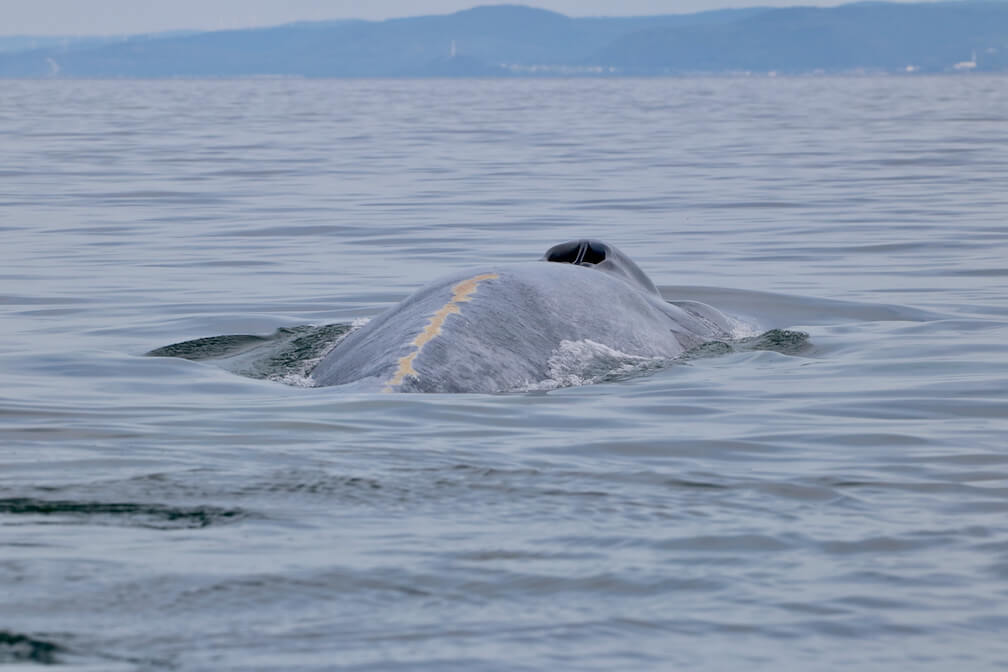 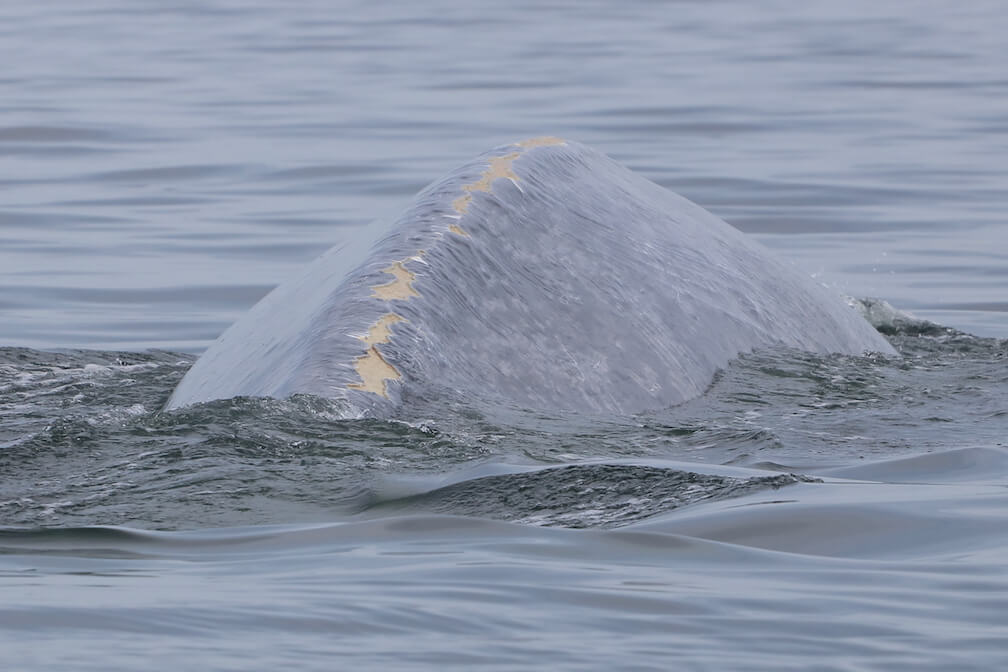 Another individual, B501, observed on August 28 off Matane (photos by Patrice St-Pierre) also presented large but more superficial scratches over the animal’s blowhole and back. Is the same cause at play? 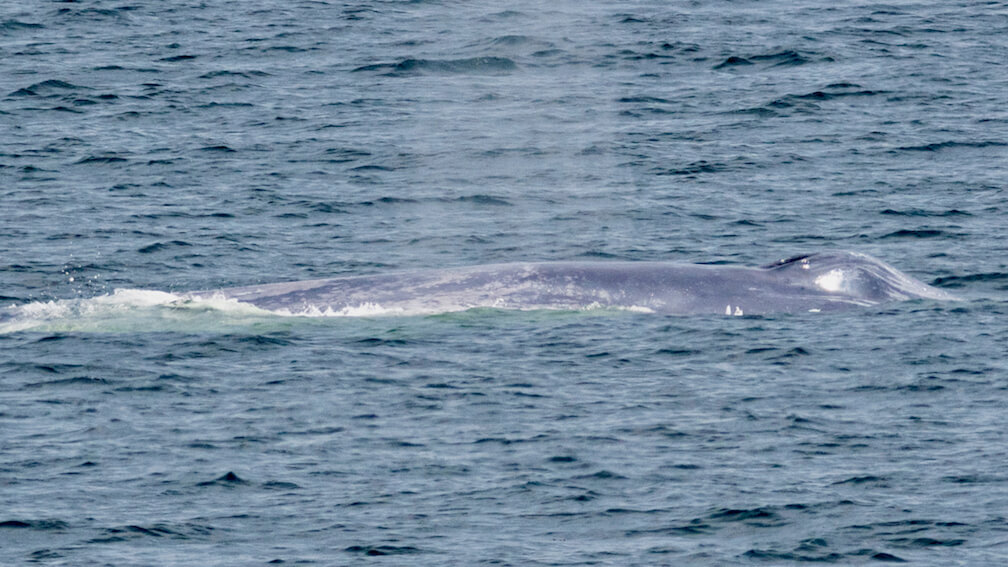 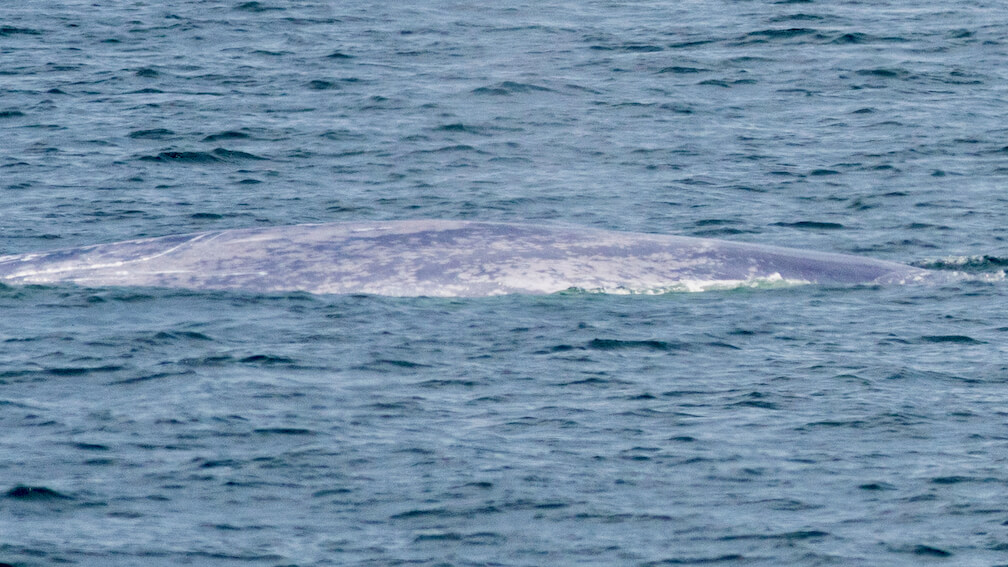 Fisheries and Oceans Canada researcher Peter Galbraith noted unusually low water temperatures in the Gulf in the winter of 2018-2019. In fact, Gulf waters were the coldest they had been in 24 years. He points out that this cooling is an exception to the overall warming trend observed in recent years. He explains that polar vortices and strong winds have contributed to the formation of a thicker layer of ice.

Are these ice conditions to blame for the higher number of back wounds observed in blue whales in 2019? Are blue whales lingering longer and in greater numbers in the Gulf in winter? Is there a correlation with ocean conditions? What other elements might have caused these particular markings? This is a reminder that there is still much to learn about blue whales, and that natural habitats can sometimes be very hostile.