Irisept, a White Tail and Other Humpback Whale Stories 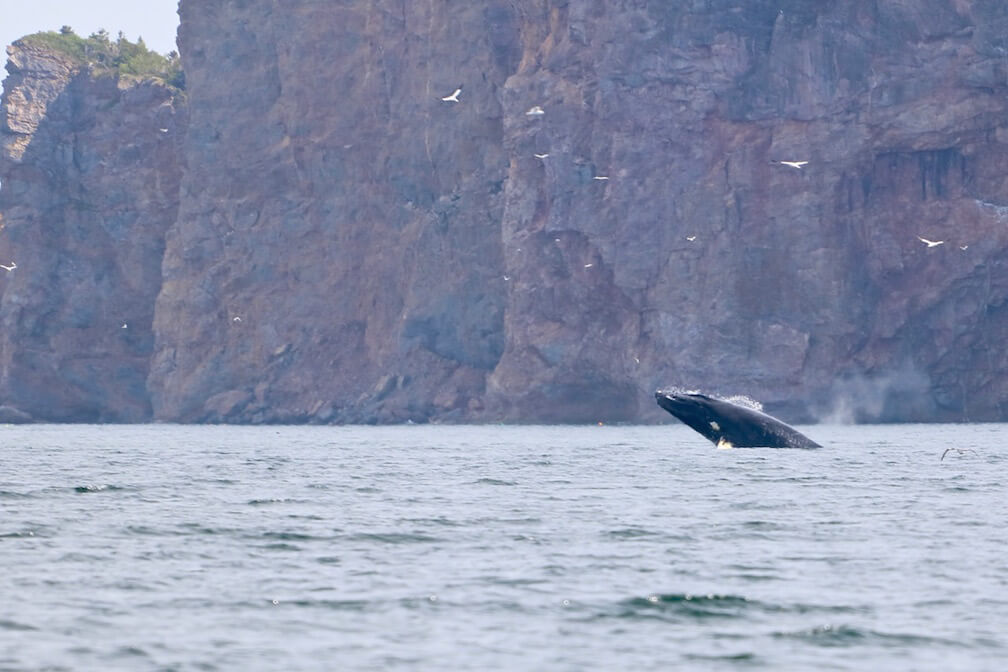 “For a number of people, the weather these past few days has been the motivating factor to get out and search for whales,” says one crew member, “but those who made the effort were treated to a feast for the eyes!” he points out. In fact, on June 1, one humpback whale is seen just off the village of Grande-Grave. The same day, the owner of a L’Anse-au-Griffon campsite is ecstatic after witnessing a dozen or so blows – some tall and straight, others rounded – spouting out of the water opposite his establishment.

On June 4, two humpbacks are encountered at sea: one off Cap-des-Rosiers, the other near L’Anse-aux-Amerindiens. The latter turns out to be the female Irisept. Here she is again, a regular visitor to the St. Lawrence who has been returning to these waters for over 20 years! Last summer, she was identified in the Gulf and in the Estuary, where she was accompanied by her calf, the first one observed at her side in the last two decades of encounters! Humpback newborns are generally not recognized as they get older, i.e. when they return weaned from their mothers, as their undertail colour patterns change significantly in the first 5-6 years of life.

In the sector between Les Escoumins and Les Bergeronnes, a humpback whale is seen on June 3 and 4. Visitors to Parks Canada’s Cap de Bon-Désir site enjoy up-close views when the animal comes practically right up to the rocks and lifts its strikingly white tail out of the water. Whether from land or at sea, a number of observers take pictures during this period. Some of these photos have been sent to the Mingan Island Cetacean Study (MICS) team, which manages the St. Lawrence humpback whale catalogue.

As a matter of fact, the MICS team has just arrived at its summer quarters in Longue-Pointe-de-Mingan for a 40th summer on the water! We wish them a season just as “bountiful” as that of 2017, when they identified a total of 121 humpbacks in Estuary and Gulf waters! But first, it’s time for a little boat maintenance before heading out to sea.

In Sept-Îles, Jacques Gélineau discovers two humpbacks near the Îlets De Quen, one of which even performs a full breach! Two other large rorquals are seen offshore, beyond Sainte-Marguerite Bay.

Lastly, in addition to the humpback whale mentioned above, the Saguenay-St. Lawrence Marine Park region has also been host to one or two fin whales, several minke whales and porpoises, not to mention belugas. In Saint-Siméon (Charlevoix), a herd of 100 or so belugas was spotted on June 2!

Yes, whales are numerous and they are likely to become even more plentiful in the weeks to come!