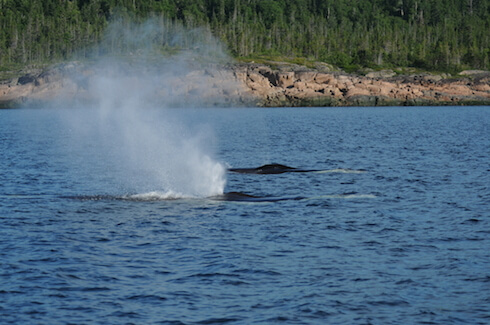 For the first time in several months, a considerable number of News from Afield observers have observations to report. First, upstream, at Sainte-Irénée in the Charlevoix region, a whale lover observes a group of at least six belugas from her home: “the tide comes in and they always fish in the same spot! I’m looking forward to tracking them again this season!”, she writes. In Tadoussac, belugas have been seen almost daily in the Saguenay Fjord in the past few days. Here, too, they seem to swim in circles between Pointe Rouge and Batture aux Alouettes. On the other side of the Estuary, a resident is thrilled to discover the return of the white whales when she spots a small group of five belugas between Rivière-du-Loup and Île du Pot à l’Eau-de-vie.

A captain of the Tadoussac – Baie-Sainte-Catherine ferry is surprised to see thirty or so gannets flying around his boat, just as a resident of Cap-à l’Aigle was who noted two gannets passing by. “Are they lost or in search of food?” he asks. According to an expert in this species, gannets have always flown up the Estuary this time of the year, most likely to feed on spring herring. What is unusual is to see them so regularly and in such high numbers in the middle of summer.

Les Escoumins is the location of the first reports of fin whales this year; two large spouts are seen on April 13. The next day, a fin whale surfaces practically within arm’s reach of where the Escoumins – Trois-Pistoles ferry is docked. On April 15, a captain plying the St. Lawrence near the Prince Shoal Lighthouse encounters one of these behemoths, in addition to a minke whale. Four days later, another fin whale is reported in the early morning in Baie des Anémones near Les Escoumins.

There’s good news from the Gulf as well! Pointe-des-Monts marks the end of the Estuary and the beginning of the Gulf of St. Lawrence. From this point, an outdoor enthusiast contemplates the passage of a dozen belugas on April 15. And, that same day, three large whales are spotted off Cap-aux-Os in the Gaspé Peninsula and sixty harbour seals are seen basking on the sand bar at Sandy Beach in the town of Gaspé.