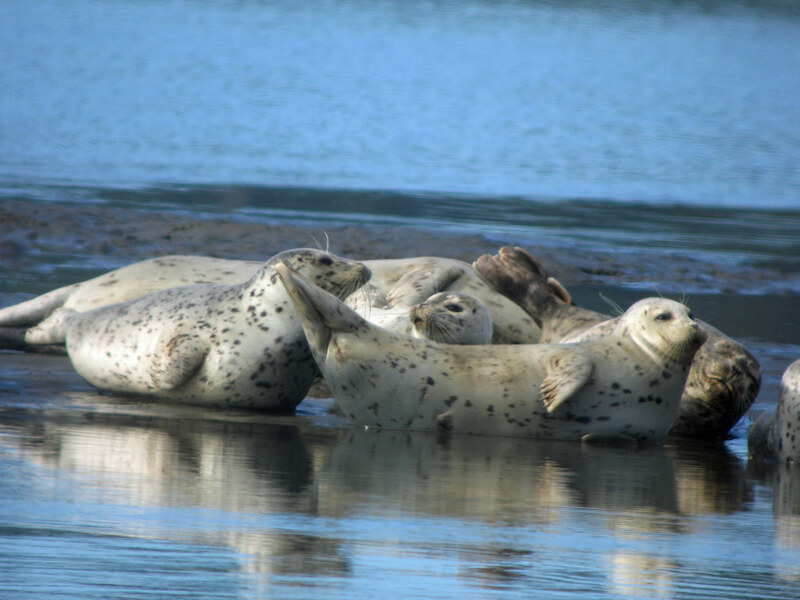 At the foot of the mountains rising above the Fjord, small groups of harbour seals lie on the rocks. They are observed in their typical “banana” position, in other words, with their head and their rear flippers curved upwards. Through binoculars, it is even possible to discern their “dog-like head” with the dip in the forehead, short snout, large close-set eyes and heart-shaped nostrils.

René Roy encounters a few harbour seals during his trip out to the Estuary on June 6. At Île du Bic, he spots an adult and a pup on rocks. Unlike many other species, young seals can swim from birth, but tire out quickly. Its mother will leave it frequently to feed offshore for short periods. This little one is neither in danger nor has it been abandoned. It waits for its mother to return and maintains contact with her with vocalizations and its sharp sense of smell. During his loop out to sea, René Roy also crosses paths with a fin whale. His photos make it possible to identify F631 thanks to the details of its chevron, a unique colour pattern behind the head.

Members of the MICS team in Gaspé continue their work placing transmitters on the backs of humpback whales together with the Sea Mammal Research Unit. On June 12, a third attempt made on an individual swimming in the company of the female Fleuret is successful. Drone-shot images of the pair are available on the MICS’ Facebook page. Fleuret has been known since 1982. Last summer, her one-year-old calf was seen in the Marine Park area. It was recognized by its small size, its heavily scarred dorsal fin, and because it did not lift its tail when it dove.

Humpbacks can be recognized by their tails much in the same way as humans are recognizable by their faces. The unique colouring on the underside of the tail facilitates photo-identification. This week, five humpback whales are seen in the Gaspé area. In addition to Fleuret, Leprechaun, Snowball, Dark Star and Bad Chemistry are identified. Research scientist Anik Boileau from the Sept-Îles Education and Research Centre (CERSI) reports the humpback whale Calanus as having been present since June 3, as well as four other humpbacks, eight minke whales, four minke whales and fifteen or so porpoises, including three mother-calf pairs. In blue whales, the technique used for identification is based on the animals’ mottled pigmentation. On June 9, an extremely long gray-blue “cross-stitched” back is seen in Gaspé Bay. West of the Magdalen Islands, a team from Fisheries and Oceans Canada spots the V-shaped spout of a right whale. Its identity remains unknown, however, as no photos are taken. To differentiate individuals of this species, researchers rely on the pattern of skin growths that each individual shows on its head.

Photo-identification can be used to track the movements, social organization, behaviours and even the abundance of individuals of a species. Although in theory it is possible to recognize each whale by its distinctive markings, in practice it is far from being that simple! For every hour spent in the field taking photos and notes, dozens of hours will be needed to analyze them in the lab!