Summer Frenzy in the Gulf 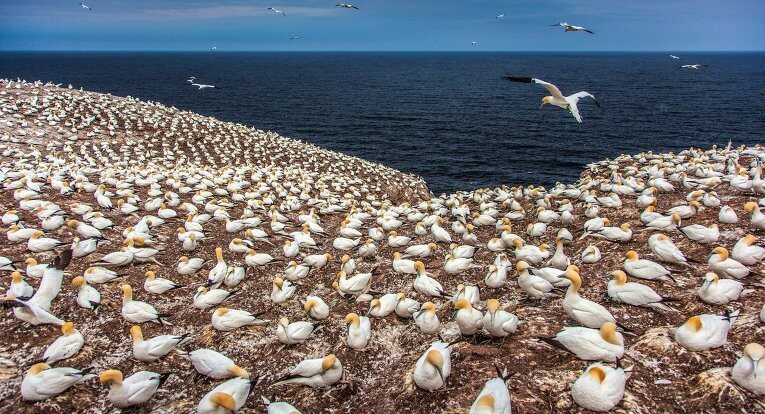 From a vantage point on Bonaventure Island off the Gaspé Peninsula, a park warden spots two humpback whales on June 7. One of them is small. “A calf,” he assumes. The day before, the female humpback Bad Chemistry is seen accompanied by her young in the heart of Gaspé Bay. Could it be the same pair that made its way up here? Perhaps.

Off the island’s shores, minke whales share their hunting grounds with northern gannets. The latter “steal” fish previously corralled by the whales by diving straight into the schools… at speeds of up to 100 km/h. To accomplish this feat without injuring itself, a gannet’s body is protected by a series of air sacs under the skin of its head and breast that cushions the blow. In addition to waterproof plumage, it is also equipped with a protective membrane over its eyes and secondary external nares that prevent sudden water intake.

On June 5, Bad Chemistry is fitted with a monitoring tag on her back. Teams from the Mingan Island Cetacean Study (MICS) and Scotland’s Sea Mammal Research Unit are behind the project. Their mission: to better understand the diving behaviour of these baleen whales. The team managed to “stick” the tag using a system of suction cups. It then falls off on its own in under 24 hours, floats and is recovered; data are downloaded, and the tag is reused for another survey. In the course of monitoring Bad Chemistry, researchers observe this mother and her little one hunting at the water surface. The following day, researchers once again deploy a tag, but this time on the back of Boom Boom River, a.k.a. BBR. Although this female humpback is known by this name in the Gaspé and Mingan regions, she is referred to as Gaspar in the Estuary. “Gaspar” is the result of a contest organized during her first stint in the Marine Park in 2006. People from the region’s whale-watching industry had chosen this name in honour of the famous friendly ghost that can be discerned at the tip of her right lobe. Her name in the Gulf of St. Lawrence refers to the first observations made by MICS in 2005, not far from the municipality of Rivière-au-Tonnerre, affectionately nicknamed BBR (Translator’s note: placename translates as “thunder river”, hence “Boom Boom River”), by locals.

The MICS crew also crossed paths with nearly a dozen humpbacks, four fin whales and a blue whale near Gaspé Bay over the past few days. For the other part of the team, based at the Longue-Pointe-de-Mingan station, observations get off to a slow start with one minke whale and a few porpoises. One of the team’s collaborators in Sept-Îles reports the presence of five humpbacks off the coast. In Franquelin, one observer happens upon a herd of a few dozen harp seals. What are they doing there? Are they not supposed to migrate to the Arctic once summer arrives? Most of them, yes, but small groups occasionally buck the general trend and spend the summer in the St. Lawrence feeding on capelin and other small fish. These fast swimmers can reach speeds of 15 to 30 km/h. Sometimes they leap out of the water, which dramatically reduces their energy expenditure as they spend less time fighting water resistance.

On June 7, at sunrise, a kayaker spots a herd of some 50 to 100 belugas off Les Bergeronnes. The animals are scattered, with the herd stretching over one nautical mile in the observer’s estimate. At Baie-Sainte-Marguerite, beluga herds have been observed since June 2. “Their movements seem to be timed to coincide with the tides,” points out a naturalist on site. Oftentimes, beluga groups swim “up” the Fjord at high tide and, conversely, head toward the mouth with the outgoing tide. They use the currents to their advantage to save energy while swimming. Although belugas are built to purpose (hydrodynamic body, powerful tail, smooth skin and stabilizing pectoral fins) to move easily through the water, swimming at just 7 km/h, they are amongst the slowest of the toothed whales.

Lastly, at the mouth of the Saguenay, minke whales and birds (gulls, kittiwakes, cormorants) congregate where the tide rips meet. Three fin whales are also near Prince Shoal Lighthouse – known in French as the “spinning top” – on June 7.

With the return of summer, the Gulf as well as the Estuary are now invaded by these great marine predators, back in their favourite feeding ground!
Click on the tail to find out which species have been seen. You can enlarge the map by clicking on the last icon of the right side.