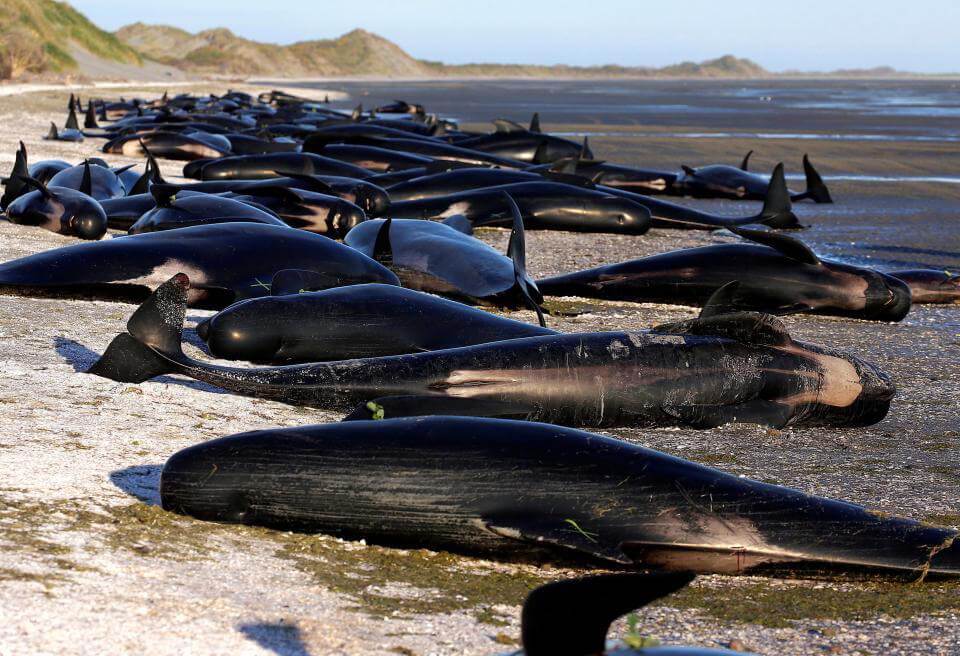 Last weekend, over 600 pilot whales ran aground at Farewell Spit Beach in New Zealand. Hundreds of volunteers attempted to save the surviving whales and return them to the water. Despite this effort of solidarity, the majority of the animals did not survive. The New Zealand Department of Conservation will attempt to identify the cause of this mass stranding. Although spectacular, this event is not unprecedented. Mass strandings occur regularly in this region and in different parts of the world, even in the St. Lawrence Estuary. What are the causes of such strandings?

In recent years, Nicholas Pyenson of the Smithsonian Institution in Washington has demonstrated that mass strandings of whales have been occurring for at least 5 to 9 million years. Pyenson and his colleagues studied a “graveyard” of fossilized marine animals found in the Atacama Desert in northern Chile. The fossils represented four distinct mass strandings of baleen whales that occurred at intervals of more than 5 million years.

Over 2,000 years ago, the Greek philosopher Aristotle was already pondering the phenomenon of mass strandings of whales. He wrote in Historia Animalium: “It is not known why they sometimes run aground on the seashore: for it is asserted that this happens rather frequently when the fancy takes them, and without any apparent reason.”

The phenomenon of mass strandings is relatively common in some species, particularly in pilot whales. Pilot whales have a very high level of social cohesion. It is therefore possible that regardless of the cause of the stranding of a group member (illness, disorientation, etc.), the entire group demonstrates its solidarity and follows this individual either to help or because it is the group leader.

The geographic and oceanographic features of an area – for example, shallow waters with a gentle slope, wide tidal range and strong currents – could make a site more conducive to strandings. According to some bioacousticians, whales may have difficulty distinguishing very gentle slopes using their echolocation system. In shallow waters with gentle slopes, repeated sound reflection between the surface and the ocean floor may mitigate the sound to such an extent that the echo would be inaudible to the whales. Agitated sand and persistent microbubbles formed by rain may exacerbate this effect.

The weather also seems to be an important factor. In 2005, researchers analyzed 82 years of data on strandings in southeastern Australia. They found that strandings peaked every 11 to 13 years and observed a correlation between these peaks and the presence of particular winds. These winds may have driven nutrient-rich waters toward the coasts, attracting whales to overly shallow areas. These winds may have also triggered storms that are believed to have disoriented the whales and caused navigation errors.

The hypothesis of magnetic disturbances has also been put forward by some researchers. Magnetic disturbances are thought to disorientate toothed whales in particular due to their echolocation system. Some repeat mass strandings are believed to occur where the Earth’s magnetic fields exhibit particularities that might throw off the whales’ internal compasses. Solar storms might also cause interference to these magnetic fields and cause mass strandings – the National Aeronautics and Space Administration (NASA) is currently testing this hypothesis.

Mass strandings are sometimes linked to a specific event, for example a toxic algal bloom, the use of sonar or an oil spill. But oftentimes, it is difficult to pinpoint a single cause. Many mass strandings are likely the result of a sequence of events, such as a navigation error by a group member followed by the tide that catches them off guard, associated with the presence of particular meteorological, geographical, oceanographic or magnetic conditions.