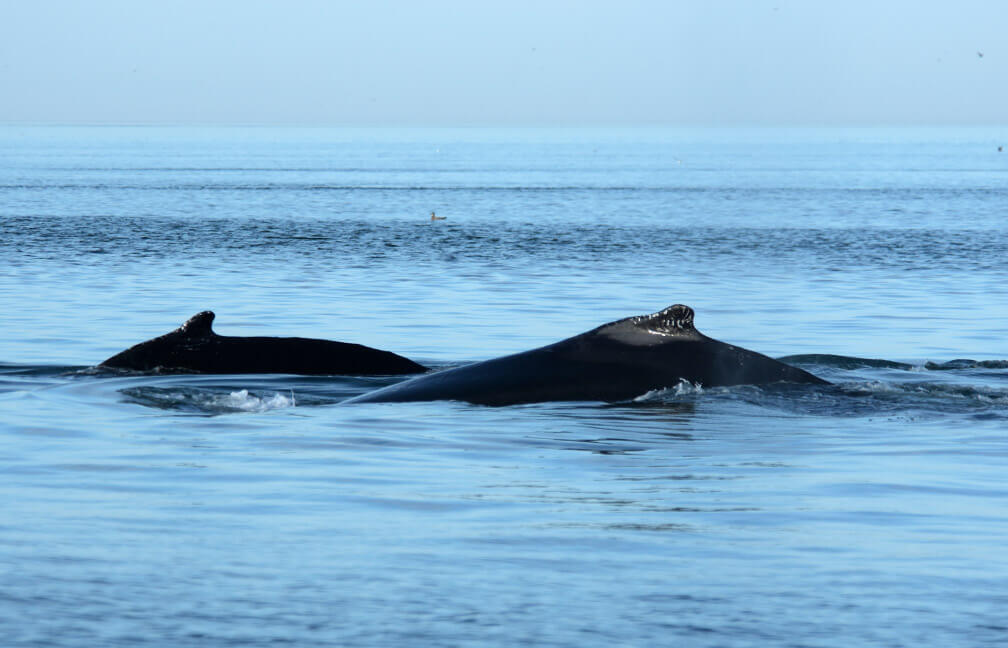 A long-time observer and former resident of Tadoussac sets out on a whale-watching cruise on September 1. The skyscape reflects off the waters of the St. Lawrence like a mirror. The boat’s captain steers the Zodiac east of Les Escoumins. A blue whale was observed here earlier. En route, cruise passengers find an abundance of harbour porpoises, minke whales, majestic fin whales and dynamic humpbacks. Then, not one, but four blue whales appear in an explosion of sound blasts. Their long, bluish-grey backs stream by. One second, two seconds, three seconds, four seconds, five seconds. Surprise: two of the individuals raise their tails before disappearing into the depths for a good fifteen minutes. Only 14 to 18% of the blue whales that frequent the St. Lawrence lift their tails when they dive. What luck to see two at the same time! An emotional observer wipes the tears from her cheeks. The St. Lawrence is teeming with life. 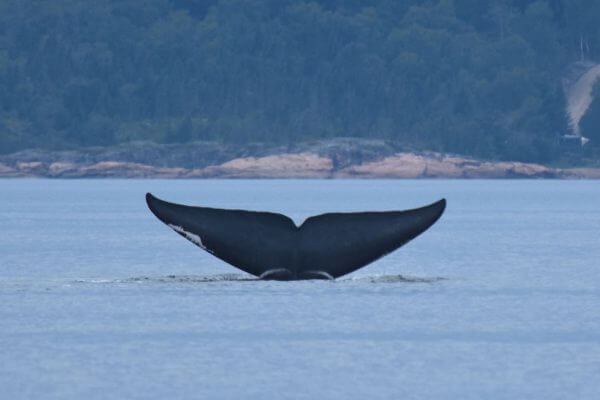 From the dunes of Tadoussac, an ornithologist tallies birds for the Tadoussac Bird Observatory. Without neglecting his primary reason for being there, he also records the presence of marine mammals. Every day, between 7 and 9 in the morning, he observes between 5 and 10 humpbacks and nearly a dozen fin whales through his spotting scope. “You can see the spouts with your naked eye, but with the scope, you can really appreciate the animals,” he notes.

On his computer screen, a research assistant for the Group for Research and Education on Marine Mammals (GREMM) compares the black and white tails of humpbacks. In the Saguenay-St. Lawrence Marine Park sector, at least 17 different humpback whales were photographed in less than a week. To put that into perspective, throughout the 2018 season (May to October), approximately twenty humpbacks were identified. With regard to fin whales, about fifteen individuals were identified in less than a week. Sometimes in groups, sometimes solo, fin whales blow tall columns skyward that can be seen from afar.

Out in the Gaspé Peninsula, blue whales continue to turn heads. Richard Sears of the Mingan Island Cetacean Study (MICS) has counted over 40 individuals in recent weeks. This abundance of blue whales seems to be related to the presence of krill, their favourite prey, which sometimes congregate in very dense concentrations. This year in the Gaspé, krill has to date been most abundant in Matane.

Surprise in the Mingan Island sector: another blue whale! The first of the season! The MICS team was able to film the animal by drone on this side of the St. Lawrence. The result is one of exquisite beauty.