Humpbacks and Belugas in the Gaspé 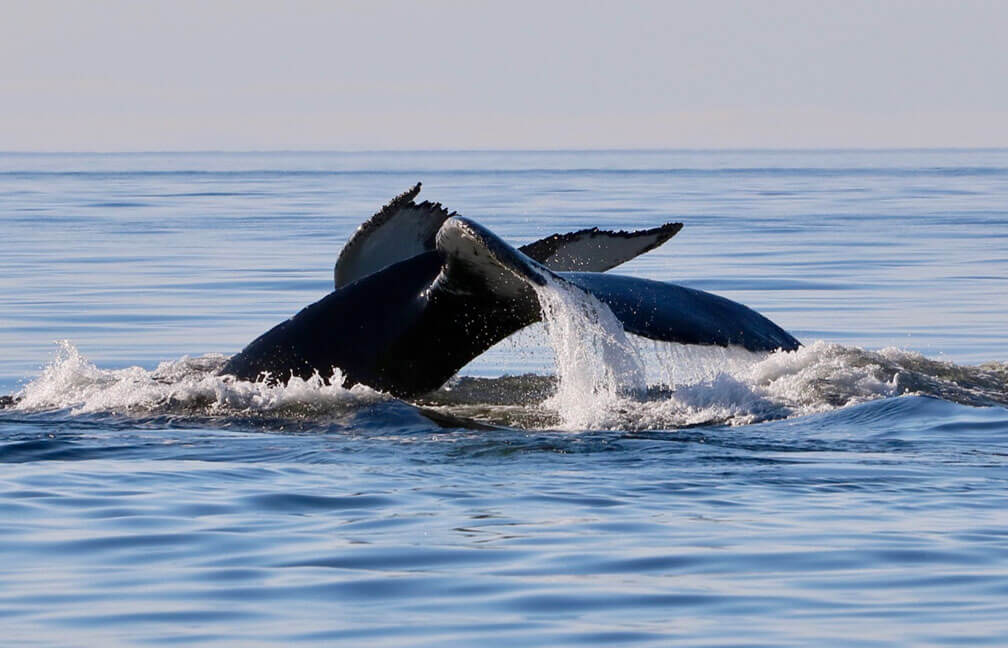 On the other end of the line, his voice cracks with excitement. Jean Roy is the owner of Gaspé-based cruise company Croisières Baie. Whales are not only his livelihood, but first and foremost his passion. So, even in winter, he walks the beaches of Forillon National Park in search of whale blasts. On March 23, he is not disappointed. “There are two humpbacks within a kilometre of the coast. I can see them quite well,” he exclaims. He admires them for about twenty minutes near the Cap-des-Rosiers lighthouse. The two whales are diving within a small radius. Perhaps they are feeding. This time of the year, a favourite prey could also be hiding beneath the waves: capelin. This fish usually arrives at the same time as the whales, which are in hot pursuit.

As soon as I hang up the phone, I contact regular observers in the village to report the sighting to them. Then, around 6:30 that evening, they’re elated! Two humpback whales appear in front of their window, probably the same individuals as those seen earlier.

On the other side of the Gaspé Peninsula, in Cap-aux-Os, an innkeeper preparing to open his establishment notices a big spout on March 23. Too bad he forgot to bring his binoculars!

In Pointe-Saint-Pierre, an observer spots her first blast of the season on March 20, not far from Île Plate. The large whale has a very small dorsal fin, does not show its tail when it dives, and has a clearly visible spout. A fin whale? Could be!

Also in the Gaspé region, fifty or so belugas stream by in a long procession opposite Cap-Chat on March 21. In winter, belugas congregate in the Gulf of St. Lawrence. Come spring, they begin their relatively short migration, sometimes skirting the Gaspé Peninsula en route to the Estuary.

As a matter of fact, belugas have already arrived there. In Saint-Irénée, fishermen set up their weirs in anticipation of the arrival of capelin. They note the passage of a small group of belugas on March 18. A few days later, the captain of a commercial vessel crosses paths with two or three belugas opposite Gros-Cap-à-l’Aigle, near La Malbaie. “It’s the first time I’ve ever seen them so early,” he says, surprised. 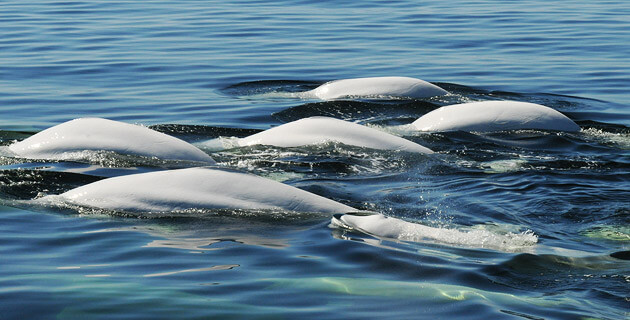 Seals out of the water

On March 22 and 23, in Penouille, harbour seals are resting on the ice by the hundreds. The ice in Gaspé Bay is still strong enough to support these marine mammals.

On March 24, eight harbour seals opt instead to dose off on the rocks in Notre-Dame-du-Portage in Quebec’s Bas-Saint-Laurent region. The observer is taken aback to see them so early. “They normally arrive in April when the ice melts, but this year it will be March, nature being how it is. There’s no ice [this year].”

Seals can rest on any number of “mattresses”: the shore, a rock, a buoy or even ice. However, predators or too much traffic on the beach may force them to remain offshore. Seals have developed the ability to remain half awake when sleeping in the water. Only when they are out of the water can they enjoy a deep slumber. Whales on the other hand always sleep only partially, resting one side of their brain at a time. This is how they are able to avoid drowning. But while humpback whales were previously believed to only sleep at the surface, video footage captured and published in a new study shows three humpbacks at full rest, sometimes up to 19 metres below the surface!

Harbour seals adopt a so-called "banana" position when resting out of the water. © Renaud Pintiaux (archives)

All of our observers also have a passion for birds. And spring is an excellent time to take advantage of migratory species that are passing through. Throughout the region, scoters and common eiders are beginning to appear.

In Les Escoumins, a birder photographs red-breasted mergansers, long-tailed ducks and Barrow’s goldeneye. During this period, the goldeneye are forming pairs and courting each other with displays that sometimes leave the drakes squabbling amongst themselves. “The Baie des Escoumins is undoubtedly the best place in Quebec to observe the species and  right now they are putting on quite a show,” says the birder. Then, farther offshore, a grey seal emerges in the midst of a raft of around fifty common eiders. 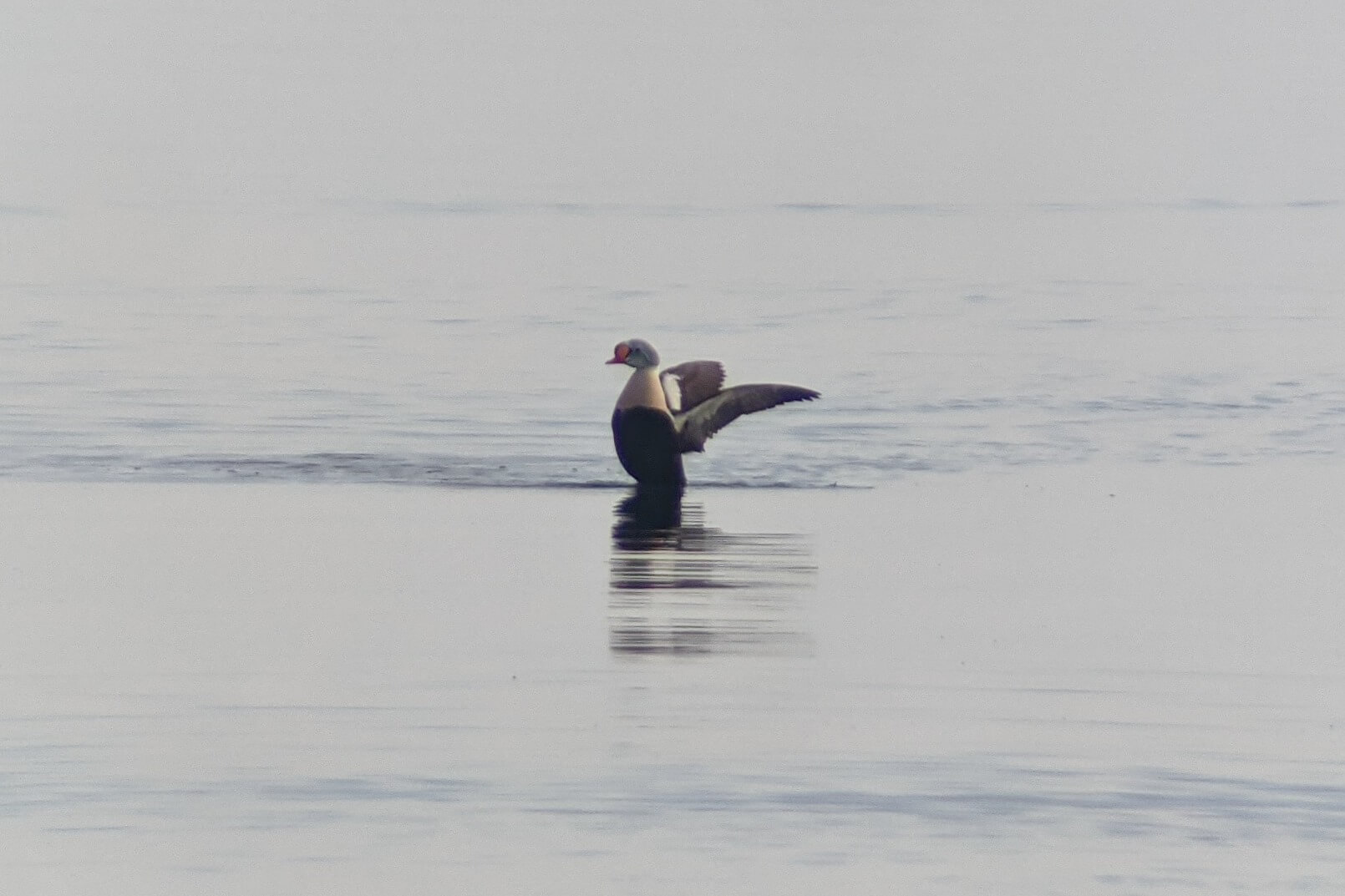 A king eider was among the common eiders in front of Les Escoumins. © David Turgeon
Observation of the Week - 25/3/2021