Humpback whales eat with their hands 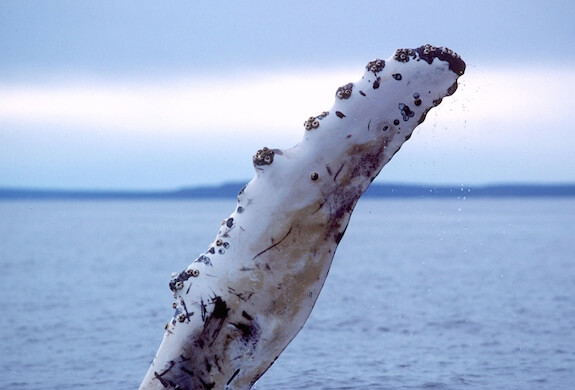 Why do humpback whales have such large fins, which can measure as much as one third the length of the animal? © GREMM

The pectoral fins of humpback whales, with their enormous size and jagged edges, are quite different from those of other species. They are believed to improve manoeuvrability and promote thermoregulation, in addition to being used for sparring and making thundering splashes in the water.

Another hypothesis (first proposed in 1930!) regarding the purpose of these large appendages has just been confirmed in a study by Madison M. Kosma and her team, published in Royal Society Open Science: Humpbacks sometimes use their fins to gather and steer prey to their gaping mouths. Combined with bubble nets, this “pectoral herding” behaviour is believed to better concentrate their prey, thereby increasing the size of each bite.

How does one demonstrate a feeding technique?

Suspected multiple times by observers and scientists, this feeding technique was finally proven using a drone and a camera attached to the end of a pole. These tools make it possible to observe the movement of fins and prey. The manoeuvres performed by the humpbacks were then analyzed using 3D software.

The images were collected on the east coast of the Gulf of Alaska, in an area where young farm-raised salmon are released. The infrastructure used by this industry – namely the metal platforms that surround the fish pens – allowed researchers to study humpbacks from shore, thereby limiting disturbance.

Akin to eating with one’s hands?

Between 2016 and 2018, researchers observed pectoral herding in two different humpbacks, which repeated the behaviour on numerous occasions.

In all cases, this technique was preceded by a bubble net, another feeding behaviour: the whales blow bubbles through their blowhole while swimming in circles, creating a circular enclosure that helps trap fish. 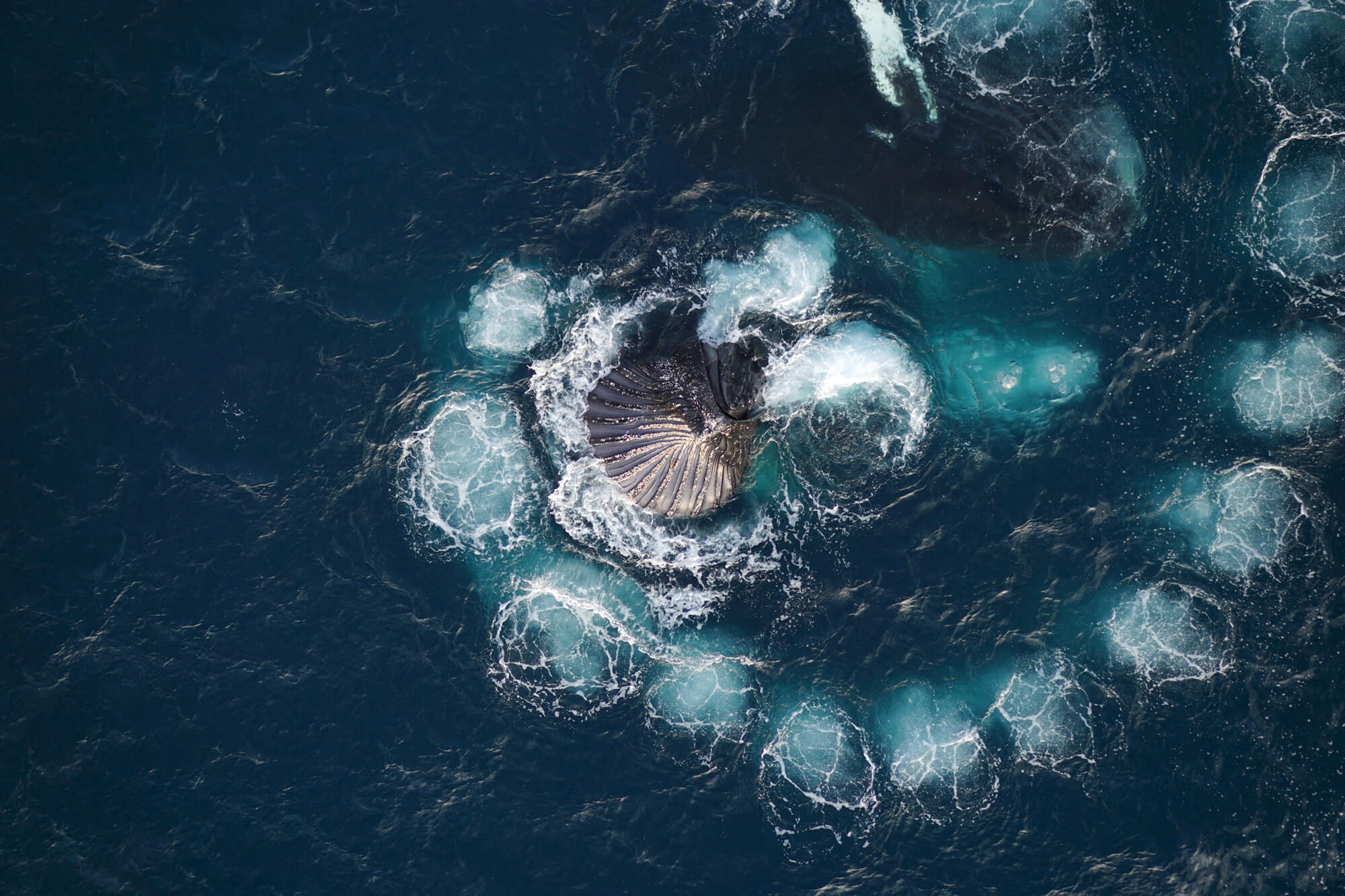 This “wall of bubbles” is not impervious, however. Indeed, the first bubbles have time to dissipate before the whale finishes its rotation, creating a gap through which the fish can escape. Additionally, some fish species, even if they are trapped, tend not to cluster in dense schools. This is the case of young salmon – the target of over 90% of pectoral herdings – which remain scattered within the bubble net. Fin usage is therefore thought to maximize the concentration of prey.

The other stages of the technique are very different from one individual to another: “Whale A” engulfs horizontally while “Whale B” engulfs vertically, which also has an impact on fin positioning.

Using ones fins as a barrier

In “Whale A”, the pectoral fins are likely used to reinforce the bubble nets. Indeed, by creating waves with its fin along the weakened section of the bubble net, the whale creates a second barrier to prevent fish from escaping. In 50% of pectoral herdings, the whale also turned its head toward the fin being used, which is believed to make prey engulfing easier. 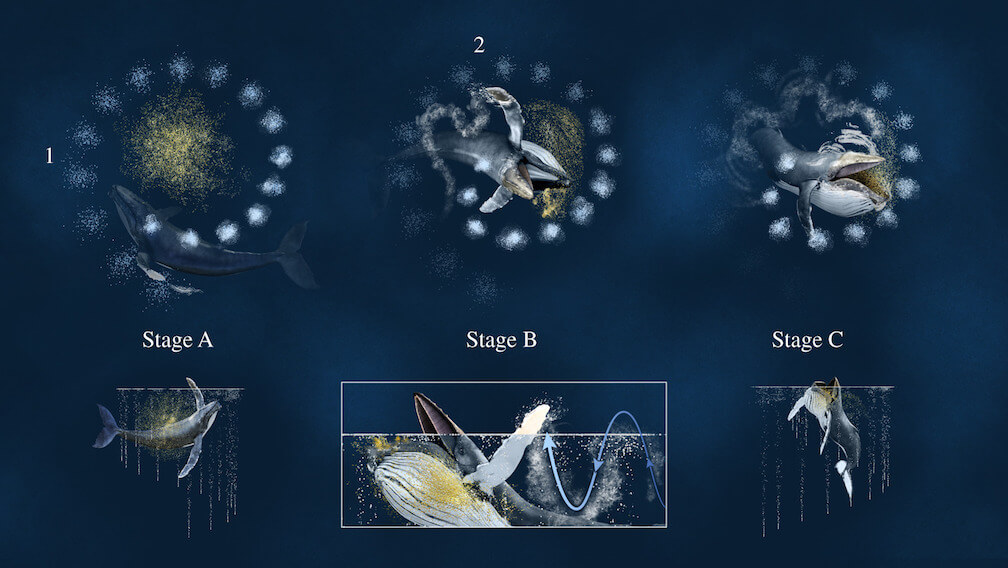 In A, the whale creates a bubble net. In B, it reinforces it by moving its left fin. Lastly, in C, it engulfs previously gathered prey. © Kosma, M.M., A.J. Werth, A.R. Szabo and J.M. Straley.

Use its fins as a decoy

In “Whale B”, which engulfs vertically, the fins are instead positioned on either side of the mouth, which probably allow the animal to push the prey in this direction. Additionally, researchers believe that the white, light-reflective colouring of the ventral side of the pectoral fins encourages fish to take refuge in the darkness of the whale’s mouth. Moreover, Whale B used vertical pectoral herding only when waters were well lit. This phenomenon of light-fleeing fish had already been demonstrated in farm-raised fish exposed to artificial humpback whale fins. 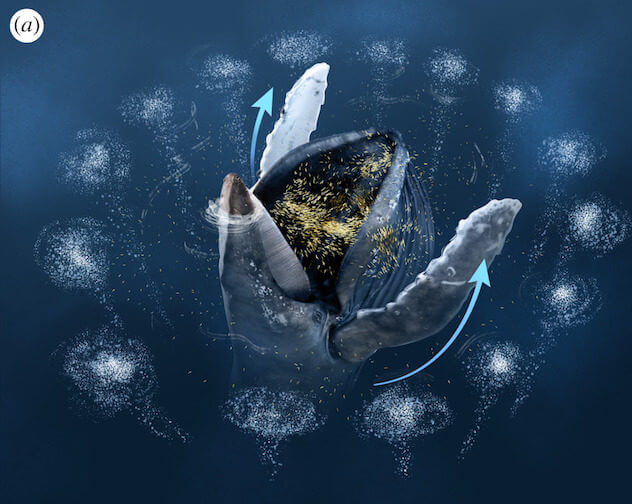 In “Whale B”, the fins are both a barrier and a deception that force prey into the animal’s wide-open mouth. © Kosma, M.M., A.J. Werth, A.R. Szabo and J.M. Straley.

In 2018, other researchers described a feeding technique that also involves the pectoral fins: the trapping technique. Like carnivorous plants, humpback whales tread water passively on the surface, mouth agape, and use their fins to guide their prey. In order to escape predation by seabirds, fish then take refuge in the mouths of humpbacks using this strategy.

But according to the Kosma study, the videos documenting the trapping technique did not clearly show that the fins were being used to push fish toward the mouth rather than as a stabilizer. That’s why this study is believed to be the first to actually prove it.