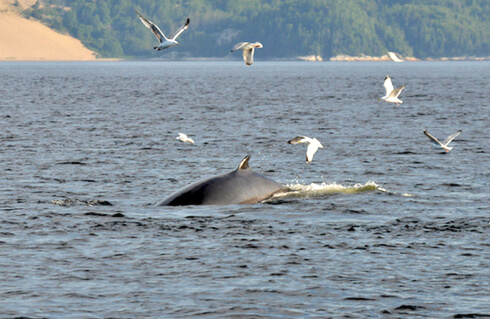 We had been waiting for this announcement for some time, namely the first irrefutable signs of spring. On the morning of April 6, a Tadoussac resident takes a stroll in the Pointe Rouge area near the mouth of the Saguenay Fjord. He notes his first whale observation of 2016: a minke whale. Is this the same individual that an experienced kayaker saw on March 18 through the ice floes near the boulders in Les Bergeronnes? Hard to say.

The day before, our observer patiently waited on the rocks of Cap de Bon-Desir, but there were no traces of marine mammals. On the other hand, birds were abundant, which is a sure sign of spring! Double-crested cormorants, brant and ring-billed gulls were flying over the waters of the Estuary. These species inarguably mark the beginning of the tourist season, explains this long-time ornithologist who has seen the arrival of many springs along the St. Lawrence. “The season has arrived!” he exclaims, visibly excited.  Interestingly, he also observed his first whale on the same date last year.

Minke whales are amongst the first species to be observed in the St. Lawrence in spring. They are also expected any day now by other observers in the North Shore and Gaspé regions. Their seasonal movements are not well known. Observations as well as acoustic recordings made by the US Navy surveillance system suggest that minke whales head south to the Caribbean region for the winter (between November and May). In spring, without ever grouping together, they travel back up the US coastline and past Bermuda to return to their summer feeding grounds. Solitary and coastal in nature, minke whales are observed travelling or feeding along the shoreline, in tide rips or farther offshore. This is the most fish-eating of whales: its preferred prey are capelin, herring and sand lances, small fish that form dense schools.

The GREMM team, based at the Marine Mammal Interpretation Centre in Tadoussac, had been awaiting the return of beluga whales in the Saguenay Fjord. “It’s usually around this time that the first observations have been made in the past,” recalled the CIMM director on Thursday, April 7. A few hours later, he announced the presence of a group of three belugas – two adults and one juvenile – swimming down the Saguenay!

The report from the Gaspésie is equally exciting: a longtime naturalist told us, “My parents spotted their first large whale in the Gaspé Bay from their home on Monday, April 4, opposite the village of Cap-aux-Os, near the entrance to Forillon National Park. They observed a spout and they saw the back several times, but no tail. Fin whale? Blue whale? Perhaps we’ll have the answer in the next few days.