Godbout is where the action is! 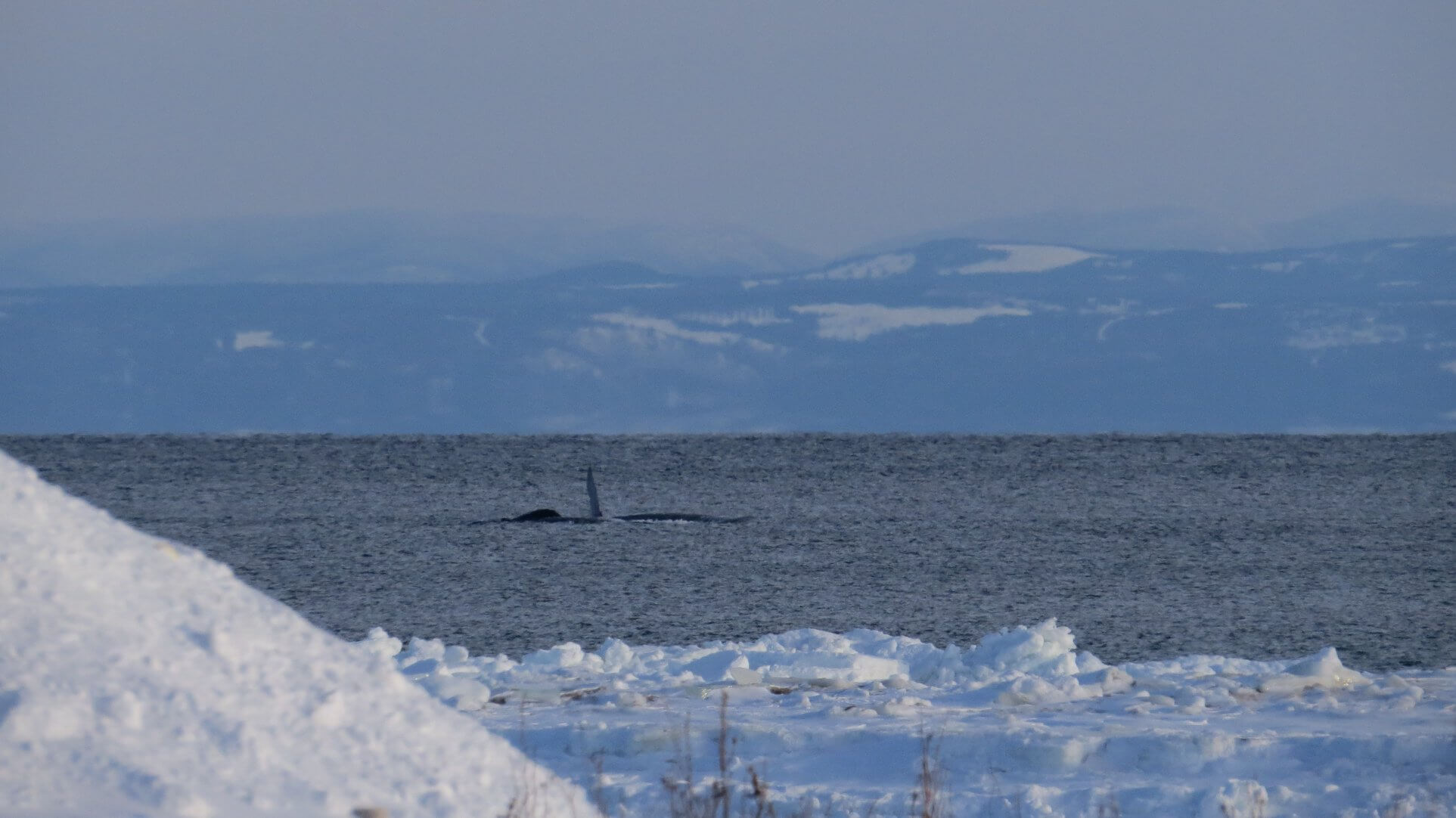 A tiny village of just over 300 inhabitants, Godbout is located in the Côte-Nord (North Shore) region between Baie-Comeau and Baie-Trinité. This municipality is best known for its ferry that connects it to Matane. But Godbout is also a village where whales are observed year-round.

On the afternoon of February 10, one observer noted two giant spouts rising between the waves. Despite the strong winds and the white wave crests, he manages to get a snapshot of two large rorquals. However, with just photos to go by, it’s difficult to confirm whether they are fin or blue whales. Subtle shades may vary depending on the brightness and the photo equipment. Yet the observer thinks he saw blue whales.

On February 12, another observer also photographed two individuals quite close to shore… an incredible stroke of luck! One can see the open mouth and a short pectoral fin sticking straight up in the air. Once again, it’s difficult to confirm whether it’s a fin whale or a blue whale based on the photos. These two species, the two longest members of the rorqual family, have a similar body shape and employ similar feeding techniques. It takes very clear and crisp photos to confirm the species with certainty.

But let’s go back to this fantastic sighting of two whales near the snowy coast. When we see the pectoral fins emerge from the waves, we say the individual is “lunge feeding”. The animal turns onto its side, accelerates and opens its mouth while water gushes in and causes its ventral pouch to expand. Then, it closes its jaw and expels the water through its baleen. The whale’s prey is then pushed back toward the throat by the tongue and swallowed. Blue whales sometimes turn completely over themselves when feeding. Such pirouettes are believed to help anticipate the trajectory of the krill in order for the animal to open its mouth at the most effective angle and take the biggest gulp.

The observations compiled in this chronicle provide merely a glimpse of the presence of marine mammals in the St. Lawrence. Sometimes you need to turn your eyes to the horizon at just the right moment to notice the elusive passage of a wild animal, a seal head coming to the surface to breathe or a whale on the move in search of a school of fish.

In Port-Cartier, a raft of hundreds of common eiders forms a brownish patch on the water. Common eiders measure between 58 and 68 cm. When flocked together, females sometimes emit guttural sounds that resemble a low nasal growl.

An observer from Sainte-Flavieattends the waltz of the ice floes drifting with the tides. “Between two and thirty kilometres of ice hit the shore and head back out to the open sea,” he explains. In Tourelle, not far from Sainte-Anne-des-Monts, it’s white as far as the eye can see. On the other side of the river, in Tadoussac, observers are treated to nothing more than a ballet of ice. But those who manage to lift their heads at the right time can catch sight of the long gliding flight of a bald eagle.