During the end-of year holiday season, the waters of the St. Lawrence quietly became cloaked in a sheet of ice and snow. Days and evenings were filled with family visits, sledding and skiing, but that didn’t prevent a few nature lovers from venturing to the banks of the river to observe marine mammals.

Large rorquals to cap off 2022

In Percé, it was quite a surprise for an experienced observer when she spotted a group of 7 fin and humpback whales offshore in the final days of the year. Fin whales typically migrate to the lower latitudes of the North Atlantic to spend the winter. However, their exact migration patterns are poorly understood. As for humpbacks, they migrate to the Caribbean and travel 5,500 km to reach their breeding grounds. Throughout the season, they live on their fat reserves with little or no food. One of the advantages of wintering in a warmer region is that the whales’ offspring are able to build up their fat reserves (which act as an insulator) before they return north to chillier waters! Individuals that remain all winter in the Gulf of St. Lawrence most likely continue to feed. 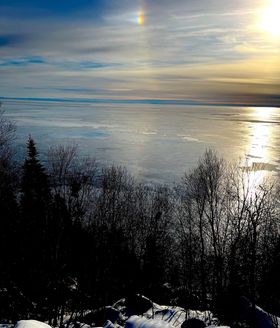 The St. Lawrence River as seen from Franquelin © Pascal Pitre

Near Franquelin, a minke whale was seen swimming near the shore just before the holidays, but since then, the ice has taken hold and the whales can no longer come so close to the coast. In the Tadoussac area, a few belugas were reported from Pointe de l’Islet, while at Cap de Bon-Désir in Les Bergeronnes, the white backs of belugas and a few heads of harp seals were observed.

On January 9, the presence of a pinniped on the north shore of the St. Lawrence came as a surprise for one marine mammal enthusiast: “I enjoyed an interesting sighting today in Gallix and I’m elated! You know, when you’re in the right place at the right time… I had taken the path leading to the town beach and as I was scanning the horizon, I noticed some movement to my right. Much to my surprise, just 20 feet in front of me, I saw a magnificent harp seal lazing on the beach!” In Portneuf-sur-Mer, another harp seal was also observed on shore. 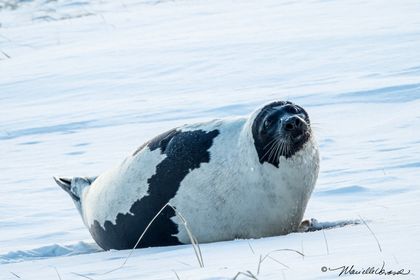 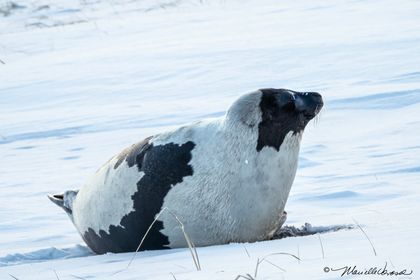