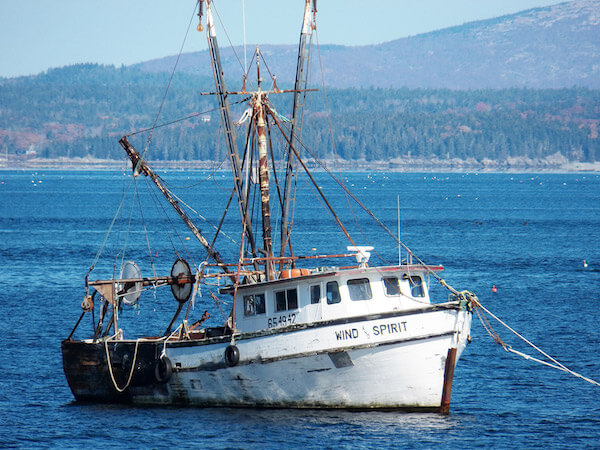 The snow crab season is underway, which is synonymous with the start of the “crab dinner” season. For some, this is THE sign of spring.

In the early morning hours of March 29, before first light even, our Franquelin-based collaborator gazes offshore and makes out not a whale spout, but rather the silhouettes of crabbers making their first run of the year. They set out from Portneuf-sur-Mer, Les Escoumins, Rimouski and Matane to patrol Area 17 between Tadoussac and Pointe-des-Monts in the Côte-Nord region and as far as Saint-Anne-des-Monts in the Gaspé Peninsula. Unlike other fishing areas on the North Shore where quotas are down this year, Area 17 is marked by a 25% increase in harvest limits, as crab is abundant and is reaching maturity. Fishing periods and quotas vary by zone based on analysis by Fisheries and Oceans Canada scientists of the health of the various stocks. As the world’s largest producer of snow crab, Canada harvests two-thirds of the global supply.

The cold and ice are inescapable when it comes to fishing in the St. Lawrence in April. For example, captains work with wind chill tables: if it is too cold, crabs “lose” their legs when they are pulled from the water! Moreover, ice movement and potential storms keep them on the alert.

Crab fishermen are not the only ones kicking off their season. The shrimp season gets underway in April and, since last week, fishermen from Tadoussac have been on the hunt for sea urchin, a seafood delicacy in the US and Asia. Like berry pickers, the fishermen dive down to the seabed to gather “clusters” of sea urchins grazing on the plentiful algae at the edge of the tidal flats near the entrance to the Saguenay Fjord. Back on the boat, the crew waits for the divers to return and scans the waters in search of the sparkling backs of belugas or the large spout of a whale.

These fishermen have the best seats in the house when it comes to watching whales. Over the years, they’ve told us many a story: blue whales feasting right off the boat, a killer whale approaching a shrimp vessel and more! What will they tell us this year? We look forward to their stories.

Last week, a collaborator from Rivière-au-Renard reported a rumour of two humpback whales in Gaspé Bay on March 22. The rumour is no more: an innkeeper and longtime Whales Online collaborator from Cap-aux-Os confirms that he saw these two whales two days last week. Then, at the very moment these lines are being written, the observer from Rivière-au-Renard called to inform us that he was watching his first whales of 2017: two fin whales about three kilometres off the coast.