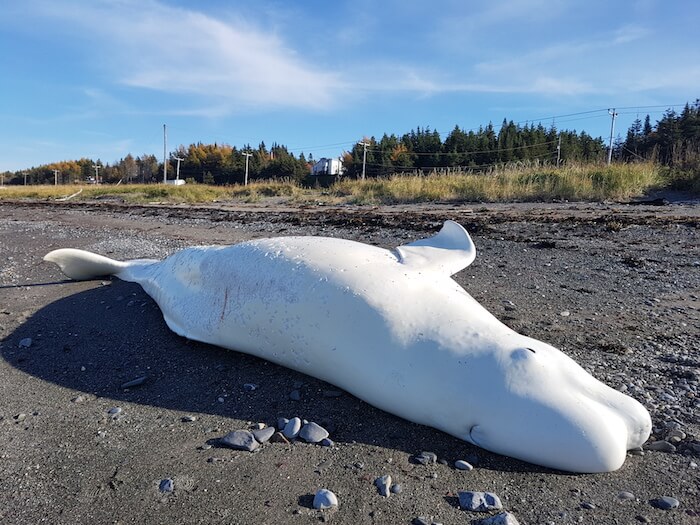 The Matane unit of Sureté du Québec contacted 1-877-7baleine after a resident stopped by the station to report a live stranded beluga on the shores in Saint-Ulric. At the same time, a cyclist was passing by and reported a large white carcass. Confirmation made: an adult beluga carcass, pure white, had washed up on the sand with the morning tide.

Scarcely touched by scavengers, not at all decomposed, the stranded and accessible female quickly proved to be the perfect candidate for a necropsy. In the hours to come, veterinarians from the Faculty of Veterinary Medicine (FMV) of the Université de Montréal would conduct a comprehensive study of the carcass in the lab, after which explanations on the causes of mortality will be formulated.

Within an hour, a municipal inspector brought the necessary equipment to secure the carcass so that it would not be carried away with the tide. Shortly thereafter, a veteran Marine Mammal Emergencies volunteer came to the site to take complete measurements of the animal and snap a few photos.

The 3.87 m long female bore no external markings or obvious signs suggesting a cause of death. She seemed a little emaciated, however, judging by the hollows along her vertebral column. A whitish liquid was also coming out of her protruding teats. For the time being it is impossible to say what this beluga died from or if it was a female who had recently given birth. Whatever the case, Stéphane Lair and his team will make their observations in their preliminary report once they have completed the necropsy.

This is the 21st beluga carcass studied this year in the St. Lawrence, and the sixth one to be transported to the FMV. 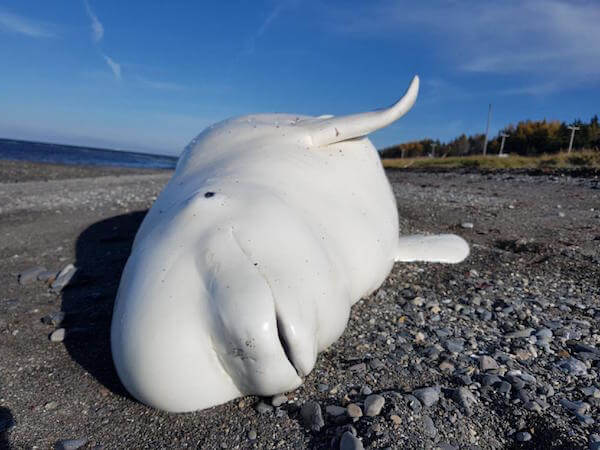 The beluga female was transported for necropsy. This is the 21st carcass was studied this year. © David Michaud
Marine Mammal Emergencies - 24/10/2017