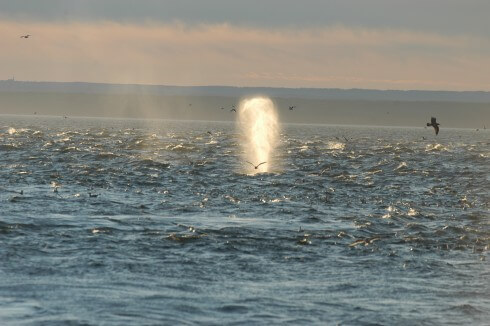 Sunny skies and rising temperatures are bringing joy and marking the return of the whales! On March 23, in the Sept-Îles area, Jacques Gélineau, a collaborator from INREST, spotted three large spouts. One of them was that of a blue whale. Its column-like shape and the proximity of the animal made it possible to recognize the species. The identity of the other two animals remains unknown. The following day, off Pointe-aux-Anglais, Mr. Gélineau reported the presence of another blue whale 5 nautical miles off the coast. The sea has freed itself of ice and the giants are quietly returning to their favourite areas to begin their hunting season.

In fact, the crab season in the Estuary began this week as well. At 5 in the morning on March 27, fishermen in Zone 17 – which extends from Pointe-des-Monts to Les Escoumins, and from Trois-Pistoles to Rivière-à-Claude, in Haute-Gaspésie – embark on their first journey in hopes of returning with a precious “harvest”. Our Franquelin collaborator has the perfect vantage point to admire the silhouettes of crabbers at sea … not to mention those of whales and seals. However, this week she saw just a single harp seal near shore.

Lastly, a collaborator in the Gaspé Peninsula is spreading rumours of large distant spouts that he observed off Cap-aux-Os in Gaspé Bay on March 25. Hopefully these sightings will be confirmed soon!