First beluga carcass of the year reported in gaspésie 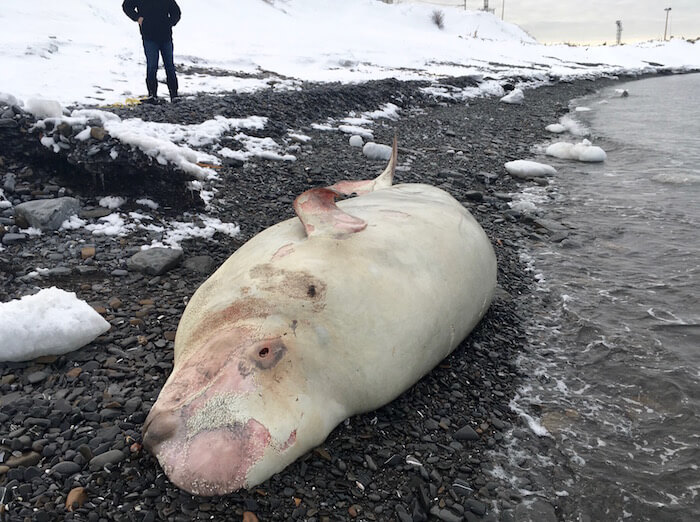 The first beluga carcass of the year was reported to Marine Mammals Emergencies. A resident of the Gaspé Peninsula town of L’Anse-à-Valleau phoned 1-877-7baleine late in the day on March 29. Last December, the same observer had also found a minke whale carcass.

“Unstriped, cream-coloured belly, pointed beak, 3-4 m long”: this was the description that the Marine Mammal Emergencies call centre had to work with to determine the species of cetacean in question. The photos received confirmed that it was an adult male beluga, a species rarely seen in the waters of the Gaspé Peninsula.

Oftentimes, belugas found on shore in spring are already in an advanced state of decomposition, suggesting that they died in late fall or winter. The fact that they spent months in the snow and ice keeps them intact and slows down the decomposition process. The one in L’Anse-à-Valleau is therefore intact and white, but its missing eyes and the appearance of its skin, hard and reddened in places, suggests that it is not a candidate for a complete necropsy (in French), since its organs are probably putrefied.

A carcass for science

Since 1982, Fisheries and Oceans Canada, Parks Canada and other organizations such as the St. Lawrence National Institute of Ecotoxicology (INESL), Filmar Industries, Université de Montréal’s faculty of veterinary medicine (FMV) and the Group for Research and Education on Marine Mammals (GREMM) have participated in a monitoring program to track beluga mortalities in the the St. Lawrence Estuary. Objective: to determine the cause of death of the stranded animals using pathological methods and veterinary diagnoses. 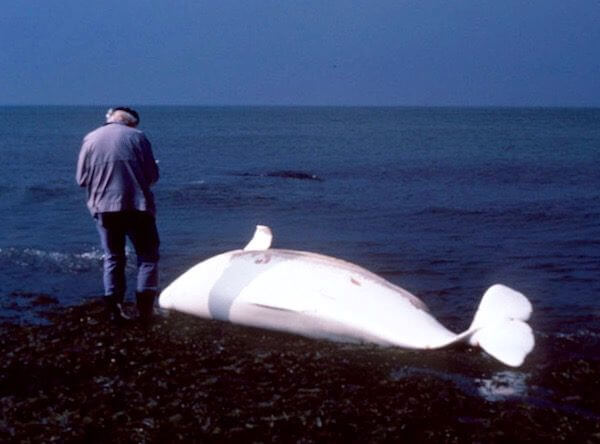 This program was initiated by FMV veterinarian Daniel Martineau. That year, while attending a beluga conference at the Université du Québec à Rimouski, a dead beluga was found beached on the shore of Pointe-au-Père. Accompanied by David Sergeant and Pierre Béland, Daniel Martineau saw for the very first time a beluga that was completely intact. The animal showed no signs of injury, notwithstanding scratches caused by gravel and seabirds. What did the beluga die from? For Mr. Martineau, there was only one way to know: an in-depth examination had to be performed. This event was the spark that initiated the vast carcass recovery and post-mortem examination program.

Today FMV’s Stéphane Lair is leading the St. Lawrence beluga health monitoring program. Stranded carcasses that are still in good condition are brought to Université de Montréal’s campus in Saint-Hyacinthe for a comprehensive examination. No stone is left unturned: organs are analyzed for diseases or abnormalities, genetic analyses are conducted, and the age (in French) of the subjects is determined by counting the growth rings in the teeth.

If the carcass is too altered, as was the case for the L’Anse-à-Valleau beluga, a sampling specialist will go to the site to collect skin, fat and muscle samples as well as a portion of the lower jaw, which he or she will bring back to the lab for further analysis. The L’Anse-à-Valleau carcass will be sampled on Friday, April 1.

A beluga in the Gaspé?

Belugas are generally observed in the St. Lawrence Estuary and the Saguenay Fjord during the summer months. According to knowledge acquired to date by scientists, belugas are believed to migrate to the Gulf of St. Lawrence in late fall to spend the winter. Where exactly? The question remains unanswered. Data recorded in the 1940s as well as data obtained through aerial surveys performed in the early 1990s have provided some information on the presence of belugas in the Gulf of St. Lawrence, including off the coasts of the Côte-Nord and Gaspé regions, though information remains scarce and sporadic. The GREMM team attempted to learn more about where belugas spend the winter by placing satellite transmitters on the backs of a few individuals last fall. The results were not as conclusive as had been hoped. Where belugas roam when they’re far from the eyes of researchers is still largely a mystery.

Observer data collected at the GREMM nevertheless reveal beluga sightings in the Gaspé region throughout the summer. Two sightings were recorded in 2013: one off La Marte and the other from Percé. More recently, a beluga was reported off Port-Daniel in May and then in Sainte-Anne-des-Monts in July 2015. Chandler residents will remember that was found on August 13, 2015.

At the Quebec Marine Mammal Emergency Response Network, between 15 and 20 beluga carcasses are reported every year in the St. Lawrence River. The first reports of dead belugas are generally received in April and May, though in 2010 the Network was notified of a dead beached beluga as early as March 9. 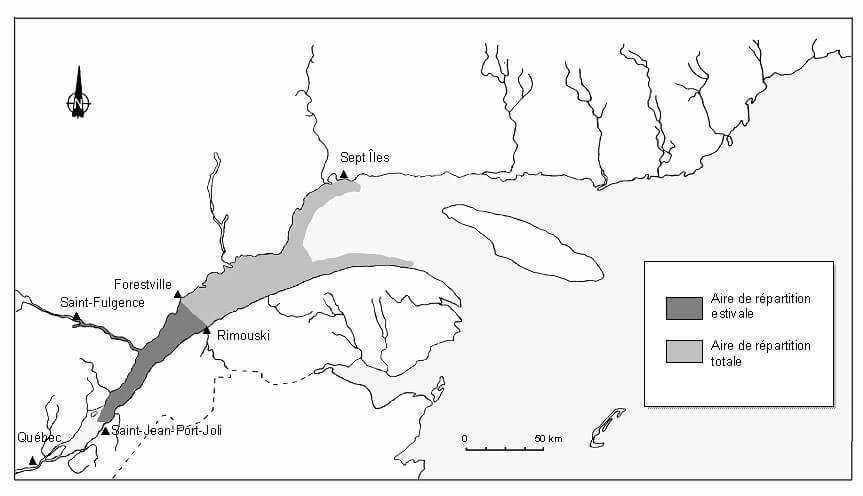