Fins on the Horizon!

Although whales were scarce in the Bonaventure Island sector last July, this year they have been plentiful. “We’re spoiled,” says one naturalist. The humpbacks are generous with their aerial acrobatics.” Early in the morning of July 1, she observes a humpback mother breaching near her calf. The next day, a humpback slaps its pectoral fins repeatedly and nonchalantly, so much that the naturalist describes them as “chopsticks in the air”. That afternoon, another individual pulls out all the stops: “It breaches repeatedly, lies on its back, belly in the air and seems to applaud with its two pectoral fins. It kept rolling over itself, again and again! All this with a breathtaking, scenic backdrop: high cliffs, Percé Rock, Bonaventure Island and its gannets, Forillon, Île Plate and sailboats.”

Up to five blue whales are tallied off the Gaspé Peninsula. The long, bluish-grey back of an individual is arched and the caudal fin – i.e. the tail – is lifted into the air. In the western North Atlantic and eastern North Pacific, between 14 and 18% of individuals raise their tails every time or almost every time they dive. Elsewhere in the world, these percentages vary. It is not known why some individuals show their tail and others do not. 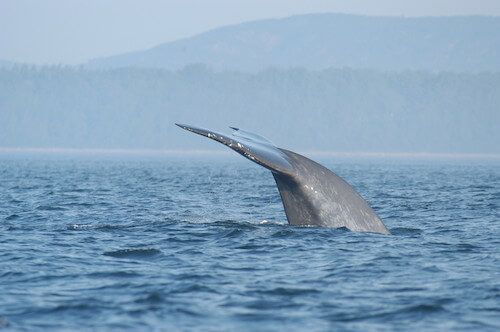 A blue whale raises its tail while diving. © GREMM

In Gaspé Bay, multiple species of whales “rub fins”: harbour porpoises, minke whales, humpbacks, fin whales and blue whales. “On the echo sounder we can see that there is an impressive concentration of food at any given level of the water column,” says one cruise employee. It’s no wonder then that these individuals are being seen in such tight clusters.

On the other side of the St. Lawrence, near Longue-Pointe-de-Mingan, the trips made by the Mingan Island Research Station fail to identify many large rorquals.

Farther upstream, in Pointe-des-Monts, a local resident notes a few spouts offshore on June 28. He sets up his telescope and counts five humpbacks swimming side by side. One of the animals is smaller and is swimming very close to another, much larger individual. Is it a mother-calf pair? A few days earlier off the coast of Sept-Îles, another duo is observed. It might be the same one… or not!

On July 1, at dusk, an observer in Les Escoumins is surprised to see several harbour porpoises just off Rue des Pilotes. “It looked as if they were partying,” she remarks, referring to their dynamic swimming at the surface. The evening wears on… it is now nearly dark, and calls are rising out the water. The white silhouettes betray the presence of the belugas vocalizing at the surface. While blue whale calls are not audible to humans, some of those produced by belugas sound like a symphony of clicks, squeaks and squeals to our ears. 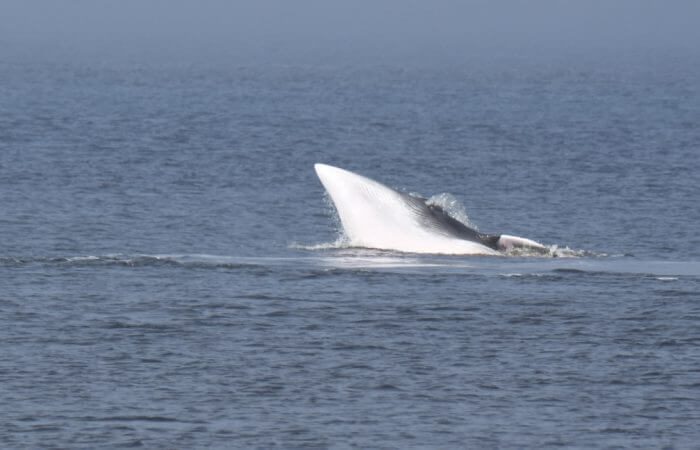 A minke whale lunges out of the water in front of the Marine Mammal Interpretation Center. We can see the white patch on its pectoral fin, a distinctive trait of minke whales. © GREMM

In Tadoussac, in front of the Marine Mammal Interpretation Centre, naturalists have been observing a minke whale practically every day. Is it the same individual each time? A research assistant took a few pictures in hopes of identifying the animal. It, too, often shows its fins, much to the delight of visitors!