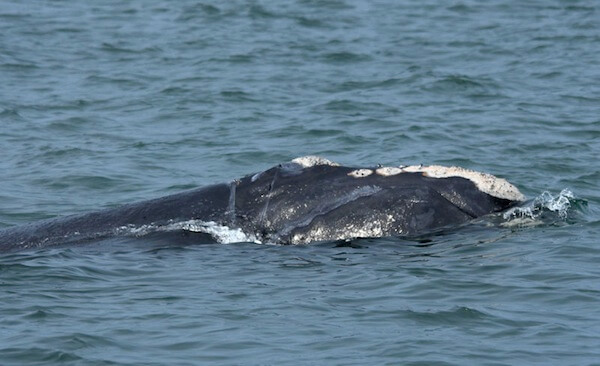 To ensure the survival of the North Atlantic right whale, should we mitigate the risk of entanglements with fishing equipment? This is what is being suggested by researchers from the Canadian Wildlife Federation, WWF-Canada and Dalhousie University in a recently published study in Marine Policy. Based on the results of this study, closing two New Brunswick-Nova Scotia fishing areas in summer would substantially reduce the risk of right whales getting caught up in fishing gear in Canadian waters and could help stave off the extirpation of this population. This measure could also allow Canada to meet new US requirements for importing seafood and protecting marine mammals while minimizing the economic repercussions for fishermen. Nevertheless, a few observations make fishermen rather sceptical about this solution…

Fishing gear: enemy number one of the right whale

The conservation of the North Atlantic right whale “is not yet a success,” concludes a study published in August 2016 in Frontiers in Marine Science. Despite significant efforts to reduce the number of right whales that injure themselves or die in fishing gear – including changes to the equipment itself – incidental catches have been increasing in both number and severity. Between 2010 and 2015, 85% of mortalities were attributed to bycatch. Current regulatory measures seem to be ineffective in reducing this leading cause of mortality and injury.

In the study published a few weeks ago in Marine Policy, Sean Brillant and his colleagues propose a solution to protect right whales: reduce the risk of them getting snagged in fishing gear. According to these researchers, reducing this risk by at least 30% would prevent the death of at least two right whales every three years and prevent up to 32 cases of bycatch a year, which could spell the difference between the recovery of the population and its extirpation.

Researchers calculated the risk of bycatch for each month of the year in different zones of the Northwest Atlantic (subdivided into more than 76,000 areas measuring 0.05° latitude by 0.05° longitude) using 30 years of right whale distribution data (1978 to 2007) and thirteen years of data on the presence of fishing gear (1999 to 2012). The results show that the risk of run-ins with fishing gear occurs almost exclusively during the months of July, August and September and that one-third of the annual risk of entanglement is associated with two sectors: the Grand Manan Basin and the Roseway Basin. Researchers believe that banning commercial fishing in these basins in summer would reduce the risk of whales injuring themselves with fishing gear by 30%.

Estimates of commercial catches in these basins (groundfish, crab, lobster and others) are low and declining. According to Sean Brillant, this would thus be the simplest and least costly way for fishermen to meet new US requirements for seafood imports. Within five years, fisheries wishing to export to the US will have to demonstrate that they protect marine mammals to standards comparable to those governing US fisheries.

Some fishermen remain unconvinced regarding the solution proposed by Sean Brillant and his fellow researchers. Bonnie Morse, of the Grand Manan Fishermen’s Association, points out that whales have shifted their summer feeding areas in recent years and that surveys should be conducted before prohibiting fishing in areas that whales may no longer frequent.

As mentioned in our article last week, in the past five years, fewer right whales have been observed in summer in their traditional feeding grounds between New England and Nova Scotia, but sightings of this species have been on the rise in the Gulf of St. Lawrence and its Estuary. If these observations reflect changes in the right whale’s feeding areas, will the bycatch risk analysis and proposed protection measures need to be updated on a regular basis? If the uptick in right whale sightings in the St. Lawrence reflects an increase in the number of whales in this area, should protection measures such as closing certain parts of the fishery in the summer also be considered in the St. Lawrence? Many questions must be answered before such measures are implemented in the Gulf and the Estuary, but in the meantime, greater vigilance by captains and fishermen in the St. Lawrence is critical.