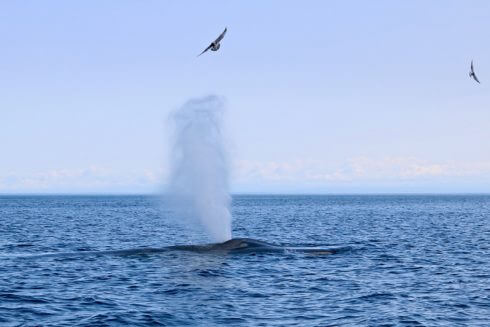 It was a perfect day for whale-watching. Light winds, calm sea, light conditions that were neither blinding nor too dim. Off the coast of Gallix, a spout rises high and straight, followed by a long, dark, smooth back. At the end there is a small dorsal fin. The following day, our observer once again spots a giant swimming offshore, but this time it is much closer, about two nautical miles (approx. 3.7 km) from the coast. It is identifiable: it’s a blue whale! “It’s swimming slowly, much slower than I usually observe in summer,” he notes.

But what is a large rorqual doing in the St. Lawrence in the middle of winter? “Shouldn’t it be down south or out at sea for the breeding season?” asks one reader.

It’s a good question. It’s difficult to say why some whales migrate and others linger or do not migrate at all. The different species of cetaceans that visit the St. Lawrence on a seasonal basis do so for food. According to a study conducted by Fisheries and Oceans Canada in the vicinity of Les Escoumins, krill – blue whales’ favourite prey – remain in high concentrations during the winter. However, in this same study, a strong correlation is observed between the arrival of ice and the departure of whales from the study area. There is therefore an “obligation” to leave an area that becomes potentially dangerous – no whale wants to find itself trapped in the ice. When the ice cover is sufficiently scattered, individuals can return to the area to feed.

Migration may also be related to the need to reproduce. For example, humpback whales frequenting the St. Lawrence gather in the Caribbean in winter. Are the individuals that remain in our waters non-breeders? Maybe.

One GREMM naturalist vacationing in Guadeloupe is eagerly awaiting the arrival of humpbacks. A few brief observations have been made off the island, so she is optimistically keeping her eyes on the water.

In the Pacific, a humpback born just a few hours earlier off the coast of Maui was filmed by a research group at the University of Hawaii. In the video, one can see blood coming out of the mother’s vagina and the latter helping her offspring to the surface to breathe. Thanks to this video, one can appreciate the difference in size between the two individuals, the dorsal and caudal fins that still look “soft” and the difference in colour.

Let’s go back to Quebec now. At the Cap-des-Rosiers lighthouse, a variety of seabirds are observed. Long-tailed ducks, common eiders, red-breasted mergansers and common goldeneye take advantage of the calm waters. Our observer is hopeful that he might spot the head of a seal or a large spout, but to no avail. But did you take notice? The days are getting longer. We’ll have a little extra time to observe life on the St. Lawrence.