Jonathan Wilkinson, Minister of Fisheries, Oceans and the Canadian Coast Guard, Sean Fraser, Parliamentary Secretary to Minister to Environment and Climate Change and Marc Garneau, Minister of Transport, announced a list of measures to further protect the species, along with an allocation of $61.4 million for their implementation.

What Are Southern Resident Killer Whales?

Like their northern-counterparts, SRKWs eat fish—with Chinook salmon making up more than 85% of the SRKWs’ diet. First impacted by the loss of at least 46 animals from the live capture fishery between 1964 and 1973, the SRKWs are now struggling due to reduced prey availability and other anthropogenic threats. As a result, this population is down to only 74 individuals as of September 2018 with the passing of J-50 ‘Scarlet’. 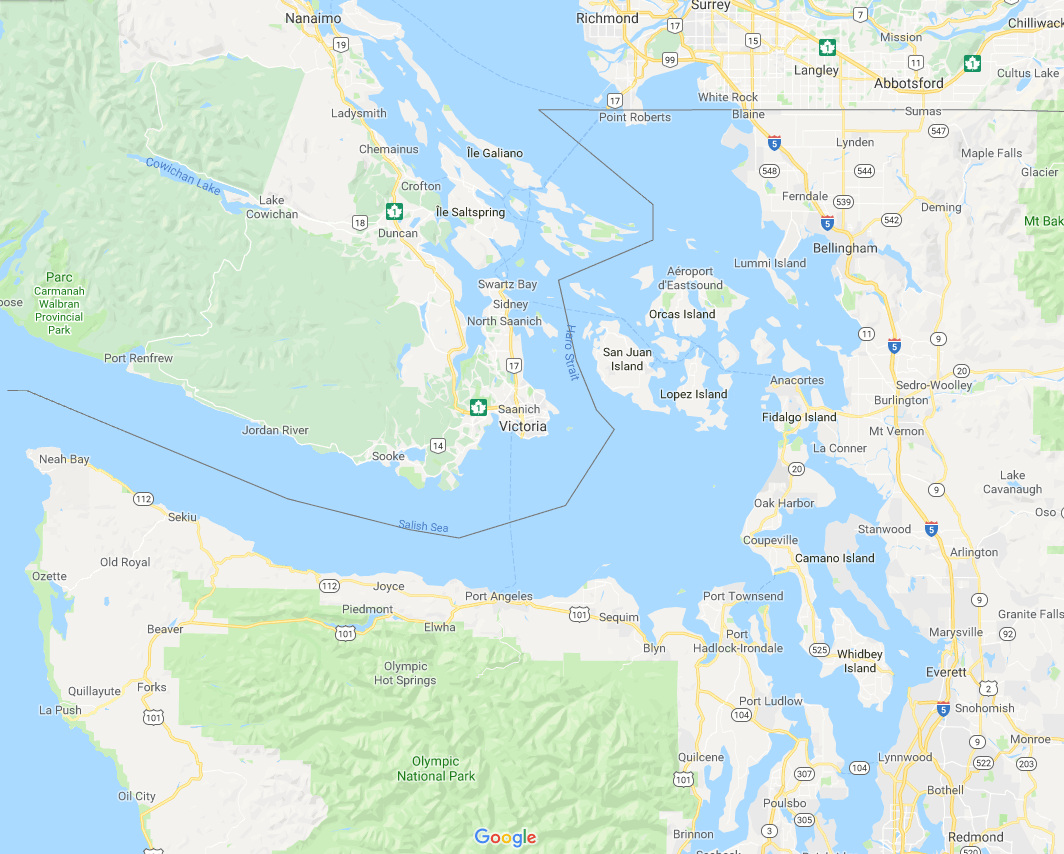 Salish Sea is a critical habitat for the SRKWs. It mainly comprises of Strait of Juan de Fuca, Haro Strait, Strait of Georgia, and Puget Sound, making the protection and recovery of SRKWs a joint effort and responsibility between Canada and the United States of America. © Google Maps

“By increasing access to food, reducing vessel noise and addressing key contaminants of concern, the Government of Canada is taking action to protect and to enable recovery of the Southern Resident Killer Whale,” says Jonathan Wilkinson in a press release.

Measures include identifying and protecting new areas in the Salish Sea, providing funding to Ocean Wise Research program for their WhaleReport Alert System to alert larger vessels of the presence of whales in the area, and advancing feasibility work on the SRKW sanctuaries in the Salish Sea. Additional efforts include protection and recovery of Chinook salmon stocks. The government also hopes to reduce underwater noise by expanding current vessel slowdowns, formalizing existing voluntary measures, and developing and implementing the Noise Management Plans. Major investments will also be made towards enhancing regulatory control over five organic pollutants that affect the SRKWs.

What has been done?

Prior to this, the Government of Canada had first announced Canada’s Oceans Protection Plan (OPP) in November 2016 addressing threats to three at-risk whale species in Canada: the Southern Resident Killer Whales, the North Atlantic Right Whale, and the St. Lawrence Estuary Beluga. Adding to that, the government has introduced a $167 million “Whales Initiative” as part of Budget 2018. This initiative also adds increased aerial surveillance and enforcement on the water.

Though these new measures have been much anticipated, the Government of Canada had contradictorily purchased the existing Kinder Morgan pipeline in May this year and planned for the Trans Mountain pipeline expansion. This added another possible threat to the survival of the SRKWs. Soon after, Ecojustice fought a successful case against the Government of Canada. On August 30, 2018, the Federal Court found that the government’s approval of the project did not comply with Canadian law and conflicted with its responsibility under the Species-At-Risk-Act to protect the SRKWs.

In an announcement made on October 3, 2018, the Federal government chose not to appeal the court ruling.