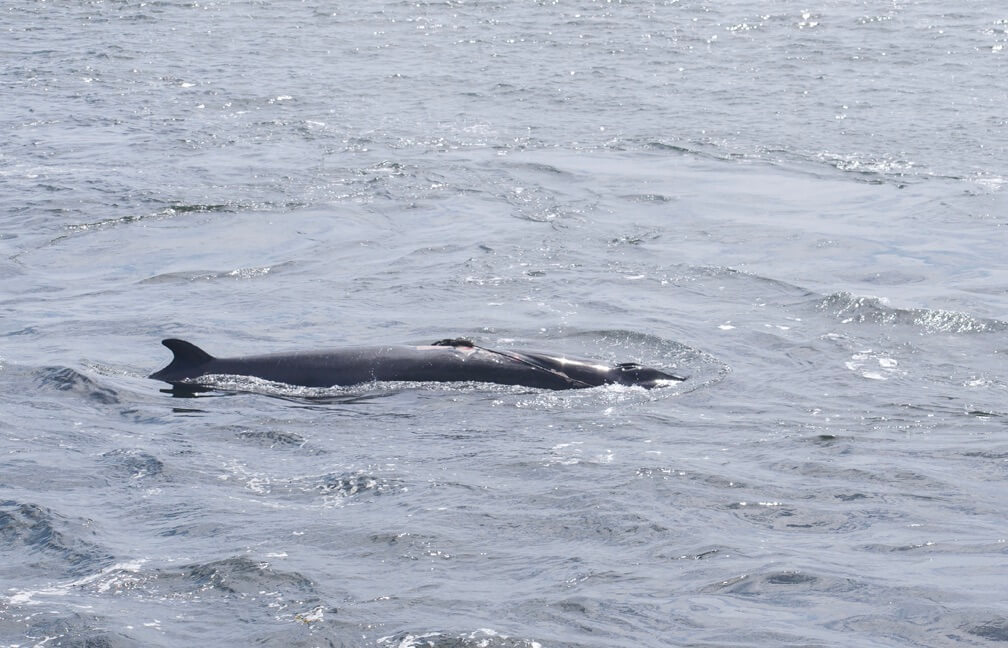 A minke whale ensnared in fishing rope was reported to the  Quebec Marine Mammal Emergency Response Network (QMMERN) by passengers of a whale-watching cruise on June 20. Today, the animal still has rope on its back, but is showing normal breathing and swimming behaviours. It was seen feeding with other minke whales.

Since the initial sighting, QMMERN has been working with the Saguenay-St. Lawrence Marine Park team as well as specialists from the New Brunswick-based Campobello Whale Rescue Team to draw up a response plan. This team and the Newfoundland-based organization Whale Release and Strandings are the only ones with the necessary expertise to obtain licences from Fisheries and Oceans Canada to carry out operations in eastern Canada. Disentanglement interventions require specific expertise and a great deal of practice to perform them safely for both the animal and the response team.

To attempt an intervention with an animal that is swimming freely and vigorously, one must be able to attach buoys and a satellite tag to be able to track it and possibly slow it down. In order to avoid causing the animal further stress or hurting it, specialists try to attach these buoys to the rope that sometimes trails behind the entangled animals. As of now, observations have not confirmed whether or not the animal is dragging ropes behind it.

If it can be confirmed that the animal is dragging rope, a team from Fisheries and Oceans Canada could attempt to attach a tag to the minke whale. Once the tag is in place, one of the expert teams could come and try to free the animal.

If a buoy cannot be attached to the minke whale, specialists request that the situation be closely monitored. If the animal grows tired and begins swimming more slowly, another approach could be attempted to free it from its ropes. These tricky operations can sometimes take anywhere from a few weeks to a few months.

What you can do

The minke whale was observed several times on June 27 from the shores of Grandes-Bergeronnes. If you see it over the next few days, take immediate note of its position and contact Marine Mammal Emergencies at 1-877-722-5346 (1-877-7baleine). If you have the chance, take photos or videos and promptly forward them to Marine Mammal Emergencies. This information will be valuable for evaluating response options, monitoring the evolution of the animal’s health and preventing future entanglements.

If you are on the water, it is essential to maintain an appropriate distance to avoid increasing the animal’s stress levels or creating any additional hazards. The animal could be dragging rope in its wake, which could in turn get caught in your watercraft or the engine thereof. Moreover, Marine Mammal Regulations stipulate that boats must stay at least 100 metres away from whales at all times; this buffer increases to 200 metres in the Saguenay-St. Lawrence Marine Park.

“First and foremost, do not attempt to disentangle the animal,” recalls Robert Michaud, coordinator of the Quebec Marine Mammal Emergency Response Network. “We often see videos on the social networks of disentanglements carried out by well intentioned individuals. On the other hand, a poorly executed intervention can cause even more harm to the animal or even lead to death. And the hazards that rescuers face when working with a wild animal can be significant.”