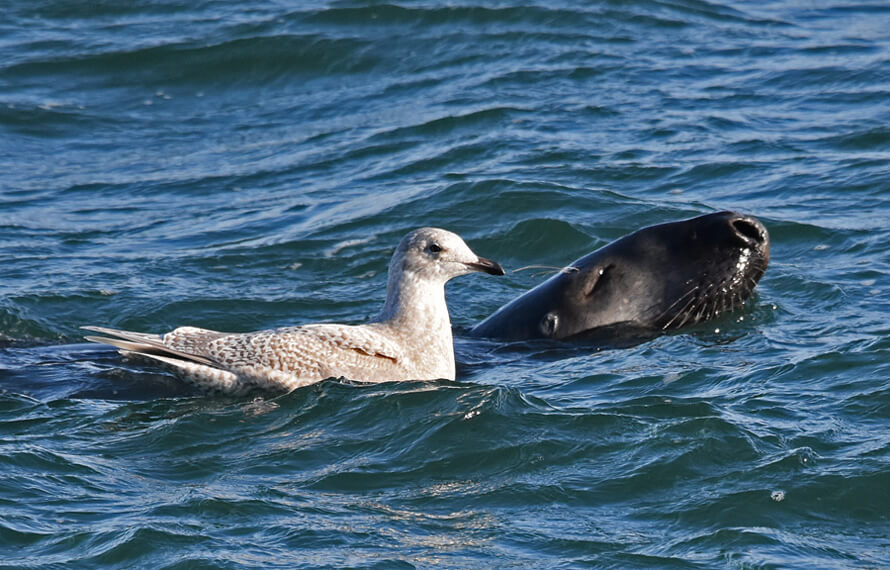 The last trip offshore for the year took place on November 4. Here is the second part of these Field Notes, accompanied by a large photo gallery.

Near the Prince Shoal Lighthouse, we spot a herd of a hundred or so gray seals and above them, over a hundred gulls (great black-backed, herring, but also a few Iceland and glaucous).

In the midst of the seals, the gulls are in a frenzy as they snatch up their prey from the surface: small fish, probably sand lance. Several photos show these fish in the gulls’ bills while seals were sometimes swimming just a few centimetres away! Several minke whales have also been frequenting this area.

A bit farther afield, northeast of Île Rouge, it’s “another sector, another scenario”… and other prey for other gulls! Here we find ourselves in the presence of thousands upon thousands of kittiwakes (and a few hundred Bonaparte’s gulls) pecking at the surface of the krill. I had never seen so many kittiwakes in my life!

Not far from these gulls, a fin whale that also probably spotted this massive school of krill.

We continue our course and cross paths with other birds: several thousand long-tailed ducks (who will spend the winter here in the ice-free waters), a number of flocks of shorebirds making their way south, and a few red-throated loons…

We also observe a few groups of razorbills that will certainly leave the area soon as well as a handful of Atlantic puffins, alcids that are rather uncommon in the area, but sometimes spotted this time of year near the tide rips far offshore.

And there you have it, another season is getting underway. The one that will have me pacing the shores of the St. Lawrence in search of potential marine mammals. A winter to admire the St. Lawrence, its whales, its birds, its beauty… from the mainland. See you soon!