End of November: Two Humpbacks and a Survivor!… by Renaud Pintiaux 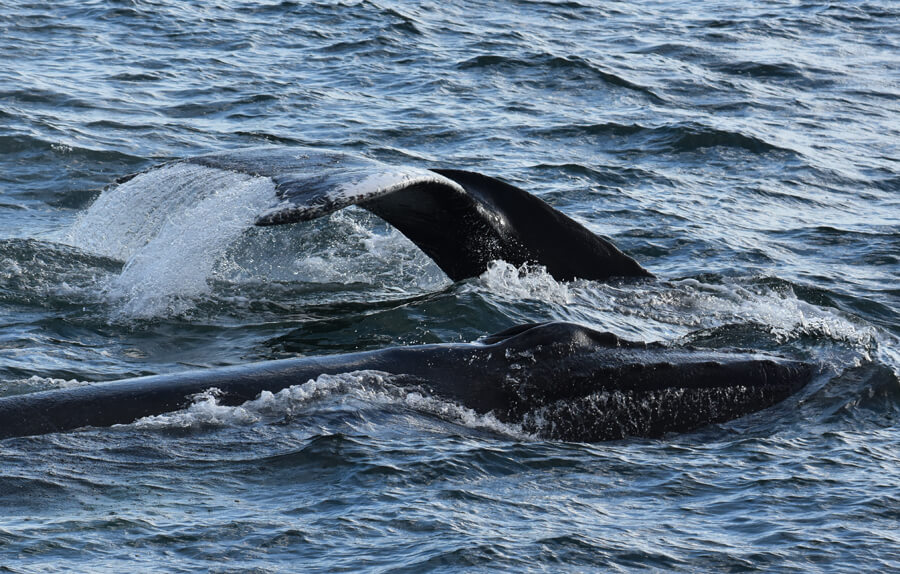 November 25, 2016, Cap de Bon-Désir: moderate winds from the northeast and a few flurries begin to fall this morning. All is calm. I observe two gray seals and a few belugas, but there are no big spouts on the horizon. I wait patiently for over an hour. Before leaving, I take one final gaze to the northeast with my binoculars. I see a big tail rise out of the water! A humpback diving and heading straight toward me! I wait and, 10 minutes later, two spouts appear (one large one and another smaller one). Not one, but two humpback whales swimming along the shore! I snap a few photos (see below). Quite a large individual and, at its sides, a smaller one that shows its tail when it dives. About 10 minutes later, they re-emerge from the depths, only much farther away. I take another distant photo, which shows these two marine mammals side by side, rapidly continuing their journey west.

I’m doubtful the photos I took on this day will allow me to identify either of these two individuals (I can’t see the “inner” face of the tail with any potential distinctive markings), but perhaps these two humpbacks will remain in the area for a few days. Stay tuned!  A pleasant surprise for late November!

November 28, 2016: sunny skies and a light breeze from the northwest. I spend three hours at Cap de Bon-Désir. I spot some fifty belugas, essentially large males. Amongst them, I observe an old regular in the area: the beluga known as “Survivant” (Translator’s note: “Survivor” in French). This individual was first photographed in… 1980! With its small closely spaced scars on its right flank, it is easy to recognize (see the photo taken this morning!). No fewer than three minke whales are still present in the area. I also spot three harbour porpoises, a few gray seals and a harp seal.

See my photos from November 25 to 28 below.
See you soon with more news from the Upper North Shore!

[metaslider id=22197]
GREMM research assistant from 2003 to 2009 and from 2012 to 2014, Renaud Pintiaux is a passionate observer and photographer. Year round, whether from shore or on the water, he takes every opportunity to observe marine mammals and birds in the Saguenay–St. Lawrence Marine Park.