Dozens of Humpbacks and Thousands Of Seals Linger On

With the short days of November and the appearance of the first ice, observers on the water are growing more scarce. Nevertheless, enthusiasts are braving the cold to see if any whales are still present.

Mingan Island Cetacean Study collaborator Jacques Gélineau heads out to sea with a friend on November 21. They are surprised to find approximately fifty humpbacks off the coast of Sept-Îles. “I managed to photograph 34 individuals!” exclaims Jacques. At the surface, he also hears bellowing. Have humpback whales already begun serenading? “Too bad I didn’t have a hydrophone, as it would have been interesting to hear what was happening under the water.” That same day, he also notes the presence of two blue whales, nearly a dozen fin whales and a few harbour porpoises.

Three days later, Jacques Gélineau goes out again. This time, just one minke whale would be observed. “Even from my own home, I’m not seeing any more large spouts offshore,” he remarks. Where have all the whales gone? Migratory movements are rather poorly understood. Winter weather conditions and the long distances travelled by cetaceans add to the complexity of monitoring. The Marine Mammal Observation Network trains the captains of merchant ships to identify whale species and share their observations with the organization. With a better understanding of the winter range used by marine mammals, perhaps we can better coexist with them?

In the Estuary, observers posted on shore have been enjoying magical encounters with whales and seals. From the wharf in Les Escoumins, at least five belugas are seen swimming in close proximity on November 21. Farther offshore, a few seal heads poke out of the water. In Baie-Comeau, a worker on the docks is delighted to see two minke whales.

On November 23, a captain that operates whale-watching cruises in the summer months turns his gaze offshore in Les Escoumins. No doubt about it, those are two blue whales he sees! What a pleasure it is to observe these giants again!

On November 26, on the rocks of Essipit, a birder momentarily turns his attention away from his feathered friends to identify eight belugas, a minke whale, twelve harp seals and two grey seals.

Off Île Verte, some 2,000 harp seals bask on shore and the adjoining thin sheet of ice. Such gatherings of harp seals are not abnormal, but their proximity to humans is surprising. The absence of ice at sea might explain why the seals have chosen this place to rest.

Harp seals visit the Estuary to feed. Females build their energy reserves before giving birth sometime between late February and mid-March. They can have a pup every year if they are healthy! If you spot a seal on shore, be sure to leave it enough space to rest and return to the water when it is ready. 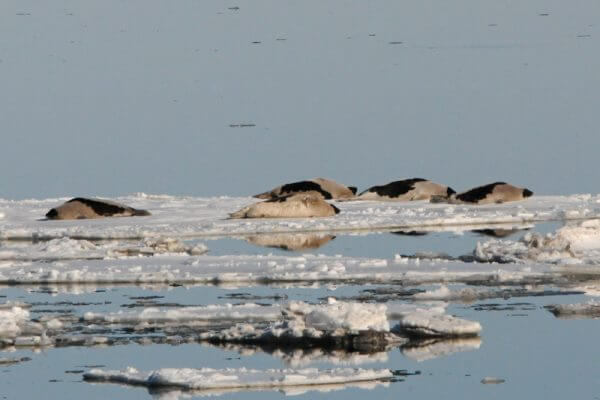