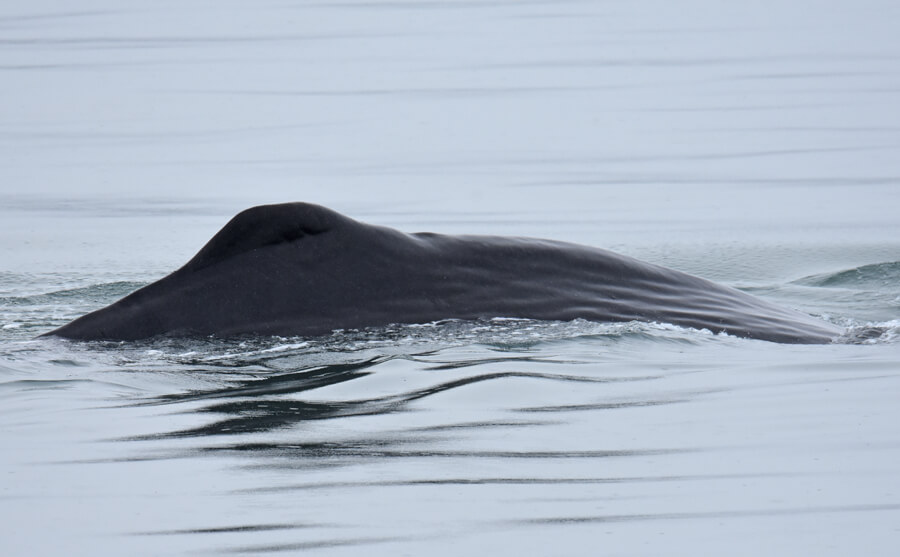 We all have our favourite species, including our favourite whales. For our collaborator Renaud Pintiaux, “The sperm whale is a species that fascinates me most in the world.” On October 29, he was lucky enough to cross paths with and photograph this noble animal opposite the snowy dunes of Tadoussac. You can read about his encounter in his Field Notes.

Although it is featured on the list of thirteen species that frequent the St. Lawrence, sperm whales have been rather scarce in the Estuary and in the Gulf in recent years. This has not always been the case. Between 1991 and 2009, sperm whales were spotted between May and October in the Estuary, generally in groups of 1 to 4 individuals; a gathering of 15 animals was also observed in 1997. The most faithful individual, Tryphon, died in an incidental catch in fishing gear in the St. Lawrence in 2009. Since his death, sperm whale sightings have been irregular, and visits, very brief.

However, this summer, a sperm whale was seen on August 19 and October 29. Was it the same one? To identify the individuals, researchers compare the colour patterns, the shape of the dorsal fin and body, and markings on the tail. The photos and videos taken in August are not clear enough to confirm with certainty that it is the same individual, but there is a resemblance.

Tryphon was first seen a couple of times one summer, after which he returned with other sperm whales and became a “regular” in the Estuary. Will we see a similar pattern with the sperm whale observed? The sharing of photos, videos and observations from the public and various research groups active along the St. Lawrence will help us track how the rest of this story unfolds.

Sperm whales were also observed this summer in the southern Gulf of St. Lawrence by research teams from the New England Aquarium, Dalhousie University and the Canadian Whale Institute. The research assistant writes that she was surprised to have encountered this species this year, a first for her, even though she had been conducting censuses in the area for a few years. The photos and data will be transferred to the Group for Research and Education on Marine Mammals(GREMM) for our catalogue of about 30 individuals.

Minke whales, fin whales and belugas have also been observed in Tadoussac this week. In Les Escoumins, on October 30, one observer was walking towards the docks known as Quai des Pilotes. During the few minutes that he spent there looking at the sea, he was able to observe a lone minke whale.

In Sept-Îles, the weather conditions of the past few days have made observations difficult. “Sea conditions are rough, with considerable waves and fog,” says our regular observer Jacques Gélineau. Nevertheless, he spotted two minke whales surface feeding north of Île Grosse Boule.

During a stroll in Cacouna on October 30, two hikers aimed their binoculars at a group of three to four belugas swimming in a tide rip near the upstream tip of Île Verte. “We were able to watch them for a good half hour before continuing on our way,” they exclaim.