Driving over 500 km to See Belugas 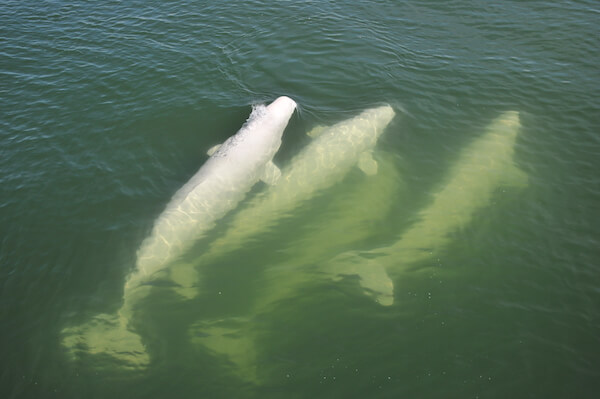 “Beluga-watching in winter!” exclaims a Whales Online subscriber after reading the Field Notes Still Plenty of Belugas on the Upper North Shore. Inspired by the words and images, he decided to drive all the way from Montréal to try his luck at seeing these white whales. Well worth the effort! Soon after arriving in Les Escoumins, he discovers about twenty belugas not far from shore.

What are these belugas doing here in the middle of their summer habitat in winter? In the summer, we know that the population is concentrated in the Estuary and the Saguenay Fjord. But in winter, its distribution is not as well documented. Although data collected in the 1940s and aerial surveys in the 1990s provide information on the presence of belugas in the downstream portion of the Estuary and in the Gulf of St. Lawrence in the winter, information remains rare and sporadic.

Belugas appear to concentrate in areas where ice is normally present and provides protection from rough winter waters. The beluga is an Arctic whale that is particularly well adapted to icy conditions. At the mouth of the Saguenay, waters remain ice-free year round. Tides, submarine relief and currents cause deep, warmer waters to rise up to the surface, which prevents the formation of ice. This phenomenon is known as a polynya and in the Arctic, these places are real “oases” for animals, bubbling with life in these deserts of ice. Many northern belugas spend the wdriving-over-500-km-to-see-belugasinter in channels and polynyas, while in the summer they inhabit shallow bays and estuaries. For St. Lawrence belugas, the mouth of the Saguenay is a summer habitat and is rarely frequented in winter.

Several contributors confirm: ice sometimes accumulates near the shore, depending on the strength and direction of the winds, but this winter it is thus far absent off the coast. A recent study by Fisheries and Oceans Canada indicates that the winter ice cover in 2016 was the third lowest in nearly 50 years and that five of the least “ice-covered” winters since 1969 have occurred in the last seven years. Will there be any long-term impact on the whales of the St. Lawrence? Will certain species prolong their feeding season in the St. Lawrence given the lower risk of getting trapped in the ice (in French)?

After reports of several large rorquals last week off the North Shore, sightings are down this week. Perhaps it is due to the low temperatures that discourage observers from braving the cold or the sea smoke that masks the whales’ spouts? All the same, the captain of the ferry NM F.-A.-Gauthier noticed the presence of a humpback on February 3, 4 and 5 near Godbout. The animal lifts its tail when it dives. A week earlier, two humpback whales were spotted in the Franquelin area.