Return of Whales to Côte-Nord 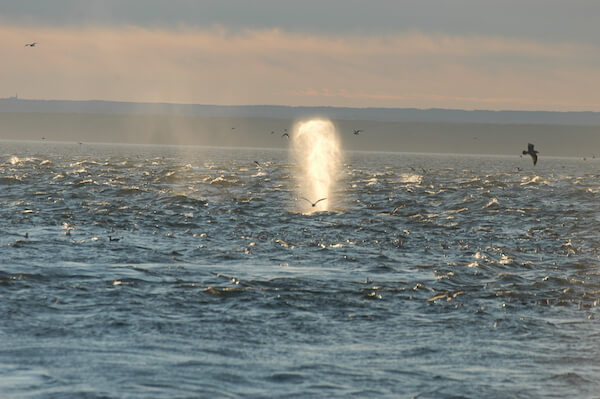 Measuring 15 to 20 metres long and weighing in at 35 to 100 tonnes, large rorquals swim beneath the water surface, marking their presence with but a spout that lingers a few moments in the air, provided that winds are weak or absent altogether. In recent days, excellent visibility, low winds, and a lack of ice have enabled several observers on the North Shore to spot these large spouts. These blasts are the result of the condensation of the hot, humid air that comes out of the whales’ lungs and comes into contact with the cold outside air.

In Sept-Îles, “high and straight” spouts were reported by various observers on January 28, 30 and 31. Fin whales or blue whales? The spout of these two species is described as a column reaching four to six metres high – even occasionally exceeding six metres in the case of the blue whale – which can be seen and heard up to several kilometres away. On February 1 in Godbout, two to four large whales are also spotted. The exact species was not identified, the animals being about five kilometres from the coast.

On January 29 in Franquelin, a collaborator spots two distinct large and straight columns. She suspects they are two fin whales. Later that same day, also in Franquelin, a birder is pacing Pointe Paradis when a distant blast catches his eyes. With his spotting scope, he discovers four large whales, two of which appear to be humpbacks. He’s unable to observe their tails, as the animals do not dive, but he does see their long white pectoral fins emerge from the water. He even thinks he glimpsed one of the tail flukes of one of the two individuals brush the water surface. Are they feeding? Perhaps. Humpback whales are “gulpers” that feed on crustaceans and small fish (herring, capelin, sand lances). The intense activity of the past few days in the Franquelin area – whales, seals and birds (about 800 goldeneye, gulls, red-breasted mergansers, black guillemots, black ducks and mallards) – gives us a good idea as to the amount of food in these waters.