Does the limited amount of ice on the St. Lawrence affect the seal species that spend the winter there?

Seals adapt to changes in ice formation on the St. Lawrence. © Marcel Cousineau

This year, the decline in ice cover on the St. Lawrence, a trend that began a few decades ago, is particularly pronounced. However, the various species of seals that live seasonally or year-round in the St. Lawrence have adapted to the presence of pack ice, especially for pupping. The absence of ice worries some of our observers: might it have an impact on the seals of the St. Lawrence? For Mike Hammill, research scientist and head of the Marine Mammal Section at DFO’s Maurice Lamontagne Institute, the answer is yes, especially for grey seals and harp seals. He shares his observations with us on the subject.

Ice on the St. Lawrence is an important resource for harbour seals and grey seals, and especially for harp seals. When it is sufficiently solid and expansive, sea ice allows females to give birth to their young while staying safe from predators. “In October and November, individuals swim up the St. Lawrence. They often go to Tadoussac to search for food until February. Then they head downstream toward the Magdalen Islands and throughout the Gulf of St. Lawrence,” explains Mike Hammill. Every year, the pack ice around the Magdalen Islands hosts females who give birth to a “whitecoat” in late winter.

In recent years, however, this reality has changed and water temperatures are rising in parts of the Gulf and Estuary. Harp seals are believed to be the most vulnerable to this change in the ecosystem, points out the researcher. According to the results of a 2014 study, harp seal pups have a poor survival rate when born on land.

“Females will hardly ever give birth on the beach,” explains the biologist. Almost systematically, when a seal pup is on the beach, it will die, either abandoned by its mother or eaten by a fox or coyote. This species is not suited to give birth on land, though we don’t yet know exactly why. They often suffer high mortality when the ice disappears.”

The survival of the whitecoat is compromised if it is born on a beach or an island. © D. I. Jeske

Another region offers more favourable conditions. “When there is no ice, instead of pupping in the Gulf of St. Lawrence, mothers will likely give birth off the coast of Newfoundland. There is a colony there and, when the seals see that the ice is absent in the St. Lawrence, they sometimes head to Newfoundland,” explains the specialist.

Grey seals are found all along the North Shore. The late arrival of ice this winter has been prompting many females to choose to give birth on dry land. They can adapt to it and their newborns usually survive. The mortality risks are higher, however. “If space is limited on a beach where females have given birth, there will be more males nearby. The pups are therefore at risk of being trampled or bitten by a male. Sometimes there is dirt or droppings, which can cause more sanitary issues than on pack ice. Coyotes can also prey on the pups,” points out the researcher.

The reduced pack ice still retains its appeal for some mothers, who venture out to give birth there. Complications are to be expected: if the ice is too weak, for example, pups can fall into the water. Mortalities are more frequent in this context. This winter, Mike and his team have seen few grey seals on the ice floes due to very sparse ice cover. 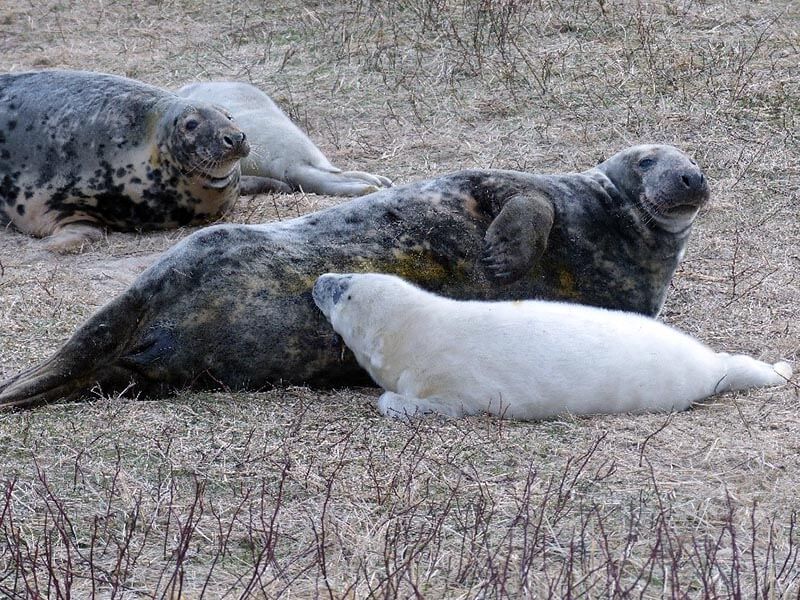 Harbour seal pups, on the other hand, are born at the end of May, when ice is generally absent. This species is not likely directly affected in this regard by dwindling ice, though harbour seals have been observed resting on pack ice in winter. Does this reduced ice cover have an impact on harbour seals’ needs other than pupping? To be continued.

On Anticosti Island, new colonies of grey seals have been discovered in recent years. Mike Hammill confirms that these colonies didn’t exist at the start of his career. He attributes this change to milder winters, a favourable condition for pups.

However, his predictions for harp seals in the St. Lawrence in winter are not overly optimistic: “I think that 50 years from now, if conditions remain the same as they are now, harp seals will disappear from the Gulf.” He believes that, some years, ice cover on the St. Lawrence will be sufficient to accommodate the population that comes here to winter. However, in the long term, their arrival will be increasingly uncertain due to light ice cover. Research on this marine mammal will potentially be more active in Newfoundland, as harp seals are likely to favour this pack ice due to the fact that it is more reliable from year to year.